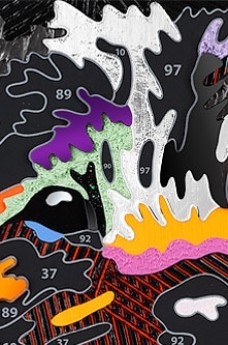 The artist, born in Tübingen (Germany) in 1970, studied at the State Academy of Art and Design in Stuttgart and Karlsruhe. He has lived and worked in Berlin since 1997 and since 2009 has held a position as a professor at the University of Fine Arts in Hamburg.

The exhibition in the Parisian gallery combines pieces from different periods of his work. It includes his latest pieces, such as the "paint-by-number" and "neon foil paintings" as well as his sofa objects and porcelain sculptures.

In his recent work, Anselm Reyle has focused on figurative motifs, the patterns of which are based on "painting-by-numbers", an idea that is popular among children and amateur painters: here, the image is dissected into individual sections that are labelled with numbers. Each number is assigned a particular colour so that together the different coloured sections form a homogenous image. Instead of appearing as a naturalistic reproduction, each of Reyle’s motifs is dissociated from its original context, with individual sections of the image being enlarged in a zoom-like manner. Details that often go unnoticed within their figurative sources grow in their compositional structures to become independent, abstract images.

The materials used for the individual parts– including structural pastes, plexiglass mirrors, acrylic paints and holographic glitter – can also be found in the artist’s earlier works, such as the "stripe paintings" and the Otto-Freundlich series. As opposed to painted patterns, Reyle’s pieces are structured more like a collage – the objects are painted, stuck together, sprayed and then cut out again.

Some sections are left untouched: they are still labelled with numbers and therefore pointedly suggest a mechanical production process, which conflicts with our notions of the romantic ideal of the artist. In contrast to this impersonal method of production Anselm Reyle endows the paintings with his own trademark signature – a splotch with drops of paint – which documents the original character of the work.

With the open image structure suggested by the empty sections, the artist establishes a provocative, ironic association with the topos of the artistic concept of the "finished/unfinished" as it was discussed following Cézanne in the modern period.

Reyle’s work is characterised by the repeated use of certain found objects and materials from a kind of repertoire, which serves as the basic structure for his designs. These objects can also be identified in his "agricultural" objects and sofa sculptures, which were created out if his fascination of the Italian-based Memphis design group founded by Ettore Sottsass in the early 1980s, instead of following the dominant trend toward formalism, the group’s pieces appealed directly to the viewer’s senses with their narrative, poetic vocabulary as well as the combination of styles from both conventional decoration and design icons and a spectacular mixture of materials. The Memphis Group enjoyed a brief heyday, which was followed by a flood of cheap imitations, and soon after the members of the group went their separate ways. This development drove Anselm Reyle to respond critically by purchasing these poor copies on eBay – the trashy furniture of the 1980s – and sending them through yet another stylistic transformation. Along with their coverings, which are made of a range of wild, dissonant colours and materials, the sofas mutate into three-dimensional colour-field paintings: Plush shag, imitation leather, neo-baroque floral ornamentation and gleaming silver material create both an exciting contrast and a point of conflict.

In his "neon foil paintings", Reyle calls upon a language of form that is far from "high art". Here, he pulls delicately coloured neon lights out of their context in commercial, urban illumination and allows them to speak in emblematic gestures in front of a textured, dynamically charged field of folded material. Arranged in a transparent, plexiglass box, these installations conjure up associations with the fetishistic display of goods in our consumer culture.

His porcelain sculptures, which were created during his cooperation with the Meissener manufactory, are displayed in a traditional museum fashion: the pieces are shown in a glass vitrine and mounted on a velvet-covered background. This form of display, which appears to emphasise the exclusive character of the pieces, in fact evokes a more ambivalent impression upon closer inspection of individual elements: flawed products and useless residues, such as deformed and broken cups, fragments of figures and floral details, are all piled up on top of one another – indeed items are thrown together in an seemingly random way. However, having been double-fired and lasered, these pieces go through the same technically complex production steps as the traditional porcelain that is hand-crafted by specialists, and this returns a sense of esteem to the objects. While classical collectables and cabinet pieces feature minute painted detail, Reyle’s objects present a different format as well as a monochromatic colour palette. The glossy, cool white finds its match in his shimmering, pearl-coloured white earth paintings and counteracts the visual impression of the neon colour palette that is otherwise typical of Anselm Reyle.

Almine Rech Gallery will also exhibit work from Reyle’s long-term collaborational project with Austrian-based artist Franz West, this is the first time work from this project will be shown publicly. As part of this collaboration, discarded materials, found objects and rubbish from day-to-day work in the studio are exchanged between Vienna and Berlin, where they are developed and changed by the other artist as part of an assemblage process before being sent back. Characteristic elements selected for each object are subject to an (unpredictable) process of change as part of an artistic dialogue. Even if the viewer believes that he or she can identify stylistic details as "classic West" or "classic Reyle" upon first glance, each artist’s language of form is altered during this synthesis to create a newly formulated appearance. Specific details of the sculptures are reminiscent of functional objects such as lamps or chair fragments, which may ultimately maintain their practical use and evoke a humorous response due to the wide range of materials and colours used.

Based on this wide range of genres and materials, an important aspect in Anselm Reyle’s work is the adoption of well-known symbols from a vocabulary outside of the arts as well as from the canon of modern art history, symbols that have been stripped of their meaning by exaggeration. By breaking out of this societal hermeticism and transforming these images into a new language of form, these works help to develop new levels of understanding and encourage the viewer to reflect upon the prevailing codes of taste. The artist intends to provoke critical ideas about one’s own viewing habits and ultimately expand upon the standard, stereotypical understanding of art.