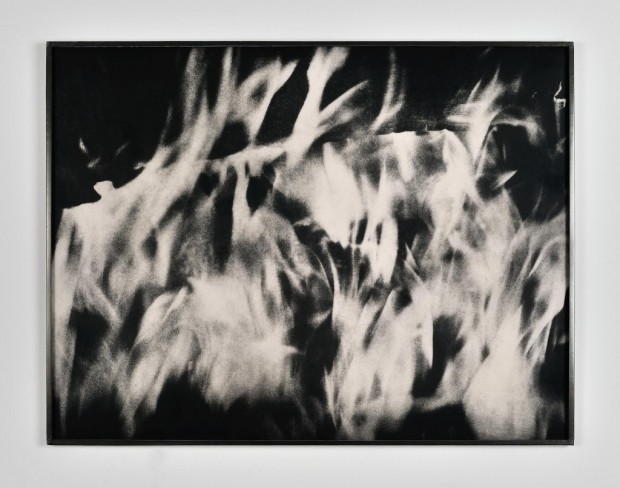 The Almine Rech Gallery is pleased to announce its second solo exhibition of Beatrice Caracciolo in Paris.

Working from photographs that she transforms through a process in several stages, Beatrice Caracciolo has created engravings, photoengravings and collages in black and white on the theme of Fire. This series is the third step in her work devoted to the four elements, and it will be shown here for the first time in its entirety. It follows the series devoted to Earth exhibited in 2012 at the Almine Rech Gallery, and the series devoted to Water that was presented the same year at Château de Haroué in France.

Book burnings have left a lasting impression on our retinas in the past. History has accustomed us to these book burners, to those who organize these word-destroying autos-da-fé, when the flames consume the contents. In an attempt to alter history, Beatrice Caracciolo has now created books of fire, restoring the flames to their rightful place on the side of creativity.

Before photographing the fires, the artist spends long hours admiring them, seated before the fireplace. The hypnotic fascination that fire exerts on humans distinguishes us from other animals that flee from fire since they only perceive its dangers. In the face of fire, man stays put, tamed by the flames.

Beatrice Caracciolo fixes her gaze on the tumultuous flames before capturing them on film. In the past she had already developed a passion for streams and the movement they create as they cascade downhill. She has followed the same approach with fire.

Beatrice Caracciolo is an Italian artist. She has lived in Naples and Rome and studied at New York University and Columbia University before following a degree course in art at the New York Studio School. Since the 1990s her work has been shown in numerous exhibitions in the United States and Europe. In 2010 a retrospective was devoted to her work at the Villa Medici in Rome. She lives and works in Paris.
www.galeriealminerech.com