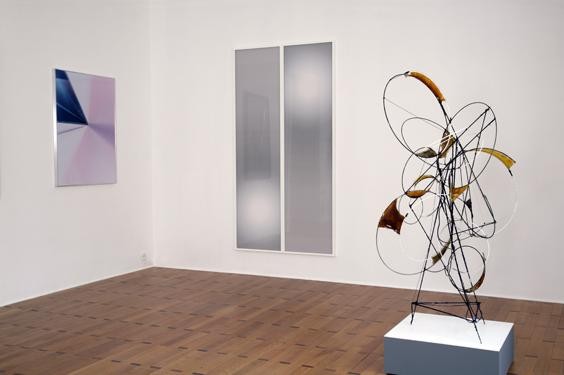 The idea of this show started basically on wanting to confront two bodies of works
by veteran artist/photographer Barbara Kasten and mid-carreer artist Eileen Quinlan.
Noticing also a major resurgence of works by younger artists recently directly
inspired by the "constructivist" and "suprematist" movements, it seemed timely
to explore this phenomenon whether in a formal or more literal manner.
A key group of artists were selected from the stable of the Almine Rech gallery,
namely Katja Strunz, Gregor Hildebrandt, Haim Steinbach and Anselm Reyle.
In order to establish the "lineage" it was crucial to include some of the pioneers
by selecting works and names being at the foundation of the movement : Kasimir
Malevich, Alexander Rodchenko and Laszlo Moholy-Nagy.

This exhibition although not an academic attempt tries to make unusual choices
of works and artists ranging from the late 30's to today by covering each decade.
Japanese artist Akira Kanayama directly issued from the Gutai movement and
lesser known in Europe and US seems to fall naturally in that category with works
more reminiscent of the suprematists than the typical Gutai.
Representing the drawings and collages by american artist Burgoyne Diller is a
direct quotation by a lesser known american "suprematist" of the 60's.
Surprisingly the optically constructed and little know black and white photogra-
phs from the 50's by Raymond Hains complement an interesting dialogue with
Moholy-Nagy late color photographs.
In a more direct quotation the works of Katja Strunz, Florian Pumhösl or Camilla
Løw are a direct attempt at quoting the works of their peers in a fresh manner
whether by choice of the medium or the presentation of the works themselves.
Haim Steinbach adresses the notion of the "construction" itself. By including a
much lesser and primitive early work and a more recent one (titled "El Lissitsky")
he denitely addresses his sources and inspiration. Frank Stella continues to
explore the constructive elements using his personal vocabulary.
With Liz Deschenes we seem to explore the renement of a movement both
aesthetically and formally with the direct references disappearing and remaining
as a trace. It resonates very clearly also in R.H. Quaytman series of works and
chapters primarily with the use of her borrowed references and her system of
presentation. Through reappropriation, Sherrie Levine continues to quote and
offer reection about time and history.
Anthony Pearson's use of unique photographs/photograms combined with sculp-
ture continues to challenge and questions forms of representation and presenta-
tion.
Gregor Hildebrandt and Matthias Bitzer follow that same road in their collages
and the pinnacle is reached by the explosive aspect of Anselm Reyle's recent
piece for the show.
www.galeriealminerech.com