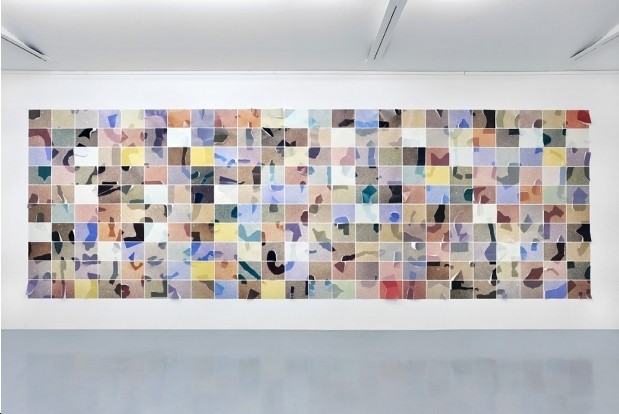 Almine Rech Gallery is pleased to announce the first solo exhibition of Curtis Mann in Paris.

In Openings, Mann displays several new bodies of lens-less photographic work. Through a series of bleaching, cutting, and folding techniques, Mann has continued to engage in the delicate, purposeful effacement of photographic paper. Deriving influence from American artist Gordon Matta-Clark (1943-1978), who often cut directly into, and removed entire sections of, abandoned buildings, Mann likewise “unbuilds” materials as a paradoxical means to comprehend their structural potential. How, Mann probes, can information be revealed through the marking of its absence?

For the series C.I., Mann examines this disparity between the qualities of positive and negative space. Using a process he has developed – “misting” bleach onto already-developed photographic paper – Mann has masked off shapes derived from documentation of Matta-Clark’s 1975 project, Conical Intersect. The resulting, near monochromatic white-on-white photographs are at once flat and dynamic, recessed where the chemical has eaten away at the paper’s surface, and protrusive where it has not. As with the process of intaglio printmaking, which uses acid to bite away at the plate, Mann has utilized bleach in a counterintuitive way: to reveal, rather than to blanch. As with the original Conical Intersect, these images possess a portal-like quality – a disruptive, if ethereal, opening where one least expects it.

Mann has systemically defaced the surface of exposed black photographic paper in the series Paper Cuts. In clean, horizontal, vertical, and arching lines, the artist scores a sharp blade along the surface, removing thin layers of dense emulsion. The lines, made without a ruler or drawing device, are straight though never perfectly so, referencing the immediacy and fallibility of the exacting process. Paper Cuts enacts the action of applied erasure as a form of anti-drawing. In Mann’s mission to comprehend the object – much as he manages with bleach – he has inexorably undone his very material, dismantling the piece in the process of generating it.

In a final set of small, collaged works entitled Paper Fragments, Mann grapples with the implication of Matta-Clark’s generative influence. The series takes a number of images of Matta-Clark himself at work in the studio – framed behind glass by Mann, who removed them directly out of a book he owned onto which he adhered shards of his own abstract, chemically-treated photographs, obscuring the majority of portrait beneath. The pieces, aside from being the most representational in the show, are the most provocatively conflicted. In concealing the image of the late artist beneath his own creation, Mann both admits to and denies the potency of Matta-Clark’s influence. Herein lies some clue: Mann’s paper, though on top, is affixed to the glass. The two are connected, but may never touch.

Born in 1979 in Dayton, Ohio, Curtis Mann lives and works in Chicago, Illinois. He was most recently exhibited in the Whitney Biennial 2010, curated by Francesco Bonami and Gary Carrion- Murayari and recently had a solo exhibition at the Jewish Museum of Contemporary Art in Kansas City, MO.
www.galeriealminerech.com