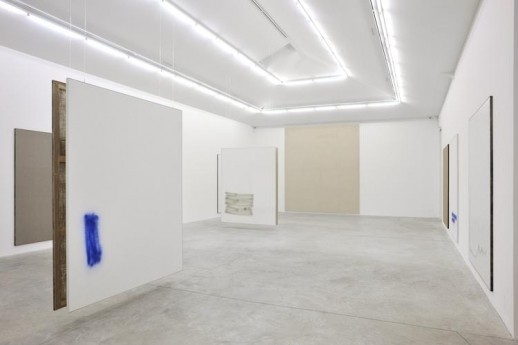 The title Das Goldene Scheiss contains a pun on the use of the articles der and das, and means ‘the golden shit’. It is also the title of a small figurative painting he did in 2004 which depicted a boy with a rolling pin positioned next to a white van against an abstract background. This painting no longer exists. It was destroyed a few years ago in a devastating fire in the artist’s studio, along with all his other works from that time.

The twofold usage of the title is not only evocative of a renaissance but is also a reference to Ostrowski’s past and thereby underlines the coherence in his development.

Since then he abandoned figuration, as if he had tested its limits and started to tackle those of abstraction. Nevertheless, Ostrowski hardly gives a thought to the status of his medium. What interests him is the act of painting itself. His works constantly allude to one another, reflecting and overlapping, as though to poke fun at and elude the issue of painting in general and of his practice in particular. This contradiction reverberates in the two elements that make up the exhibition’s title: gold and shit.

Many of the paintings have the same title and form part of a series he calls F Paintings. We learn nothing more about this generic title, except that it seems to have simply been chosen because of a graphic affinity for the letter F, the artist’s favourite in the alphabet.

Amongst other interpretations, F stands for ‘Frame’. Ostrowski frames most of his paintings and considers this element as part of the painting itself. Building the support for the work, assembling the structure, stretching the canvas and preparing it with the right coating are all part of the painting’s elaboration and completion.

This is not the case for the works in the series Outline Paintings, subtitled F (A thing is a thing in a whole which it’s not). These works are not framed. They are thicker; their borders are wider and more self-sufficient, adding a sculptural dimension to the canvases. They all reproduce a similar drawing, consisting of a rectangle of spray-painted colour, following the paintings’ borders and four corners which symbolically frame either a black or white void.

The artist uses the basic colours red, blue, green, black and yellow, which are often applied five times in the same, overlapping motif or sometimes in a single motive. The stroke is imprecise and serves to demarcate a space or the centre of the painting. This space is generally white but is sometimes filled in with a large black area. The German term for colour is ‘Farbe’. ‘I don’t really like these colours’, Ostrowski says. ‘I use them to get used to colour. I’m testing them’.

The series F (Between two Ferns) is probably one of the artist’s most emblematic so far. It consists of an endlessly repeated motif that has been spray-painted in blue on a white background. The process of choosing titles is part of the paintings but often stays unintelligible for the viewer.

F also stands for ‘Failure’. Ostrowski does not always successfully pull off his paintings. Each one is a new challenge, and he has only one chance to get it right. He does not spend all his time painting, but also contemplating, reading and listening to music – any kind of music – from country to rap, German pop to Taylor Swift, who has also become incorporated in a title: F (Taylor Swift).

Ostrowski’s approach to painting is unpredictable. When the artist is ready, he sets to work. Sometimes a simple coating of lacquer will suffice, or a straightforward drop of gloss paint, a piece of tape torn off a white background, a hessian canvas with water stains, or a piece of paper stuck to the canvas. Ostrowski works at the limit of painting, paintings which are sometimes not even painted. Meditative and sensual, the act of painting is reduced to its simple constituents, the sometimes invisible atoms of information of a whole which it wishes to convey. Ostrowski reaches the core of painting by drastically simplifying its effects.

The list of names and adjectives that make up the series of F Paintings continues. Take F for ‘Foot’, for instance. Ostrowski is obsessed with women’s feet even though he claims not to be a fetishist. When a woman visits his vast studio, he will sometimes ask her to walk on a canvas, thereby leaving her footprints upon it. The canvas will be complete with that fleeting, dusty trace that forms a new episode in the series F (Even the most beautiful woman ends at her feet).

F also stands for ‘Format’, his favourite being 240 x 190 cm. It is always consistent, and he repeats this format here for his Paris exhibition. F also stands for ‘Flying’. Ostrowski sometimes wants his paintings to fly and accomplishes this by occasionally hanging them from the ceiling in the middle of the exhibition space. However, true to his contradictions, Ostrowski is also willing to have them placed on the floor. In the studio, they rest on empty spray paint cans. ‘Hanging is like a puzzle’, says the artist. ‘There’s only one solution and no plan B’.