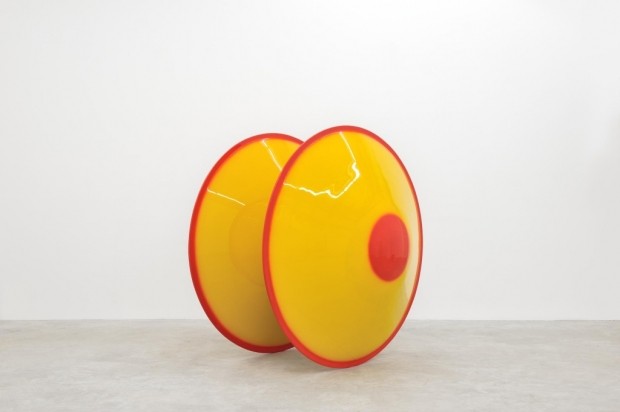 The Sensual Substance of the Sky:

The Art of DeWain Valentine

All the work is about the sea and the sky. I would love to have somehow a magic saw, to cut out large chunks of ocean and sky and say, “Here it is.”

I am now having an affair with the sea and the sky.

Almine Rech Gallery is about to present an exhibition of painting and sculpture by Californian artist DeWain Valentine (b. 1936). This will be the gallery’s first solo exhibition of the artist and the second to be held in Europe, of this artist who represents one of the most important veins of artistic creation in Los Angeles that developed in the mid-1960s, often referred to as Light and Space (in parallel, and somewhat in opposition to New York-based Minimalism).

History is not a seamless string of dates that covers everything of significance that happens at a given date: there are plenty of holes and lacunae in the way history is written. From the mid-1940s to the 1970s, critical attention was mostly absorbed by what was happening in and about New York City : a few decades later, one has rediscovered that there were other centers of creative energy and experimentation, just as important as New York, that had fallen off the radars of official Art History. Artistic centers have almost always impacted the way we think about and value art : in the 18th century, it was Rome; from the 19th century up until the 1930s, it was Paris; from World War II until the 1970s, it was New York.

The early historical chasm between the two coasts has led to opening up a more fluid dialogue between the two coasts, as works by New York Minimalists (Judd, Flavin, Jo Baer) are seen, at MoMA again, in the context of L.A. 'Light and Space' artists, like DeWain Valentine, Craig Kauffman, John McCracken (whose work was exhibited at Almine Rech Gallery as early as in 1991).

The present exhibition of Valentine's work at Almine Rech Gallery can be seen in this new historical context, and constitutes another important step in the vast reappraisal of the important artistic force that developed in L.A. in the 1960s, and of Valentine's major role there up to now.

The show at Almine Rech Gallery, a comprehensive overview, offers a unique opportunity for audiences to delve into Valentine’s work, one of remarkable technical virtuosity and perceptual experience.

Spanning across several decades, different and utterly fascinating plastic-based media and technical methods (not traditionally used in Modernist sculpture), DeWain Valentine’s production has continually embodied a unique, quintessentially Southern Californian aesthetic. He is best known for large-scale, translucent resin cast sculptures in a variety of apparently simple, geometric shapes - that vary none the less greatly from the Minimalist grids and cubes. In short, artists such as Judd and LeWitt were concerned to achieve more a mechanical perfection, heightened by an interest in mathematic (or combinatorics). Valentine, on the other hand, was much more interested and excited by physics than by mathematics : his final goal was to endow his sculpture with a perfect gloss, a perfectly smooth 'finish' (which would take weeks and months of arduous physical efforts.) His concerns with surface transparency and translucency, the use of industrial materials and processes, an emphasis on the qualities of prismatic color, and interest in the viewer’s perception and interaction connects him to the so-called Light and Space movement from the 1960s and 1970s. Overall, what should be emphasized as a principal and distinctive feature of DeWain Valentine's art (and his personality) are an unwavering attachment to an aesthetic of pure visual and haptic joy, and to a sensual, and uplifting celebration of outdoor life in the California of the 1960s.

The work of the Light and Space artists, who gathered around the fledgling, yet intense, art scene located on the coast of Venice, California, was influenced by the distinctive and unique qualities of the atmospheric landscape of Los Angeles, evoked by Clarence Thomas Urmy, a late 19th century poet from California:

The measurement of time and space,

The depth of deepest seas,

The distance of the faintest star —

Noted for ethereal, luminous or shiny surfaces, the works by these artists not only evoked the Angeleno qualities of bright sunlight, filtered through expansive, foggy skies, but also relentlessly explored the viewer’s perceptual experiences, and the properties of non-traditional, industrial synthetic materials, which became available during those decades due to the booming postwar aerospace and manufacturing industries. According to Catherine Grenier, curator of the exhibition Los Angeles 1955-1985. Birth of an Art Capital (Centre Georges Pompidou, 2006), “If there is a single vector channeling Los Angeles artists as a whole [...] it is the value set on experiment.” Artists included under the umbrella term of the Light and Space movement includes Peter Alexander, Larry Bell, Mary Corse, Robert Irwin, John McCracken, James Turrell, Craig Kauffman or Helen Pashgian, and, of course, DeWain Valentine -- although it should be said, as often in any group or movement, that few of these artists accept comfortably this label, or any label. Almine Rech Gallery's history is closely associated with this group, however : it is important to signal that the Gallery opened its first show with James Turrell (this was the first European gallery exhibition Turrell had in November 1989 in Paris); and in 1991, Almine Rech Gallery proposed the first exhibition of John McCracken in Paris.

‘Finish Fetish’ is another category employed to characterize the production of some of these artists, such is the case with DeWain Valentine. The term, often used by artist, critic and museum curator John Coplans, alludes to the embrace of new industrial technologies, surface slickness, and glossy, attractive colors. This love for the shiny, spruced up quality of the slick surfaces offered a common syntax to these artists, but spoke far more to the ubiquitous Southern California’s surf and automobile culture, than to the search for perfection that characterized East Coast Minimalism (conjuring industrial, mass production of geometric structures in perfect line with each other), whereas Valentine's surfaces are the result of painstaking physical act of sanding, and polishing an initially rough resin surface into a perfectly glass-like smooth surface.)

DeWain Valentine was born in Colorado, and arrived in L.A. in 1965 to teach a course in plastics technology at the University of California, Los Angeles (UCLA). He is regarded today among the earliest pioneers in the use of industrial plastics and resins to execute monumental sculptures that reflect the light and engage the surrounding space through its mesmerizingly translucent surfaces that arrest one's gaze. The artist’s first experience with plastics dates back to 1946 during a Junior High School course. He started to experiment with this kind of industrial materials at home – including fiberglass, recently declassified by the United States government after the Second World War – baking, molding and casting them. This technical knowledge, combined with his subsequent experience working with fiberglass-reinforced plastic in boat-building shops and painting automobiles, air planes, -- and even, according to some even, UFOs -- led to his fascination and artistic involvement with sculptures made out of colored plastic and polyester resin, all materials evoking a futurist era.

Valentine’s technical excellence and inventiveness made him stand out from his contemporaries, namely through his remarkable contribution to the plastics industry. Willing to take risks, in 1966 Valentine carried out some experiments collaborating with a chemical engineer, and developed a new type of modified polyester resin that would enable him to cast monumental objects in a single pour -- a technical process that was just unconceivable until then. It was commercialized under the trade name of Valentine MasKat Resin. He thus started to work with this strong, stable and clear resin, creating larger than human-size sculptures that were integral to the architectural setting and functioned as space-modifiers, altering the spectator’s perception of the environment.

On view in the exhibition are both large-scale and smaller size colored sculptures. They range from simple geometrical forms, such as slab columns or solid circles fabricated in cast polyester resin, to brightly spray-painted concave disks made of fiberglass-reinforced plastic. Whichever the format or the color, the artworks, with their smooth, highly-polished translucent surfaces explore the material’s ability to carry and reflect light. Valentine is concerned with the transparent and diffractive qualities of spectral color, whose prismatic break-up effects become evident to the viewer with fluctuating light conditions.

These circular and columnar sculptures often convey a distinctive atmospheric effect : Valentine enjoyed how, by dripping a small volume of ink or liquid color, it would remain almost magically suspended in space, refusing to dilute totally within the mass of liquid resin: Valentine loved these physical 'accidents' : he refers to them as his 'clouds.' Indeed, they have an eerie capacity to convey the effect of a cloud in a sky, or the effect of the smog on the atmosphere.

The particular forms of these sculptures are of particular note, as well : columns or prisms tend to be thicker at the bottom and thinner at the top, often resulting in something like a thin pyramidical structure. The case of circular sculptures is even more complex : the top is also thinner than the base, but the thinnest part is the center of these disks formed of a double concave circle – a signature form in Valentine's repertoire. Their color-scheme varies from dense tones at the thick parts to evanescent tonalities at the thinner areas; his chromatic palette tends to evoke mother-of-pearl, or a condensed summary of the rainbow range of colors. The paler the color is, the stronger the light refraction. Surfaces and color are translucent -- although it is easy to miss this particular attribute of Valentine's sculpture. As one stand, facing the surface of some of these sculptures, one can gaze through this translucent resin-based substance, as one becomes aware of the inner space and the space beyond it, as if our eyes could enter through and penetrate something that our physical body could never do. In Valentine’s own words: “I am fascinated by the idea of being aware of the outer surface of an object, of seeing through it and of seeing also the inner surface.” This statement also reflects the artist’s concerns with the viewer’s perception and the phenomenological possibilities triggered by his artworks. These awe-inspiring viewing experiences are heightened by the sculptures’ responsiveness to and activation of their environments. Valentine skillfully juxtaposes the literal objecthood with the illusionist effects of atmospheric light, solidified sky, and contained fluid color.

On view as well are examples of Valentine’s most recent paintings. Evoking a minimalist language permeated by sensuality, they are nonetheless illusionistic in their suggestion of a painted atmospheric surface and a glowing horizon line, made with acrylic polymer resin.

Valentine’s preoccupation with synthetic new materials and a wide range of visual and optical phenomena impacting the viewer’s perceptual experience places him within the long tradition of artists attempting to address the intangible qualities of atmosphere and light through the intersection of technique, science and art.

DeWain Valentine lives and works in Los Angeles, California. He has shown extensively with one-man exhibitions at institutions and galleries such as Ace Gallery, Los Angeles (1968; 2010); Galerie Bischoberger, Zürich (1969); Pasadena Art Museum, today Norton Simon Museum (1970); La Jolla Museum of Contemporary Art, California (1985); Los Angeles County Museum of Art (1979); and Honolulu Academy of Arts, Hawaii (1985). He has also been included in many noteworthy surveys, most recently Pacific Standard Time : Crosscurrents in LA Painting and Sculpture, 1950-1970 at Paul Getty Museum, Los Angeles (2011) and Martin-Gropius-Bau in Berlin (2012), West! Frank Gehry and the Artists of Venice Beach, 1962-1978 at the Frederick R. Weisman Art Museum, Minneapolis (2005), and the collective show Primary Atmospheres: Works from California 1960-1970 at David Zwirner, New York (2010). For his efforts as an artist, DeWain Valentine has been awarded both the John Simon Guggenheim Fellowship and the National Endowment for the Arts Grants.

On the occasion of the exhibition, Almine Rech will publish an illustrated catalogue with an essay by Art Historian and Author Joachim Pissarro.
www.galeriealminerech.com