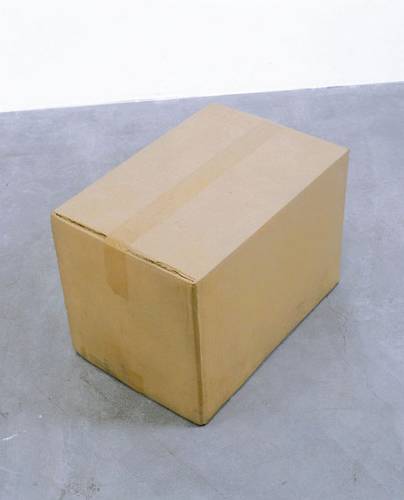 Gavin Turk was denied an MA certificate by the Royal College of Art in 1991.
For his degree show he hung a fake English Heritage blue plaque on the wall that read: "Borough of Kensington Gavin Turk Sculptor Worked Here 1989-1991", while his studio space remained conspicuously empty.

By beginning his career with its metaphoric completion - in effect memorialising it - Turk announced his artistic programme : a critique of authorship and the myth of "the artist" within the history of the European avant-garde.

In the early 1990s Turk made paintings based on his own signature:
self-reflexive comments on the value of an artist's name, as well as the authority of his own.
With Piero Manzoni (1992), Turk plagiarised the Italian artist's signature and then signed his own name to authenticate the work.
Stain (1992), a work consisting of Turk's signature on a strategically stained piece of paper, is a wry commentary on Giacometti's habit of signing the used tablecloth in lieu of payment for a restaurant meal. Here again Turk questions the signature as a mark of worth and authenticity..
In 1993 Turk exhibited his sculpture Pop at a hired space in London through dealer Jay Jopling for a show entitled "Collected Works 1989-1993". The piece is a life-size waxwork portrait in a vitrine of Gavin Turk as Sex Pistol Sid Vicious appropriating the posture of Warhol's painting of Elvis as an armed cowboy. As a continuation of Turk's self-memorialising plaque, Pop announces the metaphoric death of the artist and, by extension of the avant-garde through its parody of "the artist" as an embalmed pop icon.
Extrait d'un texte du critique anglais Bussel,
catalogue de l'exposition "Sensation", 1997.

Duchamp is the great artist of nihilism. For artists of Turk's generation, the great Duchamp icon is his urinal-as-art, entitled Fountain of 1917.
An object - something formerly banal and despised - becomes art merely because an artist says so. (...) Duchamp cast sugar cubes out of marble.
From art materials and ancient craft techniques, he made something that appeared to be mass-produced.
Later, in the 1950's, Jasper Johns created his own brand of ironic-aesthetic painting: irony had been a weapon against aestheticism for

Duchamp, but Johns made them compatible.
Fifty years later, with Turk the question of what is the valued object and what is the shadow is recast in terms of society's rejects: the homeless, the bin bag, cigarette butts, etc... (...) But then Turk's objects (...) are very literal. The transcending element is his ideas.