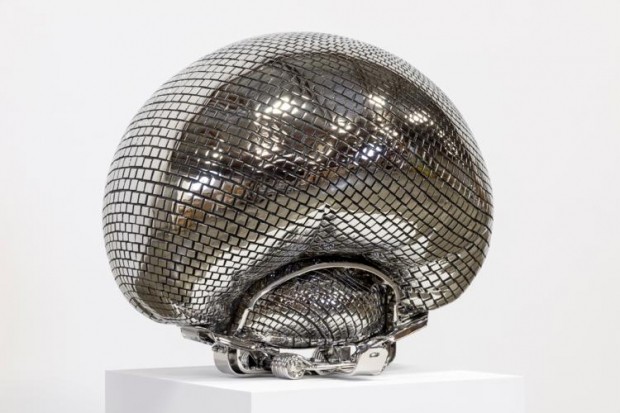 “A raw reality that remains supple by being lubricated or oiled with a kind of sarcasm.” – Franz West

Oscillating between high and low, minimalism and abstraction, order and chaos, Morrison reaches a global audience through undeniable craftsmanship while maintaining his subversive integrity. Found objects that are organic, tangential and seemingly arbitrary are enhanced into exalted roles. The stitched pattern on the blanket of New Madrid reveals the same pattern of a Frank Stella painting from 1961. A common French pastry is reoriented on a neoclassical bust as a croissant mustache bearing an unlikely parallel to Southern Californian Hispanic “cholo” culture.

Everyday objects like anvils, corncobs, studded jackets and tin foil are cast in various metals. Utilizing a medium that is often associated with monochromatic, cold and rigid aesthetics, the artist contradicts this initial interaction by enveloping the work in perfect, mirror polished surfaces. The viewer is immediately tethered to the work, with a personal interaction and intimacy. The colors from hair, clothes and other surrounding environmental elements are instantly absorbed. Though cast in a staunch and unyielding material, the work is constantly revitalized by its influx of viewers and surroundings.

The refined surfaces of the artworks allude to a team of specialized fabricators and technologically advanced machines creating the works, as opposed to the physically demanding, painstaking and analog process by which the artist’s hand is literally involved in every step of the process.

Born in 1976 in Seattle, Washington, Joel Morrison lives and works in Los Angeles, California. In recent years he has taken part in several exhibitions, including Six Solos at the Wexner Center for the Arts (Columbus, Ohio, 2011); the California Biennial at the Orange County Museum of Art (2006); and at the Gagosian Gallery (Hong Kong 2012, New York 2011, Beverly Hills 2008). His work was also shown in the Project Room of the Santa Monica Museum of Art in California in 2003.
www.galeriealminerech.com