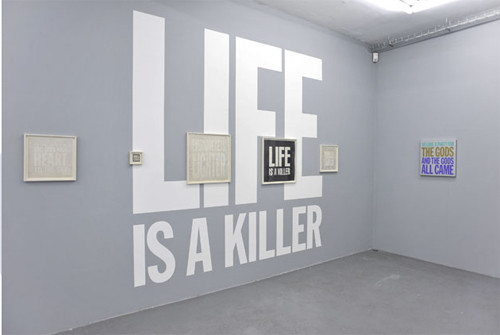 The American poet John Giorno, born in 1936 and recognised today as one of the most influential poets of his generation, was one of the instigators of the Beat Generation. He rapidly became close to William Burroughs, Allen Ginsberg and Andy Warhol, for whom he starred in the famous film, Sleep (1963).

For many years John Giorno has been taking words or expressions out of his poems and creating what he calls `ePoem Paintings”, using painting, drawing, and sometimes screen printing. Taken out of their literary context, the words are transposed on canvas or paper. Exhibiting his texts in this way confronts the poet with a new audience. He is trying to remove poetry from the elitist repertory to which it is too frequently confined.
Giorno has always striven to open poetry to an audience beyond the world of books. He is notably the inventor of Performance Poetryᾢlively, intense public readings, during which the spectator is questioned and captivated and an intense emotion is forged with the artist.

For his exhibition at the Galerie Almine Rech, John Giorno has chosen to present one year’s work : a set of 52 unpublished drawings, all made in 2008. John Giorno worked on the smaller drawings when he was touring around the world. A set of 18 ‘‘Welcoming The Flowers Paintings’’ will be also presented. The drawings and paintings will be installed on the gallery walls covered by several large poems made into stencils.
Two videos will also feature, Welcoming The Flowers and Down Comes The Rain, in which the performing poet directs his own performance.
www.galeriealminerech.com