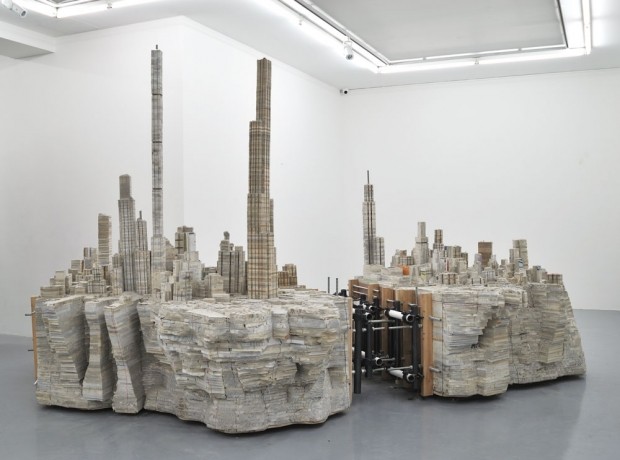 Almine Rech Gallery is pleased to present Foreign, the first solo exhibition by Liu Wei in Paris.
Born in Beijing in 1972, Liu Wei was the subject in 2011 of a solo exhibition entitled Trilogyat the Minsheng Art Museum of Shanghai, and in that same year he took part in the exhibition Liu Wei and Ai Weiwei at the Faurschou Foundation Beijing. In 2010 he was included in the Shanghai Biennale and contributed to DREAMLANDS, a show held at the Georges Pompidou Centre in Paris.
The installations, paintings and videos of Liu Wei, the artist spearheading the new Chinese art scene, constantly oscillate between order and disorder. Through his work, Liu Wei translates the chaos of his native city, a city that is in a permanent state of development and which keeps reinventing itself to fill the exponential needs of its hyper-productivity. Made out of schoolbooks, his at times sprawling installations waver between utopia and dystopia. They depict cities in a state of metamorphosis, home to a range of iconic buildings, from the Pentagon to Saint Peter’s Basilica, among others. Liu Wei refuses the ruling principle of an identifiable style and conventional aesthetic criteria. His work is an attempt to perpetuate the precepts of a country with a Confucian tradition, as can be seen in the series of paintingsPurple Air (2005-2011) and Meditation (2009-). At first sight, the works in Purple Airresemble a reflection on the typically Western notion of a univocal, horizontal landscape. Besides being a homage to Richter, the series conveys above all the fragmented vision of a polluted and gridded city, somewhere between a kaleidoscope, a TV test card and a bar code, a vision which brings to light more or less perceptible worlds. The paintings in the Meditationseries, on the other hand, revert to a horizontal vision of the world. Consisting of broad-brush strokes, these canvases, depicting both the break of day and night itself, reflect the growing distance between Liu Wei and an urban architecture that is both alienating and stimulating. Above all, these canvases evoke the notion of perspective in the pictorial field and the manner in which the artist positions himself in relation to his own artistic practice.
www.galeriealminerech.com