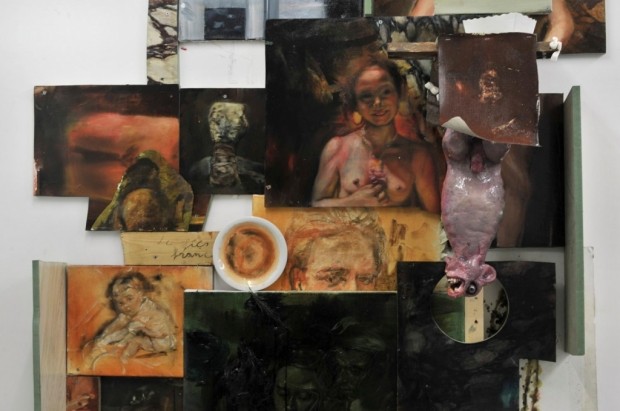 The Galerie Almine Rech is pleased to present the second solo exhibition in Paris, of Belgian artist, Matthieu Ronsse.

What first strikes the viewer about Matthieu Ronsse’s work is his remarkable mastery of the paintbrush and his almost casual method of selecting his materials and his artworks. Indeed, Ronsse’s technique is reminiscent of those Masters of classical painting such as Van Eyck, Rembrandt, Greco, Cranach, Velazquez, Renoir, etc. However, he doesn’t confine himself to classical materials and seeks to surpass any temporal or material limits.

His work is intuitive, spontaneous. The artworks hanging from the wall or placed on the floor of the exhibition spaces, housing one of the artist’s shows, rarely reflect the original subject matter. The layers capture the artist’s different states of mind, as well as spaces: his studio, his garden, the walls of a friend’s house, etc. Each oeuvre can be said to bear testimony to the time and attention to detail devoted to it by the artist, as well as the distress he has subjected them to: revising, cutting up, reworking, mixing, assembling, even tearing ... All are practices commonly used in Ronsse’s work. All of his works undergo change or transformation and are rendered obscure until the very last moment, leaning towards iconoclasm. They may even be read as a denial or rejection of perfection.

Matthieu Ronsse was born in 1981 in Courtai (Belgium). He lives and works in Mullem. His work has been the subject of several exhibitions in Belgium and abroad, notably at the SMAK (2003), the Museum Dhondt-Dhaenens (2006), the Marta Herford Museum (2006), Cultuurcentrum Mechelen (2007), MKM Museum Kuppersmühle (2008), Bonner Kunstverein (2010), MuZee (2010) and the Sint-Baafskathedraal Ghent (2012).
www.galeriealminerech.com