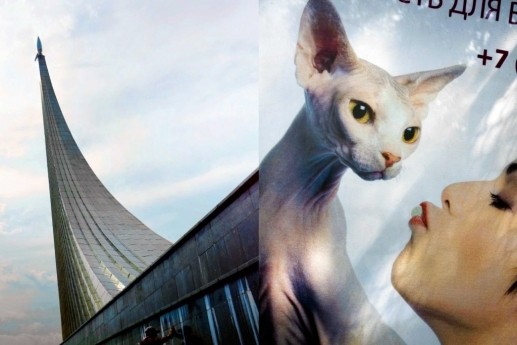 The house I live in, here in Moscow, is situated near the last metro station of the Red line, “Podbelskiy Street”. As I come out of the building, the first people I meet are the Tajik street sweepers. Municipal orange robes, locally sewn Adidas tracksuit pants and worn-out sneakers, they’re pushing around assorted junk in carts fabricated out of discarded baby strollers. This looks so comical that the first thing it brings to mind is the circus and its clowns with sad make up on their faces. In fifty meters, at the Metro entrance, the figure of a disheveled man with a crooked smile on his sideways-tilted head usually emerges and starts begging for change to buy a bottle or a metro ticket. Between the steps of the pharmacy and the “Podsolnukhi” (“Sunflowers”) market, lies the tightrope walkers’ zone.

People of less than sober appearance stumblingly balance on a rope stretched out in their heads. Further away, you can see the magicians – oriental merchants at the market. Having built their pyramids of vegetables and fruit, they conduct dazzling price manipulations from their summits. Trained animals – stray dogs of menacing proportions meditate in front of a store with a sign saying “Meat”. Over there, a man is dragging a metal bathtub on his back. Hard to see right away what that moving thing is. A ninja turtle perhaps? A woman in a green dress has bought five watermelons at once. She looks like a bunch of grapes. Someone’s gotten drunk early and now lays on the lawn, like a fallen trapeze artist smashed on the stage.

At the same time the internet is teeming with ads for upcoming shows:

Hellish Circus!!! Toy protest in Barnaul failed to be LEGOlized.

Save on circus tickets! – Politcs – Informational ...

Those who serve in the army, don’t laugh in the circus

The Political Circus is back! // KP.RU

Miller777 – Electoral district. The Circus – A view from inside the tent.

The Pre-Electoral circus: offenders go on record – The other side...

The circus is what everyone is talking about, but never knows when it will show up right outside your house. The main characteristic that distinguished theatrical activity from circus activity is the presence of meaning. Each movement in a theatrical performance is symbolic and filled with ideas, whereas in the circus the crowd gathers for the spectacle, which is closer to reality and therefore also riskier. In the circus, a real lion can eat its tamer, and an aerial acrobat swinging under the tent can always crash on the ground. But the most important thing in the circus is the expectation of a miracle.

Moscow is a city in which risk and magic are incredibly concentrated. Thousands of people come to the Russian capital each year in hope of a miracle. This city is a myth in which you can get fabulously rich, marry a princess and triumph over the two-headed dragon. A place where fairytale beauty and riches live next to infinite ugliness and poverty, and the two are so tightly knit together that the one can no longer exist without the other. Having decided to stick around along with its ring leader for the long term, the Moscow Circus brings two thoughts to mind. The first one is that when the public is no longer laughing but following the events in tense silence, it’s time to change the repertoire, as well as the ring leader. And the second, for the future, is when will the real miracle happen and make the circus go away?