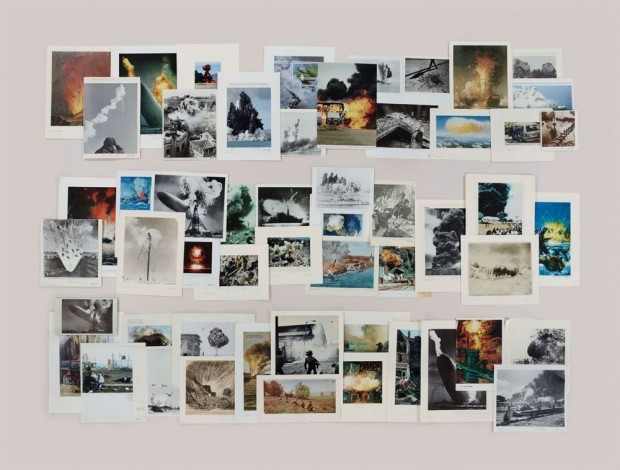 “It is human instinct to seek order and to find ways of making sense of the chaos that surrounds us. The Picture Collection reveals this ongoing impulse to categorize and set up ways of indexing, controlling, and understanding information which preceded the possibilities that technology allows. " —Taryn Simon

The Picture Collection comprises forty-nine works created from the New York Public Library’s picture archive, one of the august institution’s lesser-known troves. The archive contains 1.29 million prints, postcards, posters, and images carefully clipped from books and magazines. Organized by a complex cataloguing system of over 12,000 subject headings, it is the largest circulating picture library in the world.

Since its inception in 1915, the Picture Collection has been an important resource for writers, historians, artists, filmmakers, designers, and advertising agencies. Diego Rivera, who made use of it for his Rockefeller Center mural, Man at the Crossroads (1934), noted that the scope of this image archive might go on to shape contemporary visions of America—suggesting that today’s “accidents” might be the basis for tomorrow’s collective understanding. Andy Warhol was also a frequent user of the collection, with a particular interest in advertising images—many of which were never returned.

The Picture Collection’s content and categories follow a crude algorithm, reactive to the happenstance of image donations over time, the interests of librarians, and the specific requests of library users. The collection serves as a space where images that are historically inscribed and validated exist beside those that are not. This flattening of hierarchies positions generic advertising pictures next to photographs by Weegee or Steichen, and a Rauschenberg reproduction next to a travel postcard or an anonymous artist’s work.

In The Picture Collection, Taryn Simon highlights the impulse to archive and organize visual information, and points to the invisible hands behind seemingly neutral systems of image gathering. Simon sees this extensive archive of images as a precursor to Internet search engines. Such an unlikely futurity in the past is at the core of the Picture Collection. The digital is foreshadowed in the analog, at the same time that history—its classifications, its contents—seems the stuff of projection.

On view will also be a selection from Simon’s Black Square (2006-2013). In this series, Simon photographs disorienting subjects, each highlighting a specific cultural complexity, collapse or ambiguity within the exact frame size as Kazimir Malevich's 1915 Suprematist masterpiece. Malevich’s Black Square—an elemental black square painted on canvas with a white border--represented both an end and a beginning in art history, an attempt to create a new mode of visual representation devoid of overt social or political meaning, yet devastating in its implications for the painted image. In this contemporary homage, Simon embraces Malevich’s pure aesthetic intentions and profound impact on the history of art and visual communication, but pushes his initiatives forward onto contemporary ground. As in previous series by the artist (A Living Man Declared Dead and Other Chapters I- XVIII, 2011; Contraband, 2010), the focal point in Black Square is often found in the gap that lies between image and caption.

Taryn Simon was born in 1975. Her artistic medium consists of three equal elements: photography, text, and graphic design. Her works investigate the impossibility of absolute understanding and open up the space between text and image, where disorientation occurs and ambiguity reigns. Simon’s works have been the subject of monographic exhibitions at institutions including Museum of Modern Art, New York (2012), Tate Modern, London (2011); Neue Nationalgalerie, Berlin (2011); Whitney Museum of American Art, New York (2007. Permanent collections include the Metropolitan Museum of Art, Tate Modern, Whitney Museum, Centre Pompidou, and the Los Angeles Museum of Contemporary Art. In 2011 her work was included in the 54th Venice Biennale. She lives and works in New York.
www.galeriealminerech.com