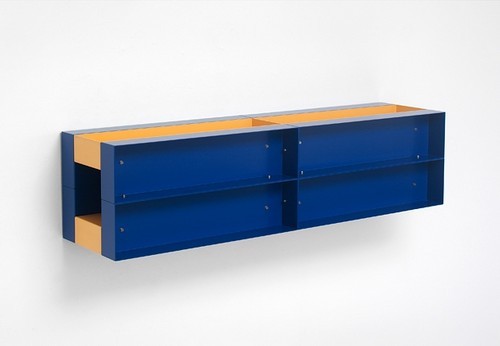 The exhibition Wall & Floor seeks to highlight the links one can establish between some of the key figures in minimalism and a young generation of artists whose claims, though sometimes quite distinct, owe much to the considerations of their elders.

If Brancusi and Duchamp considerably broadened sculpture's field of research, Carl Andre, Donald Judd, Sol Lewitt and John McCracken, as well as Chris Burden, Dan Graham, Frank Stella and James Turrell have pushed back art's theoretical and aesthetic boundaries by eschewing the centuries-old distinction between painting and sculpture: in the past, depending on whether they were two- or three-dimensional, paintings and sculptures were either hung on the wall or placed on the floor...

By rejecting this rigid framework, which had already been challenged by the avant-gardes of the early twentieth century, these young artists have gained considerable freedom.

Their new-found freedom can be seen in both their claims and in their ability to engage in meaningful dialogue with the works of their elders.

One can hardly miss the connection between, for instance, a piece by John McCracken and a sculpture by Aaron Young or Anselm Reyle... Not only do their works present formal analogies, but they sometimes also share comparable intentions.

Like their elders, this young generation of artists – which includes Tom Burr, Koenraad Dedobbeleer, Thomas Kiesewetter, Nate Lowman, Andrei Molodkin and Katja Strunz – can playfully engage with and reinterpret art-historical forms. This is the case, even though post-modernism has quite distinct claims and aims to break free from a certain formal rigour and thus to enable greater freedom and greater eclecticism in the use of materials.

This exhibition will give visitors the opportunity to discover recent works and rare pieces, including a historical painting on paper by Donald Judd (1971) and a large 2005 gouache painting by Sol Lewitt.