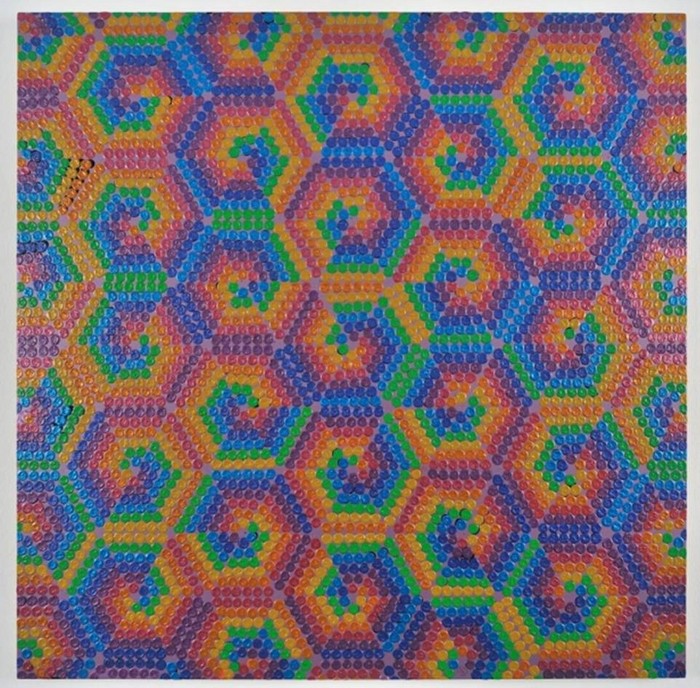 Almine rech Gallery is pleased to announce an exhibition by Massachusetts based painter Xylor Jane. Mathematics and the grid are at use by Ms. Jane to mark the passage of time in bold color and complicated rhythms. An overt investment in pattern drives the artist's paintings to a place where they fall from comprehension, and return to a visual tapestry of the absurd and sublime. Any notion that the idea creates the art is put to rest by the sheer madness of the machine. Unlike process artists like Sol Lewitt, the recipes at play in Ms Jane's work are for one cook only. The paintings remind one of the infinite project of Roman Opalka and the date works of On Kawara. The gridded paintings of Agnes Martin's softly patterned and colorfully hazy abstract vistas are also an apt comparison. The personal musings of the artist translate into veils of refined color stemming from a slightly manic preoccupation with measurement, symbolism and notation. For the viewer, wobbly and atmospheric patterns are both disconcerting and reassuring to gaze upon, because we are also part of Xylor Jane's vast vision of the world.

Luke Murphy on the paintings of Xylor Jane :
« In the current vernacular, one might call Xylor Jane’s work a mash-up of Alfred Jensen’s exploration of ancient numbers and patterns and the calendar systems mapped by Agnes Martin’s exquisite line and almost intolerable sensitivity. But we would need to add to that confluence the particular type of rigor Jane applies to her work in which her painting structures are predetermined by complex counting instructions the artist imposes upon herself. Every color, line, and dot is in place because of deliberate execution of those rules. And even while rigor may describe the manifest structure of these paintings, it does not fully encompass the way or why these painting are formed. They are neither exclusive explorations of mathematics and time systems nor are they only personal and hermetic figuration.

These paintings have sources in that they are made up from series of significant cultural and personal dates in Jane’s lifetime and they reflect the painter’s fascination with accounts of near death experiences: the fast flash of the past, the soft glowing light, the altering effect and the intimacy of the moment. These things are woven in to her system of numbers, texture, color and pattern, a system that has as much to do with a structure of numbers as it has to do with sustaining the self of the artist. This is not hyperbole. For Xylor Jane, numbers are more than just substrates from which she conjures gentle or strident patterns, they are her collaborators and vital effluence. How else could works of apparent mathematical origin evoke such things as humor and vulnerability or obsession and love?

Most of us looking at these paintings cannot hold the layering of prime number sequences, numerical palindromes and strict rules of coloration in our minds all at once. What we do see however, is the absolute and uncanny necessity of those systems to both the work and to Jane. This is what gives them their internal coherence. What we get from these paintings and what so holds our attention is the deep sense of reassurance that comes from that coherence. »

"Crisscross" is a group of recent oil paintings from the Via Crucis series I began Spring 2009. The series is based on the 14 Stations of the Cross. Numbers 2, 5, 11 and 13 deal with The Cross specifically: bearing the cross; cruxifiction, and being deposed from it.

In 2002, I saw Barnett Newman's Stations of the Cross paintings at the Philadelphia Museum of Art and decided to pursue my own. These four paintings are the latest to come out of my studio. They complete the series of 14. » - Xylor Jane
www.galeriealminerech.com