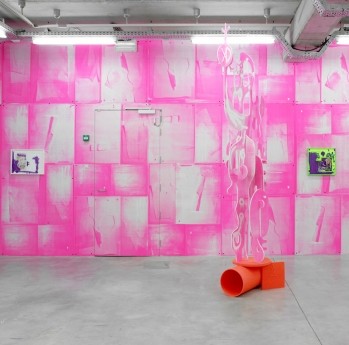 Interview with Aaron Curry through skype on May 23rd 2012. Julie Boukobza

How did you approach your first show at the Brussels's gallery?

I went to visit the gallery a few months ago, and simply started by making sketches in response to the space. My last few shows were based on a loose idea of abstraction using different forms of camouflage, with patterns that had been created using a computer. I covered the rooms and sculptures with the same pattern so that the forms would disappear at different angles, and change as you walked around them. With this show I decided to use what was already there, which is the white walls. The main gallery consist of all white sculptures and wall pieces.

In this exhibition, it seems that you decided to make a clear distinction between the handmade and fabricated artwork?

There is a difference but it’s not as big as it seems. The works were produced from maquettes that I had quickly made by hand with a jigsaw, almost like sketches. They were then scanned, blown up and produced in metal. What happens when you do this is the gesture that I make using the saw gets amplified. Something that is maybe six inches becomes six feet. I think of it more like an amplification of the handmade. The original gesture is mediated but it still feels extremely physical and even more intensified. It’s like plugging a guitar into an amplifier to make it louder. These works function in the same way to me.

It is often said about your work that you jump easily from one dimension to another, the line between two and three dimension seems blurry, how can you explain this phenomenon?

I started out as a painter, and when I first started making sculptures they were pretty much just clunky paintings that were falling off the walls. The more they spilled into the space, I realized that I liked the awkwardness of them, that the space they existed in was somewhere in between two and three dimensions. It’s a bit open ended in a way. I wasn’t brought up around art so my understanding of painting and sculpture came from books. And because I learned to look at art from a flat plane in a book, an album cover, or even a computer screen, I’ve always enjoyed the awkwardness of it as an illusion. I like to try and find in my work this space in between the two. I guess I’m always trying to get my paintings to come out into the space three dimensionally while also trying to get my sculptures to do the opposite, to flatten into the walls around them.

Do you think that digital and / or analog values are consciously part of your practice?

I don’t know, analog make me think of music because I used to be a musician and I understand the difference in that way. As far as making artworks, I don’t know how to apply analog to it. If you think about analog in music terms, say if you record something, there is always a relation to time. It can be something on a loop, or something always moving forward. It can be cut or spliced but it usually takes time and feels kind of crude. With digital you can cut and paste much faster and easier. It’s in its nature, which is really interesting to me. I think I’m probably nostalgic for an analog idea of things, because that’s what I grew up around, it is more natural to me because of this, but digital is much more exciting!

What about your approach in the making?

Even when I’m making a physical sculpture, I use this approach. I have two studios. One is a wood shop where I work on my sculptures and the other a painting studio at home. I often take photos of my sculpture in process so that I can come home and use my computer to digitally draw on top of the image using a drawing tablet to make adjustments. It gives me a certain amount of freedom to think about things and also move very quickly with them. And the next day I can return to my woodshop and make those cuts, if that makes sense. I love this idea of even looking at you now on the computer and that there are other programs and windows open behind the skype window. This is very much like a cubist idea of space, where if I put or pull another image on top of this or that program, the screen or window changes. You can mash it up that way with hundreds of images at one time.


Your sculptures always seem in motion - from Giacometti " Walking Man" to Calder's " Devil Fish"- standing on dollies or not, as if they were ready to go somewhere, but where?

I like that sculptures usually just sit there, and when you approach them and walk around, they change. You give it movement through your interaction. And I like to give them a sense of movement, or the feeling that it is about to move, or can be moved. It’s equally interesting as balance, for example, if you make a sculpture that looks like it’s about to fall over using balance, it gives it this implied movement, through weight and form.

Is "California versus Texas" a component of your work and a way to understand it?

I just did a show with Richard Hawkins, a fellow Texan and good friend of mine in Los Angeles at David Kordansky Gallery. That show was heavily influenced by Texas or more the imagery and idea of what Texas looks like from the outside. I don’t think we could have made that show working in Texas, it had to be done in Los Angeles looking back. But it’s true that even today when I look at Noguchi or David Smith I automatically make reference to something from my past that was cobbled together outside of some hillbilly shack somewhere. Whether it was a tire sculpture in my neighbors yard, or a prop from the TV show Hee-Haw.

In which state of mind do you approach collages?

It’s kind of an in between place. They are usually create in a moment where I take a break from other things whether it’s sculpture or painting, and allow myself the freedom to not think, or actually to think visually. It’s somehow like a commercial break on television where you tune out in between the show. It’s hard to explain. I like that I don’t need to make sure it physically stands up like a sculpture, so there isn’t any real physical interaction other than moving images around. And the great thing about this part of my practice is that I can make a hundred collages and throw them out at the end of the day if I feel that they don’t work. That’s a lot of freedom.
www.alminerech.com