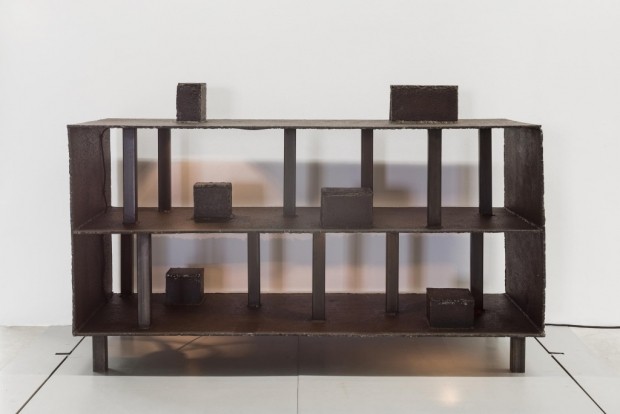 What happens when a work of art also presents a functional purpose, when a sculpture serves as a piece of furniture, when a picture is painted, not on canvas, but on a curtain or carpet?

This exhibition puts into perspective the way in which many artists eschew categories and question the porous boundary that is meant to separate fine art from the decorative arts by reintroducing the notion of domesticity in their reflection.

These works – often considered as belonging in the margins of artistic practice – reveal other stakes, however. The most obvious of these consists in attributing to the object a function that goes beyond beauty or content.

This interest in the dialogue between form and function is present throughout history. It was revived in the late nineteenth century by the Arts and Crafts movement of William

Morris and John Ruskin, and some years later by Art Nouveau, which gave shape to this ideal of ‘beautiful and useful’ creations. This same objective was put forward in the 1920s and 1930s by avant-garde movements like Bauhaus and De Stijl, before once more losing in importance. Throughout the twentieth century, the question of the closeness or distance between fine art and the decorative arts has been hotly debated, just as, for that matter, the potential ‘decorative’ virtues of the work of art. For their part, designers stress this possible permeability between furniture and sculpture by creating pieces whose functionality vanishes behind form, and/or by increasingly producing limited series, and sometimes even unique pieces.

Today the presumed barrier between what allegedly falls under art and what has long been considered a minor art is gradually fading away. This change in perspective has been brought about by artists that have rekindled the dialogue between form and function by introducing in their practice materials that are generally used in the creation of domestic objects or craftwork. Thus, ceramic, wool, textile, glass and recycled materials, among others, are now an integral part of the contemporary language of the visual arts.

These materials induce techniques and gestures that have long been reserved for artistic craftwork or for the painstaking creations of women (from the myth of Penelope waiting for the return of Ulysses to the needlework of nuns behind convent walls or to knitting and embroidery, considered as feminine pastimes). This return to manual ‘fabrication’, this involvement in the practice of a craft requiring time and attention seems to steer the choice of some artists. Far from being regressive, this attitude can be seen as a response to the production of spectacular works whose technical perfection and sophistication erase any trace of manual intervention and discourage any form of emotion. More modest in appearance, these productions tolerate potential imperfections, irregularities, flaws that not only define their singularity, but also express a certain poetry and a proximity to those who contemplate them or make use of them. Moreover, these ‘functional’ pieces sometimes raise questions in relation to the body. The viewer-turned-user is invited to touch, move, sit on and experiment the object, while appreciating it for what it is, i.e., a work of art (whether it is a unique piece or is produced in a limited series).

At times the object created by the artist will generate a certain confusion born of the blurring of codes, notably when the artist confronts a pre-existing functional artefact with his own work. The same uncertainty occurs when paint is applied to a support other than a canvas, such as a carpet or a tapestry. These practices are as much evocative of the hybrid forms that painting can take as of the way in which we look at works that escape easy categorization.

In its diversity, the exhibition offers a contemporary outlook on creation in the broadest sense of the term. It also plays freely with the idea of a domestic installation that has more to do with the apartment of an amateur than the white cube that is the gallery.