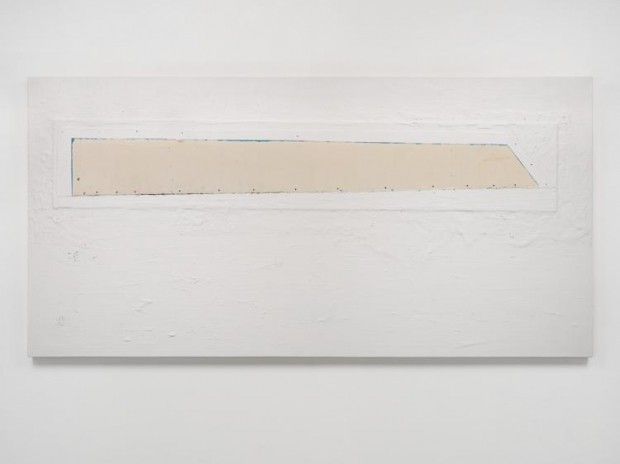 For his first solo exhibition at Almine Rech Gallery in Brussels, Erik Lindman created six large scale works, one medium work and a selection of five smaller paintings which correlate between the two spaces he conceived for the venue.

The deliberately minimal hanging of the pieces, forces the spectator to concentrate on how they have adapted to the imposing volume of the gallery space. Whilst his previous works were largely made of found objects, sometimes barely modified, this new series is a return to painting and abstraction. The paintings are made of several elements which create a frame for a central component. This component is autonomous or may have been taken from another painting which didn’t work as intened. Nicolas Trembley interviewed the artist in his new Brooklyn studio in November 2013, while he was finalizing his work for the exhibition.

Nicolas Trembley : Can you talk to us about the exhibition you have conceived for Brussels?

Erik Lindman: I work on my paintings for a long time, and I can never tell exactly when they will come together. I don't decide beforehand to make a certain number of paintings, or a certain size of paintings, for an exhibition. I just start working and see how the paintings begin to relate to one another. This week, for example, I finished a painting that completely changed my idea for a large portion of the show at Almine Rech in Bruxelles.

NT : Can you explain the process behind the creation of these new paintings?

EL : I work exclusively on the paintings in a horizontal position, on saw horses. The walls of my studio are used primarily for looking at paintings once they're finished, and I keep them up for as long as I can. I like to live with them as I work on new paintings. This way I can pick up on certain operations within the painting. Presented in an upright position, they occupy perspectival space, the space of the mind’s eye.

NT : You have always worked with found objects and so-called “poor” or simple materials, Why is that?

EL: From trying to be as direct as possible. If I find something that articulates what I’m thinking about, I use it. I don’t go out and search for material. The surfaces are things I come across in my day-to-day activities, and usually this involves a lot of editing. I’m most excited when paintings I’ve began in the studio get worked upon and edited to such an extent that they themselves have the quality of being “found.” As I don’t make that many paintings, there’s always a pile of just three or four surfaces stacked in my studio waiting to find their place in a painting. At the time that I started being open to incorporating found material, I was reading Simone Weil’s writing. I loved the idea of beauty being most clearly accessed through lack of personality. These found surfaces seemed like a direct path to anonymity.

NT : How many paintings will you include in the exhibition?

EL : There are five large vertical paintings and one large horizontal work that will anchor the show. The vertical paintings are eight-by-five feet. The horizontal painting has the same area, but in a skewed ratio in order to accommodate its orientation, so it's four-by-nine feet. These paintings directly relate to human scale. The surfaces I find are ones that I can carry, so they represent my body. Though they are sometimes mass-produced—industrial design designating the best possible size of a surface. This logic is why I tend to work on similarly sized paintings. There is a logic to the scale of things that attracts me, that relates to the overall framing dimension of the canvas. The large paintings are not simply larger versions of the smaller works. And each painting within this logic of scale operates differently.

NT : Can these new paintings be considered as a series?

EL: I don’t think in terms of series, but the logic of different scales could be seen in parallel to the idea of a series. Series is a marketing term. I do make scale models of the gallery and print out images of the paintings to better visualize the exhibition. With this show, I’m insisting on giving each painting enough room, and I think there are just enough paintings to hold the space, which is quite large. So many shows today have too much work in them. I want the show to feel quiet but full.

NT : What makes a successfully hung show for you?

EL : For me, a successfully hung show is one that you don’t have to think about as a viewer. It should feel completely natural. A show shouldn’t make the installation a part of the artwork. I’m not a fan of hanging paintings in strange ways, or not hanging anything at all.

NT : Do you consider yourself a painter?

EL: Yes, I do consider myself a painter! Its hard to say you are an “artist who makes paintings,” at least with a straight face. I’m not interested in over-thinking labels of any kind. What I do is make paintings. Modifying this label is ultimately a self-conscious marketing term. To say you are a “Conceptual Painter” just means you think you are a smarter than other painters, or smarter than you actually are.

NT : What do you generally think of painting today?

EL : I have no idea how my paintings will be received in the future, but I’m very excited about how my paintings are going today! Embracing the traditional aspects of painting is the way for the work to supersede trends, and open it up to a much larger and more powerful discourse. This loser, slacker, defeatist posturing you see in painting now doesn’t interest me. I don’t relate to doodles, garbage, personal history, stains, industrial manufacturing, or heavy-handed—and derivative!—automatism. A lot of painting I see today is lazy and too cool for me. It has a false idea of humility. To quote a friend, “Everyone is in love with their dirty dishrags!”

NT : Do you not also ponder the question of the end of painting, in that it is incapable of being more than it was?

EL : My work embraces failure in a positive way. I’m interested in a complex simplicity. To be humble is to be right sized—not too big and not to small. It’s not apologizing for existing and it’s not imposing on others. I’m interested in tradition. I surrender to win while working, but I don’t want painting to be defeated. Why bother to spend your life painting if you just want to undercut it?

NT : To have gotten where you are today, where have you come from and what did you study?

EL: To the surprise of most, I am a born-and-bred New Yorker–the unlikely outcome of a studious mother from Coney Island, Brooklyn and my father, an intimidatingly handsome Swede. I grew up on the Upper East Side of Manhattan, where I drunkenly gazed at art displayed in rich people’s apartments until I shuffled crosstown to Columbia University for college at eighteen, where I studied painting and art history.

NT : How have your family and social environments influenced you?

EL: My father started designing display windows for his hometown department store as a teenager, and eventually opened his own advertising firm in New York. I learned much of what I know from observing him at a distance. Completely self-taught, my father has a very strong sense of how things should look. I’ve always appreciated—but more accurately, feared—his impeccable taste, and super-human ability to do things himself. My father has worked on all the houses, cameras, and cars that he’s owned himself—a real do-it-yourselfer from necessity and self-will.

EL : Nothing was beige or adorned in our very clean, white apartment, full of modified Ikea furniture. Growing up, we were neither rich nor poor. Lacking a set social standing, I found that being able to talk about art gave me an identity in the privileged setting of the Upper East Side. While this attitude was clearly misguided, my genuine enthusiasm for art eventually won out.

NT : What did you study at Columbia?

EL : I had wonderful teachers—the artists Blake Rayne and Gregory Amenoff—who independently presented a detached, theoretical approach to painting, as well as a heart-on-your-sleeve sentiment: “how you cook your eggs is how you make your paintings." Navigating these two positions proved tricky but very productive!

NT : Which artists inspired you at the time?

EL: In high school, I found a copy of a biography about Basquiat. His work opened up contemporary art for me, as well as added fuel to my ill-advised preoccupation with art-as-persona. At Columbia, Basquiat was replaced by Kippenberger – a more “sophisticated” idea of persona! ­– and by artists who were painting in a qualified way, such as Michael Krebber, Merlin Carpenter, and Charline von Heyl. And I listened a lot to the band Suicide. After school, as I started to transition into making my own work, Blinky Palermo and Raoul De Keyser became important.

NT : And today, who are your artistic references?

I don’t look at too much contemporary art. I like Ellsworth Kelly. I talk with and look at my friends’ work—Wyatt Kahn, Zak Kitnick and Ryan Foerster. But instead of going to galleries, I’d rather get lost at the Met. I once worked there as a “sales associate” in the gift shop. I like religious art, Icon painting, textile design and ceramics.

NT : Who is it that you are addressing? Who is your public? You wrote a collection of essays on painting, entitled “On Painting”, why?

EL: I can count the people I’m directly talking to on my fingers and toes! My art is more about my relationship with reality than a statement to an audience. When I wrote the essay you're referring to in 2011, I didn’t intend to be cryptic. I wanted to be as clear as I could in describing how I felt about painting at the time. But painting is a complicated enterprise. Leaving the complexity apparent—this most clearly articulates the essence of what I intended to communicate. Ultimately, the idea for writing the essay was not for the sake of writing, but for the sake of making better paintings. The central thesis of this essay is fairly unoriginal—I believe painting stays relevant by not trying to keep up with the times. Painting does this by rejecting novelty.

NT : What would you like to see change in art or the art world?

EL: I would like to change quite a lot. I would love to see the end of the State. I’ve never appreciated bullies and thieves. I don’t like didactic art. I gave up trying to manipulate and control situations. Perhaps this happens in microcosm in my studio. Although I make paintings for myself, anyone is welcome to experience the sense of concentrated quiet I feel at the completion of painting.
www.alminerech.com