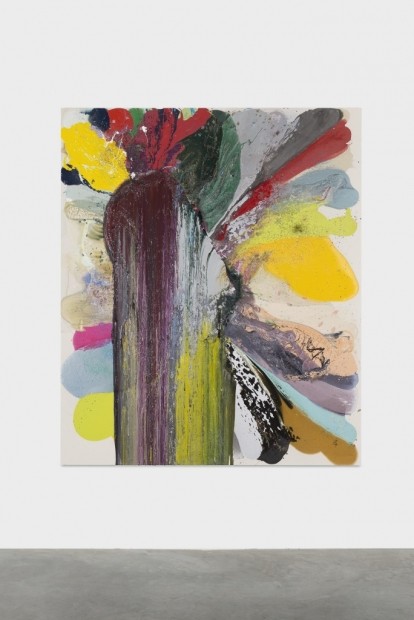 Under the title « La bruche du haricot », John M. Armleder presents a new production of his famous Puddle Painting series, where the layering process follows the one used for the Pour Paintings; it consists in pouring a vast quantity of various materials and other inappropriate chemical substances over the surface of large canvases that are laid flat; which eventually oxidize, affecting the painting in an un-hoped for and unpredictable manner.

As with all Armleder’s production, these paintings born from his admiration for Larry Poons do not hide the strategy of their fabrication nor the importance of their own process: a time liberated from formal constraints, moral obligations, and the conventions of taste and style. The canvasses are thus flooded with an excess of paint that stagnates, warps, has trouble drying, creating a liquid bubble in its center. All sorts of elements are then projected on it, which by their sheer numbers increase the potential for transformation. Finally the paintings are raised vertically, the still-liquid center next flowing randomly, giving them “this Abstract Expressionist aspect” according to Armleder, “even though there is no effort at expression from my part”.

The artist’s virtuosity in shopping up in all the aisles, tinkering with reality, hasn’t ceased to grow along his impressing production rate that a messy listing of his ingredients would suffice to name. These large canvases evoking strange terrestrial crusts or cosmic constellations are above all the wonderful result of an impossible and catastrophic mixture between some quick-drying, water-based, two-part epoxy, two-part cellulosic polyurethane synthetic enamel; some acrylic dispersion, a fungicide soaking, a translucent wood stain, a protective glaze, some synthetic varnishes, some Zapon for boats, anti-UV polyurethane paint, some aluminum paint, some interfering, iridescent porcelain paint, some chrome spray paint, some silicon-based mineral paint, some metallic acrylic paint, some floor paint, some airbrush paint, some paint for silk, for stained glass, with a hammered finish, a transparent acrylic primer, a marble-effect spray, some gilt, some golden, luminescent painting pigments, a siccative, some glitter and glitter powder, some Christmas decorations, some Halloween decorations, some plastic toys, some hardware, some accessories for model-making, some wire, a pipe-cleaner, some DIY-materials, some pasta, some chocolate, some costume jewelry, cotton fibers, some iridescent medium, some ink, a crushed tire, some fake blood, some table decorations, some pompoms, some sugar decorations, some nail polish, some tar, and some synthetic and rock crystals.

As for the weevil, nothing at this stage can help us decide whether the insect plays any role in this operation of devastation, unless we consider the irreversible damages it already incurs on beans, making then definitively unfit for human consumption; its larval stage leaving some amazing pre-cut circular lids on the surface of the seed. And if the insignificant and patient operating mechanics [technique] of the weevil may have been cause for John M. Armleder’s admiration, let’s avoid as far as possible the analogy or the vain temptation to use an animal, agricultural metaphor. As it turns out, the weevil was already here, a pure signifier already available within an infinite, various catalog of forms and words awaiting figuration.

Like Genesis P-Orridge, John M. Armleder has known for a long time that everything is already there, that the creative activity is a shady place for a kidnapping, a suspicious mode of captation. From this ambivalent and paradoxical world, between Warhol’s nonchalant contempt and the “beauty of indifference” postulated by Duchamp, his project joins these two 20th century figures operation of sabotage; the sabotaging of the concept of a singular, original and authentic author. But he does it in a different way, against his own will, outside any program, without disaffection or coldness.

Armleder doesn’t believe in the distinct value of art anymore than he does believe in his own production. It’s the position of a healthy miscreant, which he shares with Monsieur Aa and Picabia rather than with the majority of his contemporaries. For he has for almost fifty years built a body of works outside established systems, starting from contradictory, messy hypotheses based on a method liberated from art’s hierarchies and categories. Against any authority, the work of this artist who is as influential as he is atypical borrows equally from the grand narratives of artistic movements (Constructivism, abstraction, Pop Art, Op Art, Minimalism, Conceptual Art...) and from cultural fringes. It’s a way of making art as you would go shopping, of looking with the same curious attention at the elements and signs that dress up our existences. Whether he’s appropriating objects belonging to museum culture, or to surf culture, B-movies, Zen philosophy, tea ceremonies, Hawaiian folklore, or to Christmas popular rituals, what is important isn’t these objects’ sources but their duplication, their displacement inside another space that is a priori unfit for hosting them.

Since his first happenings with the Ecart group (a distant emanation from Fluxus) in the 1960s, through the scope of his pictorial works or the totality of his Furniture Sculptures, between his monumental devices, his light works, his production of multiples or his works on paper, but also through his activity as a curator or publisher, nothing makes it possible to organize the totality of these objects retrospectively today, by using periodicities, diagrams, or any other evolutionary logic. Nothing but the continuing relationship with the world and with life, which sees in these accumulation and disruption games this only evidence: art would only be this, the indecipherable result of various looting and tinkering operations, of a random sampling, cloning and deleting mechanics.

John M. Armleder’s work is thus inscribed within the core of a common contradiction: the artist may have done everything in his power to stay at a (critical, esthetic, ethical) distance from his favorite objects-subjects, yet he is irremediably compromised by them. To the point of accepting the risks of being contaminated by the values deemed negatives his art manipulates, by weakness, by a vacuum, by bankruptcy. This conversion device isn’t new but sometimes aims for vertigo in Armleder’s work, for whom the incorporation and salvaging process is always a place for joyful dispossession, for a throw-in of everything and nothing but most especially anything.