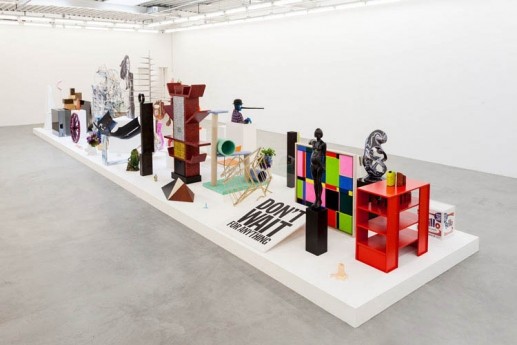 Platform is the title of the summer exhibition at the Almine Rech Gallery in Brussels.

The show mainly brings together the artists represented by the gallery, but works by guest artists are also included as well as some design objects. The exhibition follows Telephone Paintings, a show that was created for the Art Basel stand in 2012 and which presented only ‘paintings’. Although the works that make up Platform are very diverse, this time the display consists exclusively of ‘sculptures’.

The red thread running through Telephone Paintings was wallpaper specially designed for the show and which served as a backdrop for the works. For Platform, the red thread is the pedestal on which the various pieces rest. Conceived like a huge white podium measuring 17 metres and filling the exhibition space from one end to the other, this platform, similar to a catwalk, stages and gathers all these works in the round, i.e., three-dimensional objects that the public can view from any angle, even framed photographs and drawings.

Besides highlighting the three-dimensional aspect of the pieces, Platform also establishes a dialogue between the notions of design and contemporary art, objects of consumption, mass culture and subjects of contemplation. Although industrial design generally serves a utilitarian purpose, some artists have used it as a source of inspiration for their work and appropriate it through various strategies: Jeff Koons and his famous vacuum cleaners, John Armleder and his ‘furniture sculptures’, or Franz West and his sculptures that also serve as pieces of furniture. By contrast, William O’Brien’s ceramic vases are purely artistic objects, just as Sylvie Fleury’s bronze Chanel shoes and bag, which are impossible to use.

For their part, designers like Martino Gamper, Ettore Sottsass and Oscar Niemeyer have produced shelves and tables that can be displayed like sculptures. Many artists present in Platform were inspired by utilitarian objects to alter their status. Placed at the entrance to the gallery, the shelf by Haim Steinbach is symbolic of the questions raised in this exhibition, i.e., what is an art object and what is the place of the object in art. Among the works featured in the show are Andy Warhol’s Brillo boxes, Tom Burr’s radiator, Aaron Young’s barriers, Anselm Reyle’s wagon wheel, Gavin Turk’s aluminium foil box, Gregor Hildebrandt’s jukebox, and Ugo Rondinone’s bronze sculptures, perfect reproductions of used wax candles.

Throughout the summer, Platform will play with and question the reciprocal movements between sculpture and objects, commercial and cultural spaces, art and shopping, high and low culture.