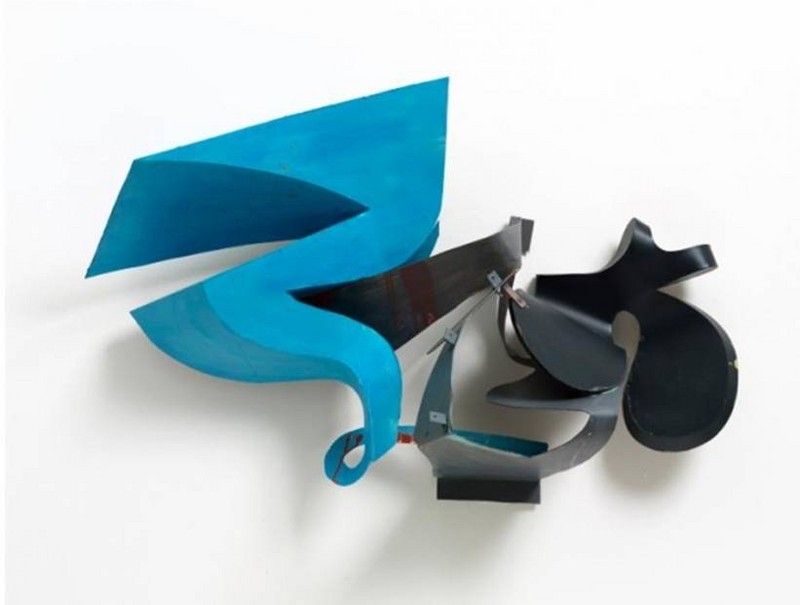 Put into orbit in the immaculate white sky of the Almine Rech Gallery in Brussels, Thomas Kiesewetter’s wall sculptures draw us into another dimension of his universe. His new constellation regroups a set of sculptures presented in the vertical vaults of the gallery. And if the sculptures of Thomas Kiesewetter suggest optical disorientation, it is because they have transformed the surface of the wall into their own flat surface. The exhibition ‘Midnight Sky’ lights up eight sculpted stars– Mars, Earth, Jupiter, Venus, Neptune, Mercury, Saturn and Uranus. In the artist view, his new metal structures question the very nature and meaning of the sculptural tradition since they no longer belong to the same space as the viewer “you can look at them but they seem to be somewhere else like planets in the sky”.

The Kassel-born artist draws his inspiration from the register of the modernists and constructivists as well as in the post-war sculpture that took a new turn in the wake of minimalism and American art. Having so far proposed a 360-degree view ofhis creations, the sculptor has decided to leave behind the three-dimensional sphere to spread himself out on the gallery’s vertical exhibition walls. Like suspended drawings, these geometric, anthropomorphic and coloured metal aggregates gravitate in the white cube. Paradoxically, while the ‘painting’ frees itself from the wall, the sculpture longs to become a visual work. “One views the wall sculptures like a painting, one cannot get around it, one can only face it”, observes the artist.

Thomas Kiesewetter has chosen to abandon the silence of the monochrome in favour of an interaction of forms and colours whose chromatic range is reminiscent of the approach followed by the modernist masters. Surfaces are casually brushed and sprayed with colourful paint picking up the flow of the sculptural form. His sculpting technique alternates between the precision found in the handling of the forms on the one hand, and broad brush strokes on the other. His metal workshop in Berlin is where the sculptor rethinks his art in relation to painting, thereby proposing a perfectly frontal perspective of the ‘sculptural image’.