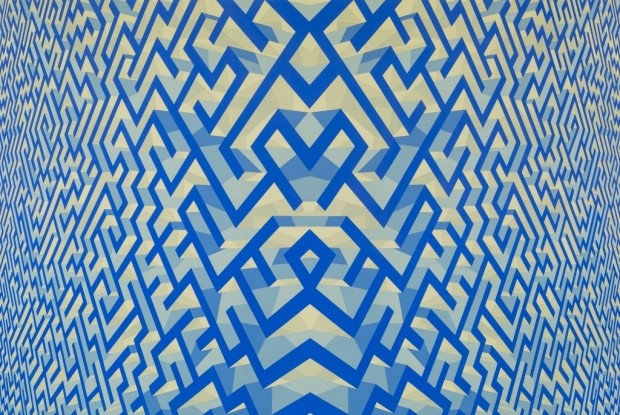 Known for his original multiform approach, Xu Qu is one of the most interesting creative talents from the new generation of young Chinese artists who grew up in the 1980s and who are beginning to appear on the national and international scenes.

For over several years, Xu Qu has been exploring a wide range of mediums, such as videos, paintings, sculptures and installations that are questioning the reality of our global world.

Born in 1978 in the city of Nanjing, West of Shanghai, Xu Qu studied at the Nanjing Art Institute and the Braunschweig University of Art in Germany, where he attended the postgraduate course taught by the artist John Armleder in 2008. Back in China, he has developed an eclectic and richly varied work that displays an obsession with attraction for power relations.

His first solo exhibition in Europe at Almine Rech Gallery focuses on two iconic series of recent works that are both parts of a vast ongoing project.

In the Currency Wars series, Xu Qu uses different watermarks of banknotes from across the world to create colourful abstract compositions. The resulting artwork is therefore functioning both as a cultural and financial vehicle, reflecting how the artwork often becomes a commodity.

With this huge body of work, the artist suggests a monetary system that is out of control and raises questions specific to the idea of power in our contemporary world, and how far its continuous mutation can go. With stakes of a simultaneously oversized, abstract, and absurd nature, this ongoing series talks about the global economy war with currencies from around the globe and how emerging countries have reversed the value of their currency and have changed the global face of the economy. Some may disappear while others reappear with importance and force.

For the first time, the Currency Wars paintings are shown here back to back on movable stands, simulating the circulating property of those currencies.

The Maze series is the continuity of the Currency Wars: these paintings show infinite mazes that are a complex with many paths of different choices and directions. These nearby-realistic images are like reflections of the world and the information process. Unlike our elders, the new generation of Chinese and their foreign counterparts have benefitted from the massive growth of technology and access to information as well as an opening up as a global culture through immediate, unlimited access to the internet. Xu Qu’s work deals with this era of massive and public information, as well as the social networks that cannot differentiate between matters of importance and trivialities.

In this sense, Xu Qu’s paintings take up the conceptual characteristic of plural investi- gations, revealing an artistic approach that is minimal, non-figurative, dematerialized and globalized.