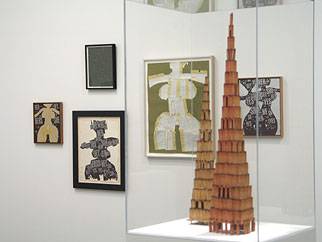 We are very pleased to extend our exhibit of an extraordinary selection of Al Hansen's work. Geared to expose the evolution of his practice from 1962 - 1995, the exhibition concentrates on work from the 1960's but also includes an in-depth range extending to works completed just before his passing in 1995.

A seminal Happenings performer, involved with the Fluxus and Pop movements, Hansen is at once vital to the fabric of the past and of particular relevance to the present. This exhibition embodies the goal of Gallery 2 to support historical work that offers exciting parallels to current interest and reinforces a basis of historical knowledge for the audience. We consider the current excitement around performance and process based art to be fresh, but as this younger generation emerges it is interesting to understand its relationship to the movements that Hansen was of, starting as Neo-Dadaism, then morphing into Happenings, Performance Art, and Fluxus.

From the very beginning, Hansen's art, life, and community of peers were inseparably intertwined. In 1957 Hansen enrolled in John Cage's composition class at The New School. He had no prior knowledge of music, but this class became a catalyst for a community of artists performing and sharing ideas. His first exhibition was at the Ruben Gallery, New York in 1959 - a group show that included Robert Rauschenberg, Claes Oldenburg, Jim Dine and Allan Kaprow. Collaborations and solo ventures resulted in short films and performances that were improvisational in feeling but actually very formal and rehearsed. They were regularly presented at venues such as Judson Church's Hall of Issues, Pratt Institute, and later at the Third Rail Gallery of Current Art which Hansen founded in Brooklyn.

Due to the mostly ephemeral nature of their work, it can be difficult to trace the impact of many critical artists from the 1960's who were engaged in Happenings and Performance, who are historically important because of their contributions to culture and way of thinking. Whereas few of these artists were actually interested in making lasting objects, Hansen had a strong and parallel practice that was process based yet resulted in tangible objects. Hansen's body of discrete works offers a direct opportunity to experience his influence and contribution. The primary focus of the exhibition will be on the complex and appealing objects that he made. Additionally, in an effort to engage the dialogue between his performative and non-performative work we will host an evening: "Al Hansen Performance" on April 24th. This special presentation organized by Bibbe Hansen, will include videos and recreations of performances. Hansen's grandson, Channing Hansen, will be on hand to perform Elegy for Fluxus Dead.

This exhibition explores two main aspects of Hansen's work. The first is an in-depth focus of his range and use of collage. Most typically using cut or torn Hershey bar wrappers, his relationship with Neo-Dadaism and Fluxus is explored through language and preexisting materials. The earliest Hershey collages such as Yes He She, ca 1962, Holiday in Mexico, 1963, and Cool Motel, ca 1966 reference Abstract Expressionism through his method of tearing apart the wrappers. Within a few years, he began to cut the wrappers enabling him to produce the finely wrought and distinct Pop art format.

The second subject explored is Hansen's fascination with the Venus. Even in his early non-figurative pieces, references to women appear through the words included, she, her, clit, hers. This lifelong obsession soon becomes full-blown. Miss Stuff, 1967, Calliope Venus, 1968, Bambolina, 1994, Venus of Shop-Ritedorff, 1965, A T & T Venus, 1993 – Venus, Goddess, Mother, Lover... This long and continued relationship is fleshed out in many different forms and mediums including wrappers, cigarette butts, cigarette papers, matchsticks, and newspaper clippings.

Additionally included are works that probe further into Hansen's focus, from matchstick sculptures to poetry. In such pieces as Intermedia Poem (Unarmed Man Shot), 1993, Hansen expands his interest in language in the form of poems pieced together from newspaper headlines.

Necessity, in some cases, influenced Hansen's decision to explore new media. When he moved to Los Angeles in the late 1970's his supply of Hershey bar wrappers ran short so he turned to cigarette butts and matchsticks as more readily available materials. He would reportedly walk through restaurants before sitting down for a meal to gather spent matches and cigarettes from the ashtrays. Or on occasion, he took his young grandsons on gathering expeditions through the streets of LA.

The happening, no matter how much it is rehearsed, is still a curious and unique form of theater in that one puts its parts together in the manner of making a collage. The things in a collage - a piece of linoleum, a fruit can wrapper, a cigar butt, a comb wedged into a thick slat of white paint - might be worked in initially to fit with the things around them, but in the finished piece, any or several of these items might be covered over with black paint and have something imbedded in them. The same process seems to apply to the happening.

Al Hansen was open to influence by others while also being at the core his movement. In researching this exhibition it has been wonderful to find just how many artists Hansen was friendly with, from Andy Warhol to the Kipper Kids, and hear of works in the collections of artists such as Roy Lichtenstein, Robert Rauschenberg, and Claes Oldenburg. Throughout his life, Hansen was committed to encouraging and supporting the work of other artists through activities such as the Ultimate Akademie, an informal school inspired by Joseph Beuys's Free University-which was predicated on the idea that everyone is an artist-that he founded in 1987. Despite his associations with various movements, artists, and media, Hansen was singularly dedicated to expressing the art-life continuum through works that are at once playful and serious. Through examples of Hansen's overlapping and constantly growing focus the exhibition aims to address the fullness of his practice.
- - -
In recent years interest in Hansen has steadily increased. His work has been in group exhibitions at the Shanghai Art Museum, the Tate Gallery, London; and the MAK Center, Vienna. Posthumous retrospectives have taken place at Cologne Stadtmuseum and Kunstverein Rosenheim. In addition, he was the subject of the touring exhibition "Playing With Matches," which featured his work alongside that of his grandson, musician Beck, and toured throughout North America, Germany, and Japan.

Born in New York City in 1927, Hansen served in the Army of Occupation in Germany before returning to New York. His classes with John Cage provided the foundation for his Fluxus event scores, including The Hamlet of Gertrude Stein (1962) and Alice Denham in 48 Seconds (1958), as well as later Happenings such as Yoko Ono Piano Drop (1970), which calls for a "prepared" Piano to be pushed off the roof of a gallery or museum, and Elegy for the Fluxus Dead (1987), in which the artist wrapped his entire head in masking tape after reciting the names of deceased fellow Fluxus artists. Hansen was also a regular fixture at Andy Warhol's Factory, an experience that inspired the Happening Why Shoot Andy Warhol? (1986). In the 1970s, Hansen lived in Los Angeles where he became involved in the local punk scene, together with his daughter Bibbe Hansen. In 1980, he moved to Cologne, where he lived and worked until his death in 1995.

This exhibition is in collaboration with Gracie Mansion Fine Art and in cooperation with the Estate of Al Hansen. We are very grateful for their support.
For images please contact Jeremy Lawson at j.lawson@rosengallery.com or 212-627-6000