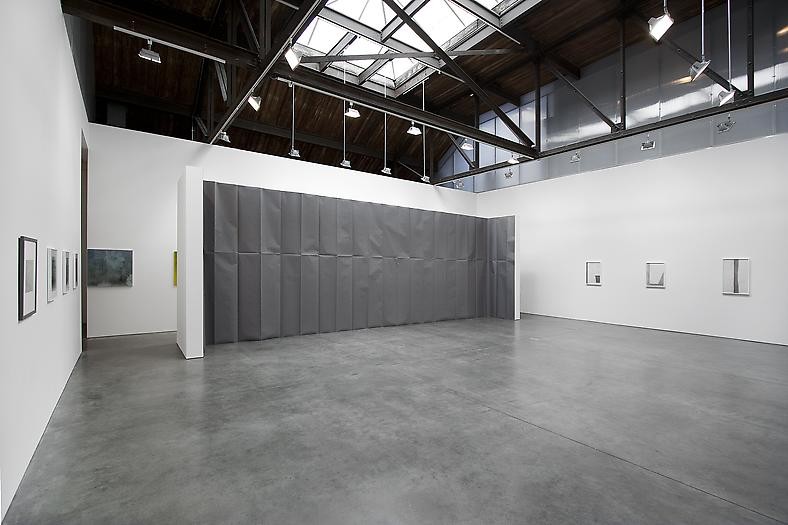 Andrea Rosen Gallery is thrilled to announce Back Grounds: Impressions Photographiques (2), a historically rooted exhibition organized with Olivier Renaud-Clément that traces a profound lineage of conceptual, process-based photography. Ranging from early experimentations of the early 19th century in France to our contemporary era, this exhibition juxtaposes pioneering historical legacies with divergent contemporary trajectories, as a means of building a contextual foundation for the experience and re-experience of such work. The resulting orchestration is an intimately curated dialogue between artists Liz Deschenes, Martin d’Orgeval, Gaylen Gerber, Chargesheimer, Sherrie Levine, Baron Adolphe Humbert de Molard, Alfred Stieglitz, and James Welling, which traverses between realms of methodology and intention, and channels attention to the processes of looking.

Built from the foundation of five early paper negatives by Baron Adolphe Humbert de Molard (b. 1800), first exhibited as part of a three-person show originally presented ten years ago at Andrew Kreps Gallery, New York and Galerie Nelson, Paris, this expanded exhibition further investigates a premise that expounds the ways in which our perception of such work, historically bound to context and experience, has shifted over time, and continues to generate a discursivity and evaluation of content. “One thing to remember,” states Renaud, “is that in the earliest stages of the medium, the practitioners were not necessarily artists per se or even photographers, but curious experimentalists and chemists who had yet to realize the potential of a new medium that had barely come to life. Today, somehow, in our digital age, it seems we have come full circle and are re-addressing this with the lessons and facts of history.”

Beginning in the 1800s, at a time when photography was inherently experimental, such venture into abstraction, as present in de Molard’s fragile, golden images of William the Conqueror’s Normandy Castle, was an unusual attempt. Attracted to the chemical medium, de Molard experimented with alternative fixing baths and chemical processes, producing what may be perceived definably as both artifacts of a developing technique and the artworks of an amateur pioneer.

Alfred Stieglitz’s significant body of work Equivalents (1925-1934), shifts our gaze to consume both expansive and claustrophobic images of the sky, of dissipating and cumulating clouds, provoking, as Stieglitz described, an awareness of the awesome infinity beyond our existence. In an act to re-place historical content before contemporary audiences, Sherrie Levine’s reprisal of iconic imagery, such as Stieglitz’s Equivalents, provokes questions of authorship, originality, and artistic lineage, and encourages work to be experienced anew.

The natural abstractions of Martin d’Orgeval’s wall photographs, developing a specific idea of frame, space and relief through a concern for metaphysical interiority, address subtle and complex issues of perspective. By interacting with the photographed shadows in the image, the real cast shadows of the salient frame create a coalescence of figurative and real spaces, activating the symbolic tension between materiality and immateriality.

Renaud-Clément’s presentations of Gaylen Gerber’s work in this exhibition foreground its more relative qualities. Renaud-Clément presents Gerber’s “contextual” Backdrop, which normally is a ground to the whole exhibition, as an object itself sited on a constructed partition. He also presents a series of “discrete” photographic works in a way that underscores their contextual reading. This unusual reprise uses two bodies of work that take different forms but address similar concerns, drawing attention to the permeability of the distinction between the contextual and the discrete and suggests that everything in the exhibition may be considered both background and subject.

Working to expand the dialogue surrounding photography, Liz Deschenes extends unique viewing experiences that explore the self-reflexive concepts of the medium. As one of the three artists who comprised Renaud’s first exhibition in 2002, Deschenes has presented significant and distinct bodies of new work with each incarnation: Blue Screen Process (2002), Black and White (2003), and for this exhibition, a new body of works that stem from the photographs recently exhibited in Bracket (London) at Campoli Presti.

Olivier Renaud-Clément dedicates this exhibition to Philip Nelson, with whom he organized the first exhibition in Paris in 2002.

Liz Deschenes was born in 1966 in Boston, Massachusetts. Her work will be the subject of a solo exhibition at the Walker Art Center in October 2014. Recent exhibitions include Secession, Vienna; National Gallery of Denmark; and Fotomuseum Winterthur, Switzerland. Her work is in the permanent collections of Centre George Pompidou, Paris; MoMA, New York; Whitney Museum of American Art; The Metropolitan Museum of Art; The Walker Art Center; and the Art Institute of Chicago, among others. Deschenes lives and works in New York.

Baron Adolphe Humbert de Molard (1800–1874) was born in Paris, France. He took up photography in 1843 using the daguerreotype, and later in the mid 1850s, became one of the first French photographers to use the calotype, a technique on paper developed in England by Fox Talbot, and introducing the principle of positive and negative.

Sherrie Levine was born in 1947 in Hazleton, Pennsylvania. Solo exhibitions of her work have been organized by San Francisco Museum of Modern Art; Philadelphia Museum of Art; Portikus, Frankfurt; Museum of Contemporary Art, Los Angeles; Kunstverein, Hamburg; The Getty Research Institute, Los Angeles; and Hirshhorn Museum, Washington, D.C., among others. Her work has been represented at Documenta 7, the Whitney Biennial, Sydney Biennial, Carnegie International, and São Paulo Bienal. Levine lives and works in New York and Santa Fe.

Alfred Stieglitz (1864–1946) was born in Hoboken, New Jersey. As photographer, critic, dealer and theorist, Stieglitz had a decisive influence on the development of modern art in America during the early 20th century. His photographs are in the permanent collections of the National Gallery of Art, Washington, D.C.; the Metropolitan Museum of Art; MoMA, New York; Philadelphia Museum of Art; and Art Institute of Chicago, among others.