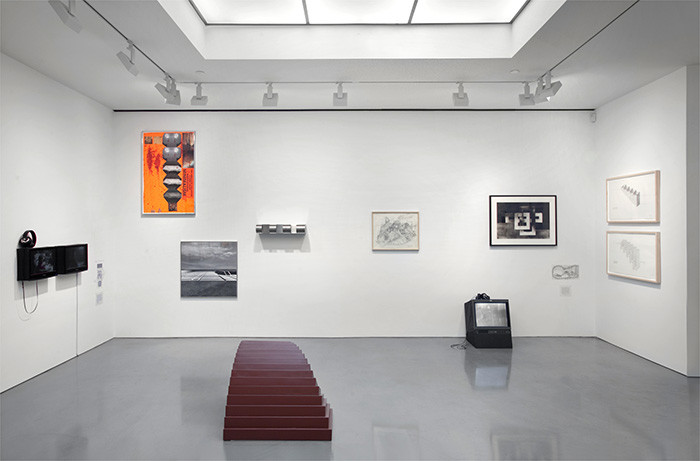 Andrea Rosen Gallery is delighted to announce Cellblock I and Cellblock II, two group exhibitions – both curated by Robert Hobbs –that are intertwined yet distinctly separate in their intention. The exhibitions open November 3, 2012 at the Gallery's main space at 525 West 24th Street, as well as inaugurating its new, second location, at 544 West 24th Street.

Cellblock I, at the Gallery's primary and expanded space (525 West 24th Street), brings together a compelling group of four important artists – Peter Halley, Robert Motherwell, Sterling Ruby and Kelley Walker – by presenting a selection of significant paintings. The complex ideas behind the show and Hobbs' very deliberate choice of work suggest further layers of reading while remaining open to the viewers' own abstracted relationships with the works and their unique experiences. As is characteristic of shows at the Gallery, Cellblock I affords the opportunity to look at these familiar artists in a new way and with more depth, both in relation to each other and in regards to their individual practices.

While these are four artists Hobbs has championed individually, it's compelling how this show and subject bring together his scholarship in a culminating and unexpected way with artists whom he has known, studied, and written about over the length of his career, forming a meeting point of sorts.

The Gallery is especially thrilled to feature Cellblock II: An Essay in Exhibition Form as the first show at its second space, which will newly house its Gallery 2 program, known for content-driven, experimental and historical one time exhibitions. Andrea Rosen conceived Gallery 2 in 1999 as a liberating arena in which to consider new ideas and create parallel perspectives to the Gallery's primary program, and as a means of fulfilling the Gallery's responsibility to broaden visual references and education for its audience. Cellblock II is a perfect first show for the new location as its basis is a key principle of Gallery 2 – combining works and/or artists one might know, including historical artists as well as those of a younger generation, to create unexpected relationships and significant dialogues around a subject that has not been explored in such depth. The Gallery 2 program also provides the opportunity to work with esteemed independent curators and art historians, and the Gallery is extremely proud to spotlight this profound brainchild of Robert Hobbs, the prominent scholar and curator known for his extensive, in-depth, historically important writings on Robert Motherwell and a plethora of other artists, and also known as the definitive Robert Smithson scholar.

While the show brings together work that addresses containment, enclosure, and imprisonment, it also questions the frequently unexamined assumption that modern and contemporary art's contents are eminently assessable to viewers either empirically or epistemologically by finding the right key, so that almost by magic an open sesame takes place. Countering this myth of art's ease of access, these shows look at the power of refusal, both formally and in terms of subject matter, when works of art deliberately withhold their contents so that viewers are left with enduring mysteries and disquieting conundrums. A text by Hobbs, describing the deeper intellectual content of Cellblock I and II, is also included for reference.

The foundational concept of Cellblock is very purposefully presented as two distinct shows, representing two completely different yet complementary perspectives. The physical separation of Cellblock I and Cellblock II clarifies their different orientations.

Art historian Dr. Robert Hobbs has held the Rhoda Thalhimer Endowed Chair at Virginia Commonwealth University since 1991 and has been a visiting professor at Yale University for eight years. Before joining VCU, he served as a lecturer at Yale and an associate professor at Cornell University. Recognized as a scholar, teacher, and curator, Hobbs specializes in both late modern and postmodern art. His work joins social history with literary criticism and aesthetics; it also relies on feminist and postcolonial theory. He has published widely and curated dozens of exhibitions, many of which have been shown at important institutions in the U.S. and abroad such as the Brooklyn Museum of Art; the Drawing Center (NYC); the Los Angeles County Museum of Art; Musée d'Art Moderne de la Ville de Paris; and the Whitney Museum of American Art. His specific research areas span the twentieth- and twentieth-first centuries, and his publications include monographs on Milton Avery, Alice Aycock, Edward Hopper, Lee Krasner, Mark Lombardi, Sterling Ruby, Robert Smithson, and Kara Walker. In addition he has written on such mainstream modern and postmodern artists as Hernan Bas, Duane Hanson, Keith Haring, Jonathan Lasker, Mark Lindquist, Malcolm Morley, Robert Motherwell, Beverly Pepper, Richard Pousette-Dart, Neo Rauch, Andres Serrano, Yinka Shonibare, James Siena, Tony Smith, Meredyth Sparks, Frank Stella, Frank Thiel, Kelley Walker, John Wesley, and Kehinde Wiley, among others.

Robert Hobbs will co-curate the Bahamian Pavilion for the forthcoming Venice Biennale in 2013, with an exhibition of works by Tavares Strachan. This follows his appointment in 1982 as the U.S. Commissioner/Curator for the Venice Biennale for his exhibition "Robert Smithson: Sculpture," which had previously been shown at the Whitney Museum of American Art, and his appointment in 2002 as Curator for the São Paulo Biennial for the exhibition "Kara Walker: Slavery! Slavery!"

In his 1897 "Preface" to "Un coup de dés" ("A Throw of Dice"), French nineteenth-century Symbolist Stéphane Mallarmé clarifies how "spaced-out blanks" of white paper function in his poem. "The paper," he explains, "intervenes each time an image, of its own accord, ceases or withdraws." This contrapuntal movement between the poem's material components (typeface on sheets of paper) and ostensible subject matter (a shipwreck and chance) can be extended to the visual arts, so that a similar ongoing and oscillating shift between means and meaning can be seen as taking place. Art's media can be understood as both blocking and revealing its import by participating in an accordion-like action of alternating revelation and obduracy. The work of art, in other words, incarnates and incarcerates an idea in distinct materials while contradictorily and momentarily springing the release of these media from their confines, permitting them alternatively to be read as signs and symbols as well as to be seen for themselves, thus briefly obviating a given work's metaphysical references. This reversibility of views—a flickering oscillation between subject and object—can readily be demonstrated by pointing out how the art's material support can participate fully in its dynamics so that figure and form are mutually supportive.

The two-part exhibition Cellblock I and II—named for a division of a prison, a large building divided into separate units, a death house, a digital component, and biological cells working in tandem—intends to update this Mallarméan approach by looking at a selected group of works, many familiar to the curator through his past research, in order to demonstrate how artistic media can function bi-stably in the two different registers of revealing and obfuscating. Often, they paradoxically reveal themselves and their contents through the self-reflexive recalcitrance of the artistic materials comprising them. Dating from the mid-twentieth century to the present, these works figuratively re-present their constituent materials' obstinacy in terms of such coercive topics as incarceration, boundaries, foundations, and limits, in addition to various other obstructions. These works of art do so even when their ostensible subjects are biological cells as well as the cell-like circuitry of digital media. The artistic media making up the art in this exhibition, then, is intended to dramatize the shifting and ongoing reversible presence and absence of the figurative and formal elements comprising these works.

Cellblock is organized into parts I and II, taking place in two separate locations on 24th Street. The first section is a spare hanging of works, setting up a series of similarities and differences in relation to the cellblock theme, while the second takes place in the Gallery's new space at 544 West 24th Street. Cellblock II fleshes out this theme by presenting a far greater range of cellblock types, illuminated with diagrams, quotes, and commentaries, with the full knowledge that any such showing can only be representative, never inclusive.

Beginning in the 1960s, the work of art as a restricted cell has served as a working premise for many artists, who have found ways to literalize this closure in a number of empathic ways. Several generative metaphors have enabled them to think about art's contradictory ability to communicate certain of its contents while also withholding information by maintaining its status as an enduring conundrum, so that viewers are left focusing on the work itself rather than any particular communiqué it might appear to be revealing. Among the most productive metaphors are Plato's cave, which supports the view of art as constituting at best a shadowy world; the black box, which focuses on art's irresolvable secrets; and Jeremy Bentham's panopticon, which emphasizes embodied perception and perspectival viewing. A more recent model is provided by the supermax prison, an American invention, with its enforcement of permanent solitary confinement, a concept crucial for Sterling Ruby's work. Although this exhibition focuses on the ways certain works of art function, Duchamp's inscribed portrait by Marvin Lazarus testifies to the artist's retrospective as a type of detention, an overarching restriction based on the misguided concept that all of an individual artist's work can be categorized in terms of a single stylistic designation.