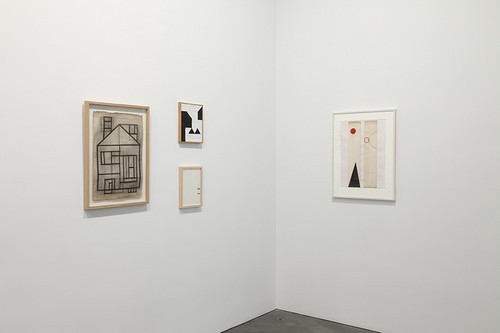 Spanning nearly 100 years, the works in this exhibition offer insight into the shape of our culture and the movements of inspiration-moments in time radically altering the course of history and the present forever constructing the past. Constructivismes - (A visual essay) originated with a specific interest in the rare geometric drawings of Russian Supremacist Kazimir Malevich from 1914 through 1917. Malevich was an activist for a new visual environment to bring about a change in perception. His revolutionary style left an indelible impact on the future of art. Following Malevich the artists of the Constructivist movement were early pioneers of applying new technologies to art making and the development of an industrial and angular visual language.
Each work in this exhibition, in relationship to Malevich's drawings, will illustrate how remarkably influential the motifs of these two movements have been and continue to be. This exhibition brings together a compelling constellation of works that share an underlying purpose, whether that is social, process oriented or the representation of a formal language.
Akira Kanayama is best known as a key member of Gutai Bijutsu Kyokai (Gutai Art Association), based in Osaka, Japan, in the late 1950s. Kanayama's minimalist works pay conscious attention to the edges of the picture. His conceptual practice and participation in the avant-garde group exemplify the Constructivist model. Lesser known American artist Burgoyne Diller began exploring constructed and architectural forms in his unique drawings and collages from the 1960s, which were later to transform into painting and sculptures. Throughout her long practice, the veteran American photographer Barbara Kasten 'documented' her own ephemeral constructions and assemblage. Her early black and white photograms from the late 1970s are examples of this process which she then retouched with color.
The most recent works in the exhibition are from two German artists known primarily as sculptors, Katja Strunz and Matthias Bitzer. In a series of letterpress prints, Strunz has collaged aged paper, which purposefully creates an ambiguous origination date, into geometric forms. Bitzer deconstructs figures and then using formal language an image is reconstructed to the edge of abstraction. We are delighted to continue our ongoing focus of exploring dialogues between historical artists and the current generation.
www.andrearosengallery.com