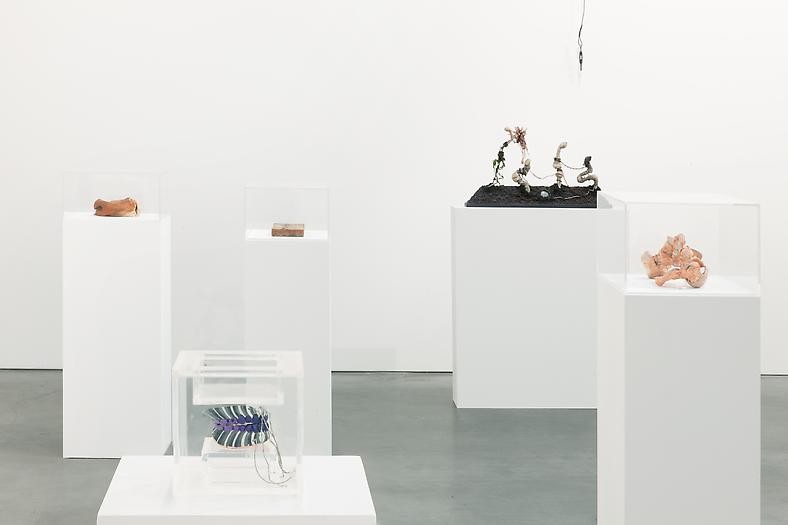 Counter Forms brings together an extraordinary group of rarely seen works, predominantly from the 1960s and ‘70s, by four artists whose oeuvres remains as fresh and visceral today as they must have first appeared in their time. The exhibition gathers an unprecedented constellation of artists and exceptional historical material, provoking us to look at the innovation and continuing relevance of each artist anew while also highlighting the unexpected resonance of their oeuvres. Involving many loans from institutional and private collections, archives and artists’ estates, Counter Forms continues the gallery’s commitment to featuring influential historical artists whose full significance is growing both in the United States and internationally.

During their lives, each cut too short, Tetsumi Kudo (1935-1990), Alina Szapocznikow (1926-1973), Paul Thek (1933-1988) and Hannah Wilke (1940-1993) likely never met or learned of the others’ practices. Yet in the 1960s and ‘70s they were almost simultaneously developing an art that was at once raw and sexualized, acerbic and resolutely human. Their immediate contexts were different, but whether grappling with the implications of post-war America, post-Holocaust Poland, or post-Hiroshima Japan, their works seem haunted—materially and actually—by their makers’ willing exploration of disaster and disintegration in a way that was quite at odds with the clean, optimistic and perfected forms that more widely circulated in their epoch.

Theirs was an art of bodily traces: repeatedly, obstinately, Kudo, Szapocznikow, Thek and Wilke made forms that were by turns gangly and awkward or strangely elegant, and often involving body casting or references to the body through material agglutinations of new and experimental materials of their day, including latex, resin, and poured polyurethane. The results were resolutely handmade with a charged immediacy and an aesthetic and conceptual volatility to them that far outweighed their often diminutive, human scale. Penises float in resin or sprout from buckets, delicate folds of terracotta conjure orifices both inviting and dangerous, while latex lips, butts, noses, and chins offer themselves as curious indexical traces of real bodies, figuratively dismembered. As biting as they are unexpectedly humorous, they were provocations to much sculpture being made at the time.

Intractable, unsettling, one could call them “counter forms”: decidedly not formalist exercises and yet not totally amorphous either—forms they are. In their embodied intimacy and sexual candor and in their anti-heroic stance, they offered their own uncanny riposte to the commercial imagery of Pop art, the pure geometry or industrial facture of so much Minimalism and the dry, immaterial practices of Conceptual art. Kudo, Szapocznikow, Thek and Wilke’s works spoke of the flipside of their contemporary moment’s lust for idealized commodity objects and, with it, any naively optimistic view of reality or its sexual politics. They dared to make an art so questioning that it would allow its maker “to doubt everything completely” as Kudo once wrote; an art that was imperfect, built from “awkward objects,” as Szapocznikow called hers; or, in Wilke’s words “an art close to laughter, making love, [or] shaking hands,” and which brought, as Thek explained, “the raw human fleshy characteristics back to the art” against the period’s “enormous tendency toward the minimal, the non-emotional, the anti-emotional even.”

Built around some of the shared vocabulary of these four artists, the exhibition purposefully includes rarely seen examples of Kudo’s signature cubes, buckets, gardens and cages lined with readymade objects and body cast elements that sit and protrude on stems like planted chrysanthemums; a selection of Szapocznikow’s seemingly volcanic, molten polyurethane forms, some of which were first and last shown in the late 1960s, as well as a number of examples of her penchant for body casting; a spectacular ensemble of Thek’s “Technological Reliquaries” or, “meat pieces,” wax made to resemble glistening pieces of raw flesh housed in Plexiglas cases, as well as other rarely seen of his cast works; and an extraordinary ensemble of Hannah Wilke’s early gaping, orificial forms, wrought from terracotta, ceramic, latex, bronze, or chewing gum, some never exhibited before. Their primarily sculptural practices are accented here by select examples of paintings or works on paper.

Counter Forms pays homage to a group of artists who were pushing the boundaries of what was happening in their time—formally, materially, technically, conceptually—while also sitting at the center of the critical discourse of their era. Representing their countries at the Venice Biennale, staging critically acclaimed exhibitions, receiving prestigious grants, and garnering respect from amongst their artist-colleagues, their visceral work struck a chord at the moment it was first being made and shown and then, inexplicably, slipped from many of the official narratives of the epoch. Recent reassessments have begun to importantly shift their place. Alongside such large-scale exhibitions as the 2008 Tetsumi Kudo retrospective at the Walker Art Center and forthcoming Osaka retrospective; the 2011 Alina Szapocznikow retrospective at WIELS Contemporary Art Center in Brussels, the Museum of Modern Art, the Wexner Center for the Arts, and the Hammer Museum, the large-scale drawing show at the Center Pompidou in Paris, and forthcoming monographic show at the Tel Aviv Museum of Art; the massive Thek Artist’s Artist monographic show at the 2008 ZKM, Karlsruhe and Reina Sofia, Madrid and the 2010 retrospective held at the Whitney and Hammer Museums; and the important place given to Hannah Wilke in the exhibitions Wack!, elles@ Centre Pompidou, and in the Museum of Modern Art’s most recent permanent collection display, Counter Forms contributes to a burgeoning counter narrative that makes room for a wider, messier, and perhaps more compelling history of artistic practice in the 1960s and ‘70s.

Elena Filipovic is Senior Curator at WIELS Contemporary Art Centre, Brussels. She has curated a number of traveling retrospectives, including Marcel Duchamp: A Work that is not a Work “of Art” (2008–2009), Felix Gonzalez-Torres. Specific Objects without Specific Form (2010–2011), and Alina Szapocznikow: Sculpture Undone, 1955–1972, co-curated with Joanna Mytkowska (2011–2012), in addition to organizing solo exhibitions with artists such as Leigh Ledare, Klara Lidén, Lorna Macintyre, Melvin Moti, and Tris Vonna-Michell. She was guest curator of the 14th Prix Fondation d’Entreprise Ricard, Paris (2012) and the Satellite Program at the Jeu de Paume, Paris (2010) and has, since 2007, been tutor of theory/exhibition history at De Appel postgraduate curatorial training program and advisor at the Rijksakademie in Amsterdam. Her writings have appeared in numerous artists’ catalogues as well as in Afterall, Artforum, frieze, Kaleidoscope, and Mousse.

Alina Szapocznikow was born in 1926 in Kalisz, Poland. After surviving three concentration camps during WWII, she trained at studios in Prague and the École des Beaux-arts in Paris. She first began showing her work in 1950 and held her first two-person show at the National Gallery of Art, Warsaw, in 1957. She moved to in Paris 1962, which remained her home until her death in 1973 at the age of 47. Important solo exhibitions include those at the Musée d'Art Moderne de la Ville de Paris, the Stedelijk Museum, Amsterdam, Kunsthalle Basel, Camden Arts Centre, London, and the National Museum of Warsaw. In 2012, her retrospective Alina Szapocznikow: Sculpture Undone, 1955–1972 was shown at WIELS Contemporary Art Centre, Brussels and traveled to the Museum of Modern Art, New York, the Wexner Center for the Arts, Minneapolis, and the Hammer Museum, Los Angeles. Her work is in the public collections of the Museum of Modern Art, New York, Centre Pompidou, Paris, the Tate Collection, London, the Hammer Museum, Los Angeles, and the Museum of Contemporary Art, Los Angeles, as well as numerous institutions across Poland and Western Europe.

Paul Thek was born in Brooklyn in 1933. He studied at the Art Students League, the Pratt Institute, and Cooper Union School of Art in the early 1950s. In 1954, Thek moved to Miami and first exhibited his works in 1957 at Mirrel Gallery. He was the recipient of the Fullbright Fellowship in 1967 and National Endowment for the Arts Grant in 1976. Thek’s work has been shown at numerous exhibitions internationally, including The Arts Club of Chicago, The Corcoran Gallery of Art, P.S.1 Center for Contemporary Art, Palais de Tokyo, Tate Gallery, Stedelijk Museum, and Moderna Museet. From 2010 through 2011, his retrospective traveled from the Whitney Museum of American Art to the Carnegie Museum of Art and the Hammer Museum. His work is in the collections of major American and European institutions, including the Museum of Modern Art, New York, the Whitney Museum of American Art, the Los Angeles County Museum of Art, the Hirshhorn Museum, the Walker Art Center, Centre Pompidou, and the Ludwig Museum.

Hannah Wilke was born in New York City in 1940 and trained at the Tyler School of Fine Arts at Temple University, Philadelphia. She began exhibiting in 1961 and primarily worked in New York City, where she taught at the School of Visual Arts from 1972-1991. She was the recipient of the 1982 John Simon Guggenheim Memorial Foundation Fellowship in Sculpture, as well as three National Endowment for the Arts grants for performance and sculpture and two Pollock-Krasner Grants. Select retrospectives of her work include University of Missouri (1989), Neuberger Museum, Purchase, NY, (2009)and Nikolaj Contemporary Art Center, Copenhagen (1998). Key museum presentations include the first Whitney Biennial (1972), Los Angeles County Museum of Art, the New Museum, Metropolitan Museum of Art, National Portrait Gallery, Washington, D.C., the Art Institute of Chicago, Centre Pompidou, and Museum Ludwig, Cologne. In 2011, the Museum of Modern Art, New York devoted a gallery in the permanent collection solely to her work, including drawings, latex sculpture, assemblage, and video. Wilke’s work is included in major public collections including the Whitney Museum of American Art; the Guggenheim Museum, New York; Yale University Art Gallery; the Los Angeles County Museum of Art; Museum of Contemporary Art, Los Angeles; Tate Gallery; Centre Pompidou; the Reina Sofia Museum; the Helsinki City Art Museum, and the Tokyo Metropolitan Museum of Photography.
www.andrearosengallery.com