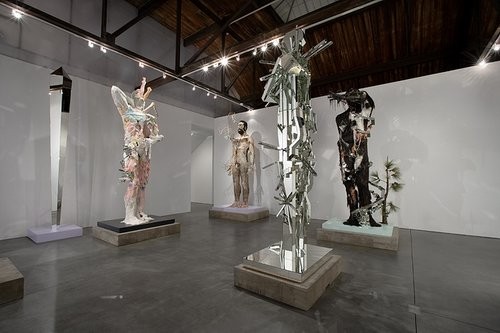 Andrea Rosen Gallery is delighted to announce David Altmejd’s second solo exhibition at the gallery and his first one-person show in New York since 2004. One of the pleasures of following Altmejd’s career is being witness to an artist with an insatiable passion for the opportunity to grow his practice in scope and complexity. In 2007 alone, Altmejd was not only selected as one of the youngest artists to represent a country at the Venice Biennale, but also produced a stunning body of work that many considered one of the most impressive of the national pavilions.
Speaking to his ability to conjure new and more incredible works, Altmejd helped inaugurate the newly designed Museum of Contemporary Art, Denver with a mirrored installation of six colossal giants only six months after turning the notoriously challenging space of the Canadian pavilion into a jewel-like aviary.
Altmejd’s diverse and varied oeuvre includes his familiar platform-like structures punctuated by mirrored reliquaries of crystals, flowers, birds, and werewolf bodies and body parts, an inventive assortment of singular werewolf heads, clear Plexiglas boxes filled with an intricate tracery of gold chains, his spectacular aviary filling the Canadian Pavilion at the 2007 Venice Biennale, uncanny part-bird part-human sculptures, a sculptural clock representing the temporal process of its making, and most recently colossal giants. This array of characters and forms speaks not only to Altmejd’s inventiveness but also to the strength of his aesthetic and conceptual program. Instead of an incongruent assortment of ideas and objects, Altmejd’s body of work is always recognizably his own, simultaneously expansive and coherent.
For this exhibition Altmejd will present a body of new giants. The works being created for this exhibition are unique in their use of every part of Altmejd’s pre-existing vocabulary to create a group that expands the language of the giants, with each being completely different from another. The giants, while evoking the history of monumental
sculpture, also incorporate the more recent discourse of Minimalism and the Part Object. Altmejd melds and weaves the disparate yet connected institutional critique of Minimalism and its radical eradication of visual incident with the luscious surfaces and psychological eruptions of the work of artists associated with the Part Object, which, to quote art historian and critic Helen Molesworth, are works that seem “skeptical of language’s ability to contain our bodily experiences” and offer “a series of imperfect vessels, cast objects filled with the matter of their own making, surfaces resistant to words.”
Altmejd is known for creating works which set up a duality between a geometric architectural space and more figurative material, manifest in his well known platform-like sculptures housing a glittering cabinet of curiosities. In the giants, the figure also becomes the structure, melding the two formal facets of hard-edged and amorphic. The body itself is pictured as a contingent form, a psychic container, and a field of unending transformation and renewal governed by social and environmental forces. Like a biological organism, Altmejd’s sculptures are always in a state of becoming. Mirrored, spiraling staircases are a visual metaphor of infinity and the seemingly growing clusters of crystals and mirrored cubes, hair, and stalactite epoxy clay all work to picture a sculpture in a constant state of change. In the viewer’s imagination, Altmejd’s work operates not as a resentation, but rather, as a material with which to construct and reconstruct meaning over and over again.
In a world where we have become used to having to decode the artist’s intentions, Altmejd presents work so filled with content and embedded with meaning that it allows the viewer to bypass the need for a simple intellectual explanation and allows him or her to instead become a visceral participant in the construction of worlds that much like our own are forever a mystery, infinite in their ability to change, generous in meaning—a world of glittering growth and sublime decay, of heart rending pain and ravishing desire.
David Altmejd received his BFA in visual art from Université du Québec à Montréal in 1998 and his MFA from Columbia University in 2001. Altmejd’s work has been included in the 2003 Istanbul Biennial, the 2004 Whitney Biennial, and in 2007 Altmejd represented Canada at the Venice Biennale. For 2008 he has been selected to participate in La Triennale québécoise at Musée d’Art Contemporain de Montréal and the Liverpool Biennial at Tate Liverpool. Altmejd’s works can be found in the collections of the Whitney Museum, New York, the Guggenheim Museum, New York, and the Art Gallery of Ontario, Toronto.
For more information and images please contact Jeremy Lawson: j.lawson@rosengallery.com
www.andrearosengallery.com