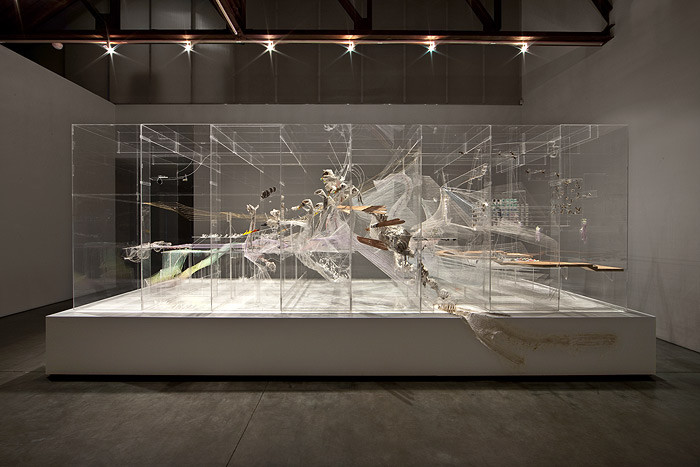 David Altmejd will present two extraordinary new bodies of work in his third solo exhibition with the gallery. Two large Plexiglas sculptures of an unprecedented scale for the artist share the space with a more ethereal group of works. These Plexiglas structures contain entire landscapes that are immensely and painstakingly detailed. Their scale and composition both encourage a close reading of details and yet purposefully disallow the viewer to grasp the whole all at once. For the first time, Altmejd will intervene into the architecture of the space with large scale sculptures scraped out of and embedded within the walls of the gallery. Just as the Plexiglas works represent a material shift from the exterior surface to the interior structure, between the inside and the outside, the embedded plaster sculptures turn space itself into an analogue of Altmejd's investigation into notions of interiority and exteriority in his practice. As definitions between inside and outside become blurred, Altmejd shows them at once to be both malleable distinctions and part of a continuum. At stake in these works is the fantasy of unity and containment. Just as Altmejd has shown how bodies can be so violently acted upon by interior and exterior forces, in his work the apparent neutrality and solidity of architecture is shown to be unable to contain the overflow of ideologies and agendas embedded within—the body of the space bursting and the walls becoming a porous membrane.

While these bodies of work seem so clearly new in Altmejd's practice, they are also visions into the whole of his existing oeuvre. It is the strength and uniqueness of Altmejd's visual vocabulary that allows him the freedom to develop his work in such radical ways. The bravery with which Altmejd approaches the invention of new bodies of work is an organic extension of the larger conceptual concerns at the core of his practice. Altmejd's work makes evident how growth and transformation is only possible from decay and how a sense of a work being alive is perceived most fully when beauty is contrasted with the abject. Set against a prevailing cultural and political headwind valuing tradition, certainty, and stasis, Altmejd's work is a physical manifestation of an ideology of growth, change, and perpetual movement.

In Altmejd's work, chaos and order are shown to be two related states that can generate each other. In one Plexiglas work titled The Vessel 2011, plaster casts of arms and hands form swanlike shapes, with the hands holding (or throwing) beaks formed from modeling clay. The hands collectively take on the shape of a cresting wave and embody the latent potential of that form as though tension is held in a perpetual climax. The line between violence and protection becomes blurred, as does our desire for one over the other. Seen from the front, the composition appears nearly symmetrical, but upon closer inspection each side has been crafted individually with the symmetry of the structure becoming displaced by the subjectivity of individual choices. Conversely, The Swarm 2011 is seemingly without symmetry and yet the accumulation of choices and decisions begins to suggest an ordered, planned composition. The Swarm is filled with hundreds of constructed bees, ants and hand-painted thread simultaneously evocative of a body's nervous system and natural forms like roots. Indeed, Altmejd's work mimics the complexity achieved in the natural world through the continual layering of elements and structures built up over millennia. Whether Altmejd begins from a point of symmetry or from a point of disorder, his works are ultimately shaped by the individual choices made at each point of construction. These works suggest the organic logic of the crowd where individual decisions can collectively generate a more intelligent whole.

Large plaster sculptures embedded within the gallery walls extend the scope of the exhibition to fill the entire space. Standing figures, also in plaster, are arrayed through the gallery and seem to have emerged from the walls and create a progression from the entrance, through the main gallery, and into Gallery 3, which features the embedded work Architect 2, 2011 that spans three of the gallery's walls. Both the wall sculptures and the embedded sculptures feature cast hands appearing to tear the works apart from within and leaving deep grooves in their wake. The surface and structure of these works are both a trace of the artist's process and a vision of a self-generating form. The hands are both pulling the form apart and building it up. Faces become replaced by hands or are covered in ears and each of the figures has holes and voids disrupting the unity of the body. Altmejd's works suggest a kind of infinite lineage with each work both exploring a particular idea and contributing to the opening of another. Rather than creating terminal artworks, complete and ossified, Altmejd's works are manifestations of objects that are always transforming and forever open. Rather than crafting puzzles for viewers to solve, Altmejd generates structures and landscapes to inhabit.

David Altmejd (b. 1974 in Montreal) lives and works in New York. Altmejd will be presenting a solo exhibition at the Brant Foundation Art Study Center, Greenwich in the late fall of 2011 and in May he will debut 'Twilight Tale', a lyrical visual fairytale with composer-performer Pierre Lapointe at the Galerie de l'UQAM in Montreal. Recent solo exhibitions include Le Magasin Centre National d'Art Contemporain in Grenoble, Gallery Met at the Metropolitan Opera House, New York and in the Fundacion La Caixa Museum in Barcelona. Last year he participated in the group exhibitions at the New Museum of Contemporary Art, New York; the Guggenheim Museum, New York; P.S. 1 Contemporary Art Center, New York; Dallas Museum of Art, Dallas and The Museum of Contemporary Art, Los Angeles. In 2009 he was awarded Canada's pre-eminent Sobey Award for contemporary Canadian art.
www.andrearosengallery.com