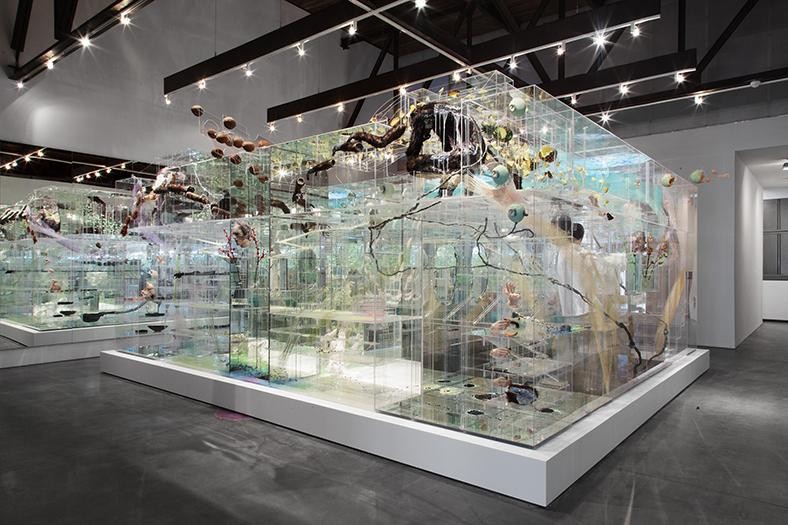 On the heels of his new, encyclopedic monograph published by Damiani and a forthcoming survey exhibition at the Museé d’Art Moderne de la Ville de Paris, we are proud to present David Altmejd’s fourth solo exhibition at the gallery.

Altmejd’s language unfolds over three exhibition spaces, creating distinct environments that shift perceptions of matter and time, surface and structure, interior and exterior. The progression starts with The Flux and The Puddle, a deeply layered slice of a universe that fills the first room of the gallery. Altmejd’s ability to hold seemingly infinite layers of information manifests itself in a transparent, mirrored and multilevel structure that houses all of the varied bodies of work in his extensive practice: werewolves, plaster figures, bird men, heads, smashed mirrored panels, and explosions of resin fruit. With its complexity and depth, the work demands a physical experience.

One action of the artist’s hand informs the next so that the work builds itself, yielding unexpected breakthroughs. Thousands upon thousands of intuitive decisions cumulate in a network of meaning. In The Flux and The Puddle, channels and staircases of pouring and pooling liquids intertwine among figures forming a circular progression between human and nonhuman, abstraction and representation. These animated arrangements are simultaneously frozen streams of expansion, isolation and disorientation.

Altmejd’s work often draws a corollary between the body and architecture with architectural landscape punctuated by figurative elements or figurative sculptures blown up to gigantic scale or infected with inorganic material. In the work in the second gallery, The Eve, a solitary, seated figure is inverted and suspended in space. The sculpture emphasizes the process of addition and subtraction; each detail is imperative. There is an intentionality in every line, scratch and hole. Combining three of Altmejd’s well known bodies of work: the architectural Plexiglas environments, the growing/organic body of werewolves and giants, and the suspended clay figures, the work is simultaneously radical and beautiful. In the third gallery the viewer is led to a human sized head. This head becomes a focal point of Altmejd’s language; a macrocosm condensed into a jewel-like microcosm.

Altmejd’s practice mines the space that separates the inside from the outside. Architecture becomes as much about permeability as structure. Seemingly disparate worlds, the nervous system and webs of energy or the mythological transformation of werewolves and the biological growth of fruit into plants are bound together. Using base material--thread, mirror, plaster, resin, sequins, artificial hair and ceramics--Altmejd’s work is an expression of the visceral power of sculptural objects.

David Altmejd was born in Montreal, Quebec in 1974 and received his MFA from Columbia University in New York. Altmejd is currently preparing for forthcoming exhibitions at the Art Gallery of Ontario, Toronto, Canada, from February 22 - October 4, and a major survey exhibition at the Musée d’Art moderne de la Ville de Paris (MAM/ARC) in October 2014. Most recently, Altmejd was recognized with a solo exhibition at the Brant Foundation Art Study Center in Greenwich, Connecticut (2011-2012). In 2007, the Fundació La Caixa Museum in Barcelona, Spain, presented a show of the artist’s work curated by Sílvia Sauquet. That same year, Altmejd was commissioned by Louise Déry to represent the Canadian Pavilion at the 52nd Venice Biennale, which was accompanied by a catalogue. He has also participated in the 2004 Whitney Biennial, curated by Chrissie Iles, Shamim M. Momin and Debra Singer, and the 8th Istanbul Biennial, curated by Dan Cameron in 2003. The artist’s work has been exhibited worldwide, and is in the permanent collections of numerous institutions, including the Solomon R. Guggenheim Museum, the Whitney Museum of American Art, the Museum of Contemporary Art Los Angeles, Galerie de L’UQAM, Les Abattoirs, Museé d’Art Contemporain de Montreal, and Museé d’Art Moderne Grand-Duc Jean, Luxembourg. The artist lives and works in New York.
www.andrearosengallery.com