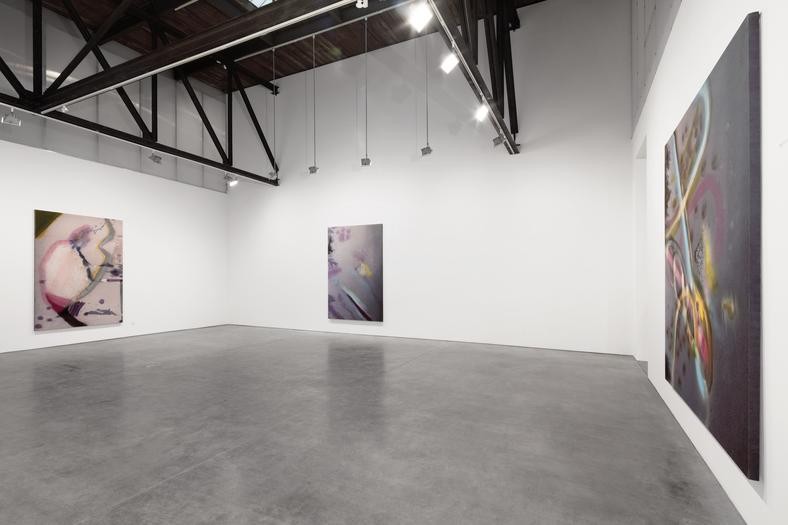 Andrea Rosen Gallery is pleased to announce Enigmas, an exhibition of works by Martin Barré, David Ostrowski, Julian Schnabel, and Reena Spaulings. Curated in collaboration with writer and art historian Alison Gingeras, the exhibition engages the notion of imprimatur.

Despite the word’s initial loftiness, it offers a precise entrée into a specific set of problems that many artists face when creating pictorial work. This exhibition hopes to explore the ways artists both physically and metaphorically create credible “imprints” or gestures at the same time that they generate a sanctioning belief in their various approaches to mark-making. The term “imprimatur” also brings to mind the burden of approval: in an ecclesiastical setting, the term refers to the Church granting permission to publish or print. In an artistic context, imprimatur addresses the artist’s need to create a distinguishing mark, to give credence to their enterprise (no matter how de-materialized, unorthodox or conceptual), to generate approval or faith in their oeuvre. In different ways, then, each of the artists in this show is concerned with signature residue: their works challenge the viewer into believing in the artistic aura of their gestures, however minimal.

An artist whose work is almost synonymous with the notion of imprimatur, Julian Schnabel has created a group of paintings that highlight his significance as a paradigmatic practitioner of contemporary abstraction. Many of Schnabel’s signature tropes—the use of dropcloths and soiled canvases, the incorporation of studio debris and other “imperfections” into the body of the work, and his re-imagining of found materials—have become celebrated gestures in contemporary painting. Although not always acknowledged, his influence is visible in the works of a current generation of painters that includes, Joe Bradley, Dan Colen, Sergej Jensen and Oscar Murillo to name but a few.

While Schnabel has been making paintings with spray-paint for more than thirty years, the body of work on view in Enigmas remains relatively unknown; these more recent paintings are built on a single found photograph whose weathered emulsions gave birth to an image beyond the original. The exhibition sets up a specific dialogue between Schnabel’s works and three significant oeuvres that provoke viewers to consider how meaning is created and communicated via even the most minimal of visual and conceptual gestures.

Martin Barré’s spray-paint works from the 1960’s establish an early chronological and conceptual anchor. Barré created spare, minimal figures which left much of the canvas open; when he began using spray paint in 1963 as a reflection of his appreciation of graffiti in the Paris metro, he employed a particular matte black to create white surfaces marked by traces or stripes.

David Ostrowski’s painting practice provides a contemporary counterpoint. Ranging from restrained blue marks on a raw canvas ground to barely visible foot print traces on a naked canvas, his work draws on the performative “aura” of these marks and is fueled by a self-generated mythology centered on his studio practice and his infamous foot fetish.

Reena Spaulings’ Enigmas series extends the theme of the mark-as-gesture into sociological terrain; formally, the soiled tablecloths from art-world dinners, stretched into minimal paintings, close the circle opened by Schnabel more than thirty years ago. The exhibition borrows its title from this body of work: its principal concern is the enigmatic process by which artists generate an “imprimatur” and invest their work with an aura of credibility.

In keeping with the Gallery’s program, this exhibition is grounded in a deep critical examination of the work. Presenting Julian Schnabel’s new paintings considers both his influence and his critical reception. Contextualized in relation to historical and contemporary practices engaging the physical, metaphorical, and sociological types of mark-making, the works provoke a simultaneously distinctive and historically positioned experience for deepened interpretation and reflection.

Martin Barré was born in 1924 in Nantes, France. He lived and worked in Paris.

David Ostrowski was born in 1981 in Cologne, Germany. He lives and works in Cologne.

Julian Schnabel was born in Brooklyn in 1951. He lives and works in New York City and Montauk, Long Island.