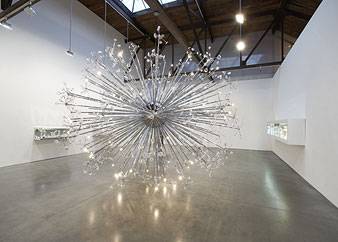 We are proud to present Josiah McElheny's first solo exhibition at Andrea Rosen Gallery, and to welcome an artist with such an established reputation and record of prestigious museum shows to the gallery.

For this exhibition, Modernity 1929–1965, McElheny presents three interrelated projects about the history of twentieth-century modernism. The title references the period of high modernism but also, more specifically, the dates of two historical anecdotes that serve as conceptual touchstones for his current sculptures. These works embody visions of modernity-the endless everywhere of Isamu Noguchi and Buckminster Fuller's utopian concepts; the insularity of repeated form suggested by mechanized production-and are culminations of McElheny's longstanding investigation of the modernist imagination. This inquiry takes an extraordinary turn in his newest work, an explosive hybrid of science and design and the exhibition's centerpiece.

An End to Modernity, McElheny's largest and most ambitious sculpture, finds its origins in a meeting in New York in1965-the year the Big Bang Theory was first introduced-when the architect for the Metropolitan Opera commissioned a Viennese design firm to create a chandelier with a "galactic appearance." With a spectacular use of chrome and glass, McElheny has reimagined this emblem of twentieth-century design as a sculpture depicting modernism's explosive demise. Commissioned by the Wexner Center for the Arts, McElheny collaborated with Ohio State University Cosmology professor David Weinberg to render a sculpture that, while appearing to be a 1960s manufactured object is also a scientifically accurate representation of the birth and history of the universe. A gleaming, complex assemblage of metallic spokes and approximately 1,000 glass globes and discs, the 16 foot wide and 12 foot high sculpture hangs six inches off the ground inviting the viewer to examine and parse its unique structure. It is accompanied by a digital print and a five-minute film, Conceptual Drawings for a Chandelier, 1965, segments of which were shot on location at the Metropolitan Opera House at Lincoln Center.

Architectural Model for a Totally Reflective Landscape (Park) and Architectural Model for a Totally Reflective Landscape (Playground) continue a group of work inspired by a conversation between Buckminster Fuller and Isamu Noguchi at a bar in New York in 1929. At Romany Marie's in the Village, Noguchi and Fuller speculated about the idea of form without shadow and concluded that this would only be possible with totally reflective forms within a totally reflective environment. McElheny's "models" of Fuller and Noguchi's proposal-that use the form and sculptural vocabulary of Noguchi's mostly unrealized proposals for modernist landscapes-offer up a seductive experience of an "aesthetic utopia" while implying the inhuman climate of conformity it would demand.

Twentieth Century Modernism, Mirrored and Reflected Infinitely, continues a series of sculptures in which modernist design forms are remade as reflective objects and displayed in environments of endlessly repeating mirrored reflections. This, the largest version in the series to date, includes early to late twentieth-century forms from Austria, the Czech Republic, Scandinavia, and Italy. These four versions of modernism, each reflected within enclosed bays of a sprawling sixteen-foot case, evoke capitalism's promise of endless repeatability of form and product. Here they refract infinitely, out of reach.

Josiah McElheny was included in the exhibition celebrating the reinstallation of The Museum of Modern Art in 2004, and in "Part Object Part Sculpture", the inaugural exhibition at the Wexner Center for the Arts in 2005. Born in Boston, Massachusetts in 1966, McElheny lives and works in New York City.