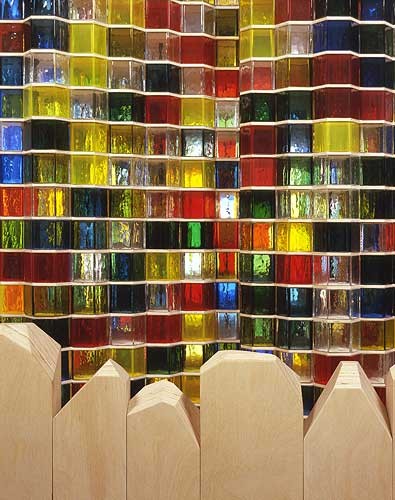 We are delighted to present Josiah McElheny's second solo exhibition with Andrea Rosen Gallery, Proposals for a Chromatic Modernism.

One of the deep satisfactions of following McElheny's career as an artist is to continue to witness the expansion of his physical mastery alongside the deepening of his conceptual rigor. While embedded with labor and rich in ideas, the breadth of his work shares a simultaneous appearance of effortlessness and awesome complexity. The surprising clarity of intention in McElheny's work starts with the thorough and exacting research he undertakes in order to conceive them. In the process of relentlessly investigating our cultural history, McElheny has accumulated unique insights and an ability to intuitively deconstruct heightened moments of social idealism. While a seductive material beauty has been a key part of the power of his work, McElheny has often been acknowledged for the intellectual intensity in his artwork and in his writing, even receiving the rare and prestigious MacArthur Fellowship in 2006. With this information in hand, he then allows himself to become fully immersed in the vigorous manual process. Proceeding forward from recent reflective installations, McElheny now presents us with a colored universe of interiors and architecture, some rough and unfinished, others polished to a high gloss. He utilizes his exhaustive study of glass manufacturing processes to produce—in his own studio—luminous color effects in blown and molded glass, combined with typically collaborative efforts with experts in wood, metal, etching and photography.

The exhibition Proposals for a Chromatic Modernism is a devoted analysis of twentieth century modernism and its ideological legacies. Past projects have embodied mid-century notions of purity, transparency, and repetition and pushed them to their extremes. For this show, iconic period design is renewed and reattributed, and architectural schemes are altered and re-imagined. If twentieth century modernism became inexorably linked to the development of global capitalist culture, Proposals for a Chromatic Modernism sees McElheny attempting to revitalize this moment in aesthetics through a literal and figurative expansion of its palette.

The exhibition's centerpiece is an eight-foot tall sculpture based on Mies van der Rohe's earliest model of a glass-clad skyscraper. Mies's model, as depicted in a series of photographs he took in 1922, is a transparent monolith that towers above a swarm of vernacular housing he designed to appear horrifying and decrepit. McElheny's sculpture, Bruno Taut's Monument to Socialist Spirituality (after Mies van der Rohe), is an enlarged version of this original maquette that recasts Mies's design in the spirit of rival architect Bruno Taut. Made from birch ply and stacked blocks of multi-colored glass, the model has been made anew to reflect Taut's belief in translucency (not transparency) and the transformative spiritual power of wildly colored enclosures.

Three wall-mounted sculptures continue McElheny's theme of historical revisionism. In each, such as Lilly Reich (and Wilhelm Wagenfeld), Blue, a piece of iconic modernist furniture by a celebrated designer has been remade, polished to a high-gloss finish, and wholly colored red, yellow, or blue. The titles of the sculptures reattribute these forms to the artists who in fact designed them—in this case all women. On each sits a collection of replicated modern-era glassware by a different designer that has been hand-blown by the artist in matching colored glass using a special technique to achieve a high level of tonal consistency. Despite this, the forms appear strangely luminous and fluid, attesting to the inherent variability of color and light.

A photograph Mies took of his skyscraper model in 1922 is the ground for McElheny's series of photo-based drawings, Bruno Taut on Mies van der Rohe (1922), i-iv. In each, the black-and-white photograph is colorfully defaced with photo-retouching pencils: Taut's multicolored visions are overlaid on Mies's picture of purity and transparency.

A suite of thirteen framed prints, White Modernism, rounds out the show and bridges it with McElheny's earlier explorations of modernist ideas of purity and morality. Precise silhouettes of period glassware from Europe are described in white ink on handmade paper, a white-on-white-on-white surface that creates a subtle visual shift—the forms are seductively graphic at one moment and then are lost in a field of white. This perceptual instability echoes McElheny's belief in the dual nature of modernity: its alluring "perfection" and its terrifying obliteration of difference.

We are thrilled to announce McElheny will have a beautiful new monograph published by Rizzoli in the upcoming year. The book will be the definitive publication on McElheny's practice thus far and includes a broad sample of his writing, performance, film works and sculpture. The Museo Nacional Centro de Arte Reina Sofía, Madrid recently published a spectacular fully illustrated catalogue entitled "A Space for an Island Universe" that explores a monumental installation based on Kant and modern cosmology. Additionally, the University of Chicago Press will publish McElheny's artist's book on the German writer Paul Scheerbart "The Light Club" in 2010.

It is our pleasure to share that in the same time frame as his own solo exhibition at Andrea Rosen Gallery McElheny has been invited by acclaimed curator, Helen Molesworth, Houghton Curator of Contemporary Art at the Harvard Art Museums, along with William Pope.L and Sharon Hayes, to participate in the project "Allan Kaprow YARD", guided by Kaprow's philosophy that "Yard" could be realized again at a later date, different space and now, by other people. On view beginning September 23, 2009.