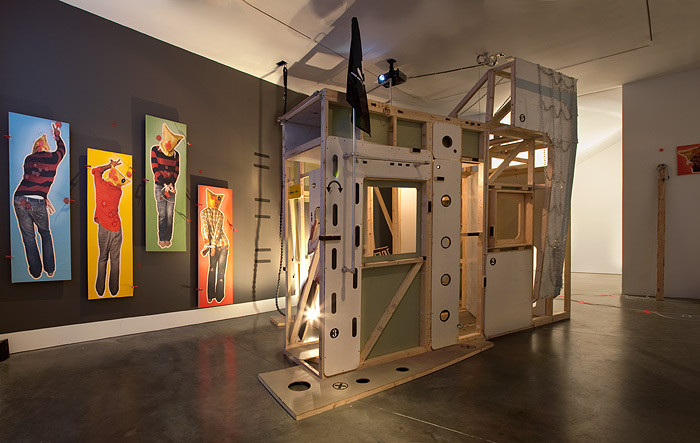 Andrea Rosen Gallery is pleased to present Lior Shvil's first solo exhibition in New York, Operation OZ Belev-Yam, curated by Andrea Zittel, in Gallery 2. The work is characterized by Shvil's sense of absurdist humor, intimacy and pathos which all serve to frame political issues as larger existential problems rather then ideological positions.

The first character we meet in Shvil's latest work is Benni, played by Shvil – and presented as a large projection on the back wall of the gallery. Benni is a veteran officer of the Israeli Special Forces who manages combat training for a private company abroad that specializing in the creation of private security forces. His character is a specialist, a survivalist, and his language reveals these underlying ideologies of power.

Under Benni's command, the warrior OZ (also played by Shvil) performs a training exercise as live performance in the Vessel 101 – which later also appears as surveillance-style footage. The Vessel 101, a large framed structure, evokes a ship that is invaded by the warrior's movements throughout its orifices – as Shvil problematizes male power and aggression with the violence of his movements, the character in a sense violates and defiles the vessel. The last characters played by Shvil are a series of victims whose photographic images populate a series of targets that the warrior OZ uses for his training mission.

OZ Belev-Yam (meaning "brave in deep water" in Hebrew) refers to the period of time before the establishment of Israel. The story of OZ Belev-Yam is told to children, (in much the same way that we use Western Stories in our culture), to create narratives of good and evil and instill values of bravery, heroism and valor. In Benni Engage and Control, Shvil takes those heroes and puts them in contemporary narrative – through his eyes we see a more corrupted and absurd rendition of this ideology. The vessel in his story is derived from the Zionist myth of the Exodus – a ship that left France in 1947 with a cargo of Holocaust survivor refugees – but was commandeered by the British Royal Navy before it was allowed to reach Israel, and its passengers returned to Europe. Shvil contrasts this event to current day politics in which actions are reversed as Israeli forces intercept foreign boats destined for Gaza.

In the process of creating this work, Shvil has defined three types of aggression. True aggression, which he describes as being loaded with personality and ideology, conditioned aggression (such as the warrior's), which is generated by the military, is characterized by a standardized blind rage and is deeply instilled without being personal. And finally, commoditized aggression, as exemplified by Benni – which is the least personal form of aggression, generally emotionless, motivated more by the need for power than by fear or passion.

Shvil's material is drawn from direct observation of situations and events in his own life, or stories told to him by friends. Benni Engage and Control is based on practices in Israeli and US culture that play a substantive role in shaping both personal lives and international political relations – but which don't appear in mainstream media. For instance, since the 1980s there has been a market for ex-Israeli military personnel in order to fulfill duties in foreign private sectors and oversee military operations.

Shvil creates potent images and charged, psychologically juxtaposed environments through a range of mediums, including sculpture, video, photography, painting and live performance. Through the use of his own physical body, which is in turn punished, heroicized, ridiculed, and eroticized, Shvil creates a cast of characters who act as both the oppressors and the oppressed.
- Andrea Zittel

The exhibition will be accompanied by a series of live performances.

Lior Shvil was born in Tel Aviv, Israel and lives and works in New York. In 2010 he received his M.F.A from Columbia University. He has a Bachelor's degree in Architecture, and has completed a Post Graduate program in Art and Design from the Bezalel Academy, Jerusalem. Shvil has recently been included in shows at the Sculpture Center, NY; Socrates Sculpture Park, NY and in an exhibition dedicated to performance curated by Rirkrit Tiravanija especially for the 2010 Miami Art Basel. Shvil has had solo exhibitions at Herzliya Museum of Art, Herzelia, Israel (2008); The Heder Gallery, Tel- Aviv, Israel (2005) and Hamidrasha Gallery, Beit Berl, Israel (2004).
www.andrearosengallery.com