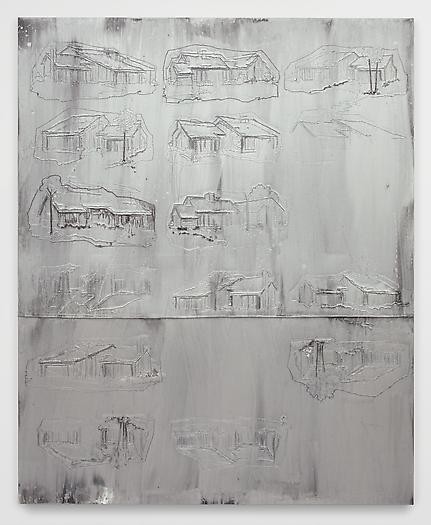 Andrea Rosen Gallery is delighted to announce Michael Raedecker’s fifth exhibition at the gallery, highlighting substantial new developments in the artist’s practice and anticipating an important traveling mid-career survey show opening at the Wilhelm-Hack Museum at the end of this year.

In a recent shift, Raedecker began cutting his painted canvases apart and stitching the fragments back together to form new compositions. The cut is disruptive and perverse: the rip becomes a repair and the fragmented scene becomes newly reanimated. In his newest body of work, Raedecker uses the intentional precision of this technique to interrogate our sentimental attachment to highly recognizable yet generic symbols of the good life: the suburban model home, the palm tree, the chandelier. These anonymous objects, repeated and set adrift in gestural monochromatic fields of paint, are placeholders for the whole history of the world, appearing and disappearing on the surface of the paintings.

The initial familiarity of these scenes allows for our personal investment in them, but the literal trace of the object, created by the puncture of the needle and gauge of the thread, continues to pull us back to the surface and to the painting itself as the object of extraordinary investment and inquiry. For Raedecker the decorative façade of a house is analogous to a painting – its flatness resists vision, reflecting instead the viewer’s own desires and fears. The painting, like the façade or the almost abstract filigree of a chandelier picked out in thread, is always a fragile surface, its loose narratives caving in on themselves, turning upside down and failing to resolve into known pictorial categories. This uncanny loop of recognition and estrangement is intensified by the newest sutures, which disrupt the integrity of the picture and memorialize the essential violence of representation.

The title of the exhibition invokes the tour as a journey undertaken for pleasure or inspection -- a contemplative invitation to the viewer with various way stations for connection, exchange and new perspectives.

Michael Raedecker was born in Amsterdam, Netherlands in 1963 and currently lives and works in London. He studied at the Rijksakademie van Beeldende Kunsten, Amsterdam (1993 – 1994), and at Goldsmiths College, London (1996 – 1997). In 2000, Raedecker was shortlisted for the prestigious Turner Prize. Recent solo exhibitions include volume at Hauser & Wirth, London (2012); Galerie Max Hetzler, Berlin (2010); and line-up which opened at Camden Arts Centre, London, England (2009) and travelled to Gemeentemuseum Den Haag, The Hague, Netherlands (2009) and Carré d’Art – Musée d'Art Contemporain de Nîmes (2010).
www.andrearosengallery.com