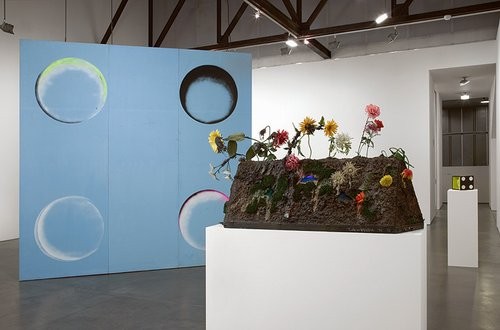 
No matter how, it is important to think about the relationship of polluted nature to the proliferation of electronics...the decomposition of humanity (humanism) and the old and traditional hierarchy of values. –Tetsumi Kudo, 1971

Not only did Tetsumi Kudo (1935-1990) – one of the most innovative artists in Japan in the 1950s and in France in the '60s and '70s – explore the existential possibilities for humanity in an increasingly polluted and consumption-driven world, issues critical in today's artistic practice and political debate; but in the two years since our last show and the major retrospective organized by the Walker Art Center, the wide-ranging and profound influence of his ideas and aesthetic has become increasingly clear. Mike Kelley wrote for the Walker catalog; Paul McCarthy has included Kudo in his lectures since 1968 and highlighted him as an influence in his intellectual autobiography Low Life Slow Life. Takashi Murakami, in seeing the last exhibition, has simply called Kudo, "the father of us all."

Built around major installations and definitive examples of Kudo's oeuvre secured from public and private collections in Europe and Japan, this exhibition will focus on two key groups of works, cubes and gardens, created in the decade after Kudo moved from Japan to Paris in 1962, and will elucidate the development of the artist's aesthetic and philosophical consideration of pollution, technology, and Western Humanism.

Designed as die, the cubes – made between 1962-1968 and sometimes stacked – are filled with store bought goods and household refuse like alarm clocks and egg cartons connected to, and often fusing with, plastic dolls and papier mâché body parts. Usually titled with variations of the words, "Your Portrait," these are meant as provocative representations of the European state of being: Individuals retreat into cocoons to take comfort in mass produced stuff and mediated entertainment. Within these shells, they undergo a process of metamorphosis becoming one with technology. The idea of individual agency at the core of Western Philosophy becomes false; people are subject to random forces beyond their control symbolized by Kudo's motif of dice.

This fusion is most evident in the centerpiece of the exhibition and one of the two most important works Kudo created, Garden of the Metamorphosis in the Space Capsule, 1968, a room-sized die equipped with UV light and designed as an environment for works which fluoresce in black light. Here, representations of molted skin – a metaphor for obsolete Humanist values – giant flowers, and wall-mounted and freestanding sculptures create an eerily seductive vision of man, nature, and technology as coequal and mutually dependent.

The Space Capsule also signals a shift in Kudo's work from cubes to gardens. In the latter, forms become more deformed and liquid; color more saturated. Visions of a New Ecology resulting from pollution and cultivation, these works marry meticulous artistic craftsmanship, mass produced objects and arch, if gorgeous color. They are thus, in themselves, aesthetic manifestations of the New Order. In 1971 Kudo proclaimed:

"I now prophesy the growth of the new ecology in the swamp of "polluted nature" and "decomposing humanity."
–Tetsumi Kudo, 1971

Tetsumi Kudo (b. 1935, Osaka, Japan) graduated from the Tokyo National University of Fine Arts in 1958. In 1957, he began exhibiting his work at the Salon of Independents, Yomiuri and had his first solo exhibition at the Galerie Blanche, Tokyo. In 1962, he moved to Paris thanks to the travel grant and Grand Prize awarded by the Second International Young Artist Exhibition, Tokyo. He spent 1962-1987 in Paris before returning to Tokyo, while exhibiting throughout Europe and Japan. Notable solo exhibitions include the Walker Art Center (October 2008); Andrea Rosen Gallery (June 2008); La Maison Rouge, Paris (2007); The National Museum of Art, Osaka (1994); The Van Reekum Museum, Apeldoorn and the Stedelijk Museum (1991). He has made appearances at the Venice Bienniale (1976) and also in landmark exhibitions such as, "Japanese Art After 1945: Scream Against the Sky," (Guggenheim Museum, 1994); as well as,"Japon des avant-gardes 1910-1970," (Centre Georges Pompidou, 1986); and "Out of Action: Between Performance and the Object, 1949-1979," (LA MoCA, 1998). His work can be found in the collections of the Centre Georges Pompidou, the Musée Moderne de la Ville de Paris, Chiba City Art Museum, Kurashi City Art Museum, Aomori Museum of Art, the Stedelijk Museum, Museum Moderner Kunst Stiftung Ludwig Vienna, Musée des Beaux Arts de Montréal, amongst others. Tetsumi Kudo died of cancer on November 12, 1990.
www.andrearosengallery.com