The Thing and the Thing-In-Itself 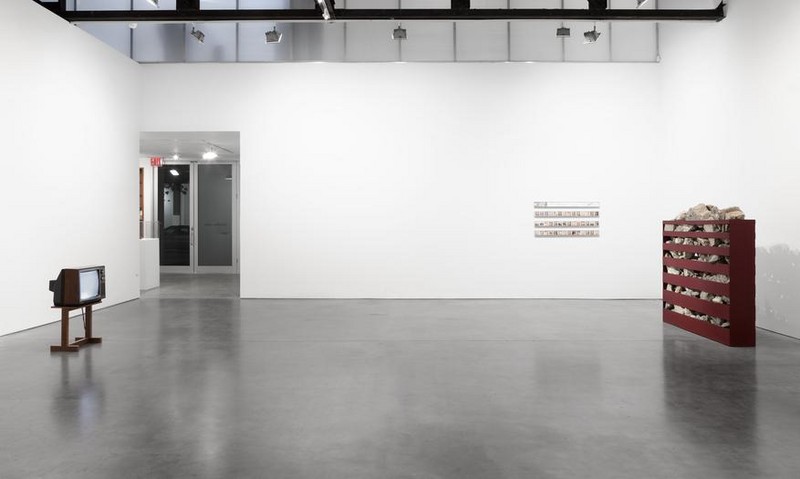 Andrea Rosen Gallery is delighted to announce The Thing and the Thing-in-Itself, an exhibition comprising a tightly focused group of 20th-century masterworks curated by noted art historian Robert Hobbs. Bringing together a compelling group of significant works, one by each of seven key 20th-century artists – Marcel Duchamp, Joseph Kosuth, René Magritte, Piero Manzoni, Yoko Ono, Ad Reinhardt, and Robert Smithson – this exhibition offers viewers the opportunity to look at familiar artists in a new way and with much greater depth, both in relationship to each other and in regards to their individual practices. It opens December 12, 2014 at the Gallery’s main space, 525 West 24th Street.

The Thing and the Thing-in-Itself focuses on the limits of human understanding that Immanuel Kant contemplated in The Critique of Pure Reason (1st ed. 1781). This philosopher speculated that humans only know things in the world through space and time, as well as the causes they attribute to these objects and events. Instead of accurately replicating the world, people’s understanding of it is dependent on their restricted ability to grasp it. In other words, they construct the world they experience, making sensory information idiosyncratic and/or socially oriented rather than accurate, and people’s perception of their world an ongoing film or performance. It helps to consider Kant’s term “thing-in-itself” as shorthand for the strict limits to the ongoing theater of everyday life humans produce, direct, and cast, so that they themselves can then serve as its main players.

This exhibition utilizes Kant’s approach to reconsider how certain twentieth-century artists engaged the frontiers of human understanding in works that pit people’s sight and insight against the limits of what they are able to comprehend, i.e. the things they believe themselves to be seeing as opposed to “things-in-themselves” (Kant’s code word for humans’ inability to move beyond their own constructed views). Instead of presenting an art endeavoring to reveal its contents to viewers with the least amount of interference, The Thing and the Thing-in-Itself features works that act out the limits of human understanding as they create mysteries, pose conundrums, and leave viewers with provocative questions.

Starting in the second decade of the 20th-century with Duchamp’s Readymades, art’s status as an object became a subject of inquiry, with questions about differences between ordinary things and art. The Thing and the Thing-in-Itself consequently begins with Duchamp’s assisted readymade, Comb (Peigne), a steel grooming tool for dogs, inscribed with the words “3 ou 4 gouttes de hauteur n’ont rien a faire avec la sauvagerie; M.D. Feb. 17 1916 11 a.m.” (“Three or Four Drops of Height [or Haughtiness] Have Nothing to Do with Savagery.”). The exhibition then surveys the following six notable steps in the history of the art/thing challenge. René Magritte’s La Clairvoyance of 1936 depicts a self-portrait of the artist in the process of metamorphosing his model, an egg, into a bird in flight on his canvas, thereby setting in place a tongue-in-cheek differential between representational painting and life. The early majestic black Reinhardt canvas from 1954 challenges the limits of sensory perception, with its grid poised on the divide between visibility and invisibility. Manzoni’s Declaration of Authenticity No. 50 (Carte d’authenticité No. 50) (1961), a small certificate signed by the artist, transforms the living body of a collector and patron into an “authentic work of art for all intents and purposes,” thereby endowing the artist himself with god-like powers. Kosuth’s Glass Words Material Described (1965) consists of exactly these four words painted on four transparent sheets of glass to undermine art’s putative transparency and accessibility. Ono’s 1966 live video feed of the sky above the gallery contrasts literalism with traditional expectations of transcendence. And Smithson’s Non-site: Line of Wreckage (Bayonne, New Jersey) of 1968 undermines the art object’s sovereignty as it creates an interplay between the metal bin containing landfill with a map and photographs of the site in Bayonne, making this work a dislocated boundary marker.

Marcel Duchamp, born in 1887 in Blainville-Crevon, France, lived and worked in Paris and New York until his death in 1968. His work is included in numerous prestigious institutional collections including the Museum of Modern Art, New York, the Philadelphia Museum of Art, the Art Institute of Chicago, the Menil Collection, Houston, the Tate, London, the Musée d ́Art Moderne de la Ville de Paris, and Israel Museum, Jerusalem, and has been recognized by recent solo exhibitions at Centre Georges Pompidou, Paris, and the Fundación Proa, Buenos Aires.

Joseph Kosuth, born in 1945 in Toledo, Ohio, lives and works in New York and Rome. His work appears in numerous institutional collections including the Whitney Museum of American Art, the Guggenheim Museum, and the Museum of Modern Art in New York, and the Tate, London, has been exhibited at the Venice Biennale (1993). His work has been featured in recent exhibitions at prestigious institutions including the Museum fur Moderne Kunst, Frankfurt, and the Fondazione Prada, Ca’ Corner Della Regina, Venice.

René Magritte, born in 1898 in Lessines, Belgium, and lived and worked in Brussels until his death in 1967. His work is appears in prestigious institutional collections throughout Europe and the United States, including the Museum of Modern Art, New York, Moderna Museet, Stockholm, Centre Georges Pompidou, Paris, the Royal Museums of Fine Arts of Belgium, Brussels, and the Tate, London, and was recently recognized by comprehensive solo exhibitions at the Museum of Modern Art, New York, the Menil Collection, Houston, and the Art Institute of Chicago, beginning in 2013.

Piero Manzoni, born in 1933 in Soncino, Italy, lived and worked primarily in Milan until his death in 1963. His work has been featured in solo exhibitions throughout Europe, including retrospectives at the Musée d'Art Moderne de la Ville de Paris, the Serpentine Gallery, London, and the Museo d'Arte Contemporanea Donnaregina, Naples, and appears in established institutional collections including the Tate Modern, London, the Museum of Modern Art, New York, Stedelijk Museum, Amsterdam, and Galleria Civica d'Arte Moderna e Contemporanea, Turin.

Yoko Ono, born in 1933 in Tokyo, Japan, lives and works in New York City. Ono has had comprehensive retrospectives at prestigious institutions including the Whitney Museum of American Art, the Walker Art Center, and the Contemporary Arts Museum, Houston, including her most recent and largest retrospective in 2013 at the Schirn Kunsthalle, Frankfurt, which traveled to the Louisiana Museum of Modern Art, Humlebæk, Denmark, Austria’s Kunsthalle Krems, and the Guggenheim Bilbao Museum, Spain.

Ad Reinhardt, born in 1913 in Buffalo, New York, lived and worked for the majority of his life in New York City until his death in 1967. His work has been most recently featured in a comprehensive solo exhibition at the Josef Albers Museum Quadrat in Bottrop, Germany, and is part of prestigious permanent institutional collections including the Whitney Museum of American Art, the Museum of Modern Art, New York, and The Museum of Contemporary Art, Los Angeles.

Robert Smithson was born in 1938, in Passaic, New Jersey, studied in New York City and worked throughout the United States and abroad until his death in 1973, in Amarillo, Texas. His work has been the subject of numerous solo exhibitions at major institutions, including comprehensive retrospectives at the Museum of Contemporary Art, Los Angeles, the Whitney Museum of American Art, New York, the Musee d’Art Moderne de la Ville de Paris, and the Dallas Museum of Art, among others.
www.andrearosengallery.com