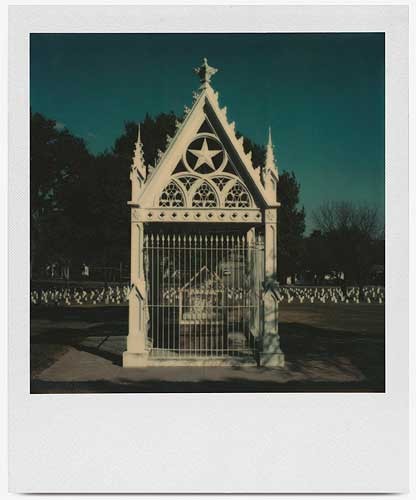 The Wedding (The Walker Evans Polaroid Project) is my response to an invitation from the Andrea Rosen Gallery to curate my first exhibition in New York.

The only stipulation was that I include at least one from the series of Polaroid images made by Walker Evans during the last year of his working life. The request to include something by him resonated with me because I had assembled an extensive collection of his black-and-white images 20 years ago, which I showed together with works by contemporary artists in several exhibitions. Positioning archival photography in a contemporary-art setting had actually become central to my practice by 1991.

Otherwise, I was given complete freedom to explore the architectural and cultural context of the Andrea Rosen Gallery, just as Chris Dercon and Thomas Weski allowed me to explore Munich's Haus der Kunst for my 2003 show, Partners. In my practice, my approach is to develop a site-specific work, conceiving and executing each show as an artistic embodiment of the particular exhibition space. I start with the context and search for ways to develop a relationship with it that is expressed through layered metaphorical connections. I use an artistic process to create a site-specific curatorial composition that interweaves narratives from disparate discourses using disparate elements. These elements are in no way aligned art historically, and I regard each as a fundamental component of the composition that bears no substitution, not even from the same body of work.

I have never come into the Andrea Rosen Gallery without feeling the majesty of the cathedral-like architecture of its main gallery. The ceiling, in particular, with its magnificent skylight and dark brown loft planks sloping down to a strong supporting steel structure, lifts the eye.

But how to show Evans's small Polaroids in such a monumental space? My curatorial challenge was in part to find a means of negotiating between the physical space and the scale of the Polaroids, but also to fully respect the content of the humble but masterful Polaroids.

Ultimately, the problem inspired the solution. I decided to make a show that focused on Evans's photographs of architectural structures and details. Each image is one of a filmic suite of pictures snapped sequentially and precisely composed. Each records the photographer's engagement as he circled his subjects, capturing them in a succession of portraits. He found something curious and engaging from every angle in the inventory of everyday dwellings. I noticed that all the Polaroids
of architecture showed buildings with their windows covered by blinds and shutters or, when abandoned, with no windows
at all. Evans shot his vernacular subjects with his characteristic combination of curiosity, persistence and detachment.

The Wedding (The Walker Evans Polaroid Project) ultimately came to include: 83 Walker Evans Polaroids; elements from Bird, a body of work by Roni Horn made between 1998 and 2007; a collotype from Eadweard Muybridge's 1887 Animal Locomotion series; a photograph of c.1900 Paris by Eugène Atget; a 19th-century French model of a cooper's workshop, with tools to scale; a large, 19th-century English birdhouse; and a selection of early 20th-century American Arts and Craft Movement furniture, including original and custom-replications, designed by Gustav Stickley.

A list of components, however, like a roster of artists, indicates little about the content of any of my shows. My exhibitions are meant to be poetic rather than didactic, amalgamating diverse individual works and objects into a coherent whole. A curatorial composition has its own unity and point of view, like an individual work in any artistic medium. Artworks and objects stand in specific relationships to each other, both in terms of their physical placement and their cognitive consonance, dissonance and resonance. Their form and the medium in which each is made, as well as the places in which they are set, provide opportunities for viewers to mine them individually and together for meaning, knowledge and insight.

The Wedding (The Walker Evans Polaroid Project) is a direct function of my own intellectual and experiential engagement with specific artworks in tandem with the space. But while my shows always start from something that resonates in my own experience, they should not be taken as autobiographical. I am especially allergic to hearing that my curatorial practice is autobiographical since this mistaken focus on my back-story- or, indeed, that of the artists included-short-circuits the experience conveyed by the works and by the exhibition. An artwork is a manifestation of an artist's world view. My role, as I
see it, is to grasp something significant in a work of art and then position it in a way that brings its insights to the foreground.

I do not develop a thesis for a show and then find and fit objects into the space as illustrations. I consider the locale for each show carefully-physically, geographically and as a specific cultural place-and look for ways to stage the art as I perceive it and as I think it might resonate best for viewers in that particular context. Each object, of course, has its own history and narrative, but my goal is to reveal fresh insights into the objects exhibited as individual entities and as components of the exhibition. My aim is to mediate between the exhibition space and viewers to reveal multiple layers of meaning in the works and something significant about the locale.

Making an exhibition is a public act that transcends the interests of the individual curator who created it. I make exhibitions for other people to see and benefit from by provoking their own critical-creative engagement. The autonomous elements on display have dual roles-as fixtures that pin down the cultural-diagnostic content of the works in their original historical context, and as paradigms that function as provocative contemporary-art gestures in a contemporary-art gallery. My shows are designed and constructed to offer viewers a challenging and visceral opportunity, through contemporary art and non-art objects, to reflect not only on the components of the exhibition, but also on their own experience of and engagement with the objects individually and in the way they are assembled. I trust viewers to be receptive and bring their own perspectives to bear on what they encounter in my shows. I hope for an audience that is comfortable with metaphor and willing to look beyond the obvious thematic links to think about what they see.

I do not provide an essay that interprets what I have assembled. I don't try to interpret the work for viewers. Instead, because the elements extend outside the arena of contemporary art, I put together "Notes" that contain all that is required for a thoughtful viewer to experience the work without having to be a connoisseur in the various disciplines of the pieces on display. They can then move to the level of metaphor and meaning more easily without being told how to think.