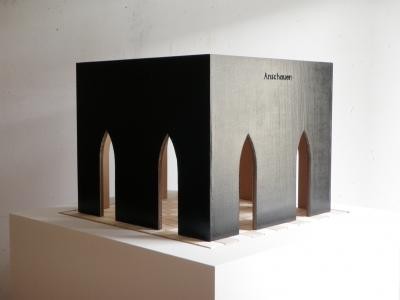 Thomas Palme with Berthold Reiss and Anne Roessner present works by Munich-based artists that are less about a local, artistic or social correlation than about the autonomy of, or diversity among, their positions. For Palme, those who push at their own subjective boundaries are the most likely to envision the ‘end,’ the apocalypse. The exhibition emphasizes this point of view while obverting this vision because in it, subjects become figures to be looked at.

“Apokalypse mit Figuren” is the german title (in English: “Apocalypse with figures”) for a series of woodcuts by Albrecht Dürer from 1498: “Apocalypsis cum Figuris”. “Apocalypse” means an ending of the Old and an unveiling of the New. The “figures” appear to be ending and beginning, as dark and light contradict not just in logical terms, but also in visually forming a kind of chorus about mysterious figures, drawn out so as to reveal what they embody. Nietzsche called this counterpart apollonian and dionysian, an “antagonism towards genesis and intention”, an antithesis, where one is still able to conceive, if one no longer knows on which side one is standing. “Apokalypse mit Figuren” is emblematic of this antithesis. Thomas Palme's “poem on the ending of capitalism” serves as an introduction:

Their insurances become worthless.
Their cars don't drive anymore.
Where there was despair, rules silence.
Death rides across the country.
www.grimmrosenfeld.com