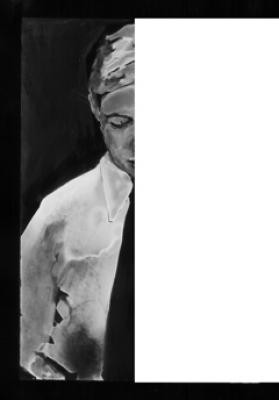 Andreas Grimm Munich is pleased to announce an exhibition of new works by Matt Saunders.

Saunders’ work is drawn from films, but not only concerned with the history of that medium. His work engages with our spectatorship of the movies - the way that we identify with them, live with them and experience them over time. Taking the form of painting, drawing, short films, and photography, Saunders’ work takes an approach that is at once analytic and personal, building its own history, both of materials and of subjects.

For this, his third solo exhibition with the gallery, Saunders will show a new series of photographic works. The photographs are not printed from traditional negatives, but rather are printed directly from 'negatives' drawn by the artist with ink on transparent mylar.

This series of work is a portrait of the German actress, Hertha Thiele (1908-1984), and the third part of a series that has occupied the artist for well over a year. When Saunders moved to Germany several years ago, he knew Hertha Thiele from her performances in the films 'Mädchen in Uniform' (1931) and 'Kuhle Wampe' (1932), the only feature film made by Bertolt Brecht. These were Thiele’s first two films, made when she was 22 years old, and he was shocked to find her more or less missing from the record after that. In 1937, Thiele had moved to Switzerland, and was unable to work as an actress there, and only in the late 1960’s, she moved back to the DDR and had a modest career, until her death in 1984. Saunders’ work is concerned with his search for these public images that remain, images that bookend a thirty-year gap. Last year, he produced an artist’s book, republishing the only (out of print) biography of Thiele, re-edited with his own images.

This past June, for Art Basel Statements, he created a layered installation of photographs made from 'negatives' he’d drawn based on the span of Thiele’s career. At the center of this installation was a series of gaps or sudden cuts, as well as the activity of re-visiting or re-drawing an image again and again.

This exhibition is Saunders’ third approach to portraying Thiele, and takes its cue from cuts famously made by the censor to the original version of 'Kuhle Wampe'. Saunders shows works that were 'cut' from his installation in Basel - both finished works that were not shown and ideas that were never completed. Thus, the 'censor' here is not only the vicissitude of Thiele’s life, but also Saunders himself.
www.grimmrosenfeld.com