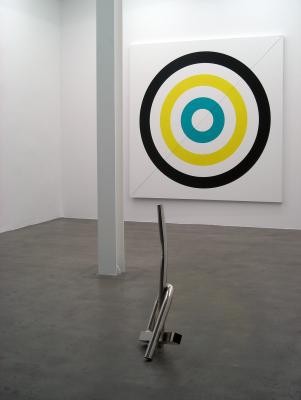 
Andreas Grimm München is pleased to announce the opening of MAXIMAL MINIMAL on Thursday, March 12, 2009.

The title of the exhibition is meant to juxtapose the term ‘Minimal Art’ with its antonym ‘Maximal’, not as a paradox or contradiction, but rather as a combination of thoughts on the nature of the works shown. It explains the relationship of the history and influences of Minimalism on contemporary art. From its beginning at the German Bauhaus to the American Minimal Art of the 60's, the term ‘Minimal’ reflects a reduction within a formal repertoire, but can be misinterpreted as a limitation within its own artistic field. The exhibition shows that despite a formal reduction within individual works, artists achieve a maximal effect on the viewer. The drawings, sculptures and paintings included in the exhibition may suggest that, although the aesthetics of some have a more academic and interpretative meaning rather than an immediate and material approach, aesthetics and substance should not be mistaken as contrasting poles, but rather as coexisting components of Minimal Art. In this way, the exhibition provides different avenues through which the viewer may experience contemporary interpretations of Minimalism.

Among Carl Andre, Robert Morris, Sol Lewitt, Dan Flavin, Fred Sandback or Richard Serra, Donald Judd (*1928 in Excelsior Springs/Missouri, †1994, New York, USA) is considered to be one of the pioneers and protagonists of the American Minimalism. His wall sculpture ‚Untitled (87-28 Menziken)’, 1987, shown at Andreas Grimm München points out the spacial dimension of works of Minimal Art as well as its Classicism in terms of the movement.

A cursory view on the drawings of Terry Haggerty (*1970 in London, England), which are shown for the first time here, reveals restrained clear, schematic forms and consistent coloration. A closer look shows the capillary pencil strokes that assist the artist in his drawing process. Instead of erasing them afterwards, Haggerty shows them as basic elements of his works. In doing so, he discloses the creative process and the construction of the constructed.

The objects of Daniel Robert Hunziker (*1965 in Walenstadt, Switzerland) are positioned between installation and model. Their concrete sources are found mostly in constructions in ones daily environment to which Hunziker looks with the eye of a sculptor. The piece shown in the exhibition, ‘Corner’, 2009, reveals the artist’s particular interest in the interaction between light and material surface.

Robert Dowling (*1979 in London, England) gathers simple shapes from a wide variety of sources, which he recombines to produce complex recurring geometric works. Adopting a sculptural approach to making paintings that pop back and forth between 2- and 3- dimensions, his practice echoes and subverts the methodologies and processes of minimalism.

We could take David Renggli’s (*1977 in Zurich, Switzerland) work ‘ Strippen für Piepen (Striped bike Nr.3)’, 2009, (german for castle and lock) as though it were in a thwarted dialog with works of Minimalism, which are already considered traditional. The smooth, polished surface of ‘ Strippen für Piepen (Striped bike Nr.3) ’ displays, with a subtle irony, the object’s inoperability. With the reference in the title to Marcel Duchamp, we participate in Renggli’s view on the history of art, part criticque of Minimalism, part commentary on the heroizing of the modern ‘masters’ of Minimal Art.

In Sebastian Wickeroth’s (*1977 in Issum, Germany) floor sculpture, corrosion counters the formal, geometrical and monochrome perfection. But it is not about the destruction of a sculpture, but to create decomposition as an equal mode of construction. In using simple materials like plasterboard walls, wood, styrofoam and enamel, which are turning into room filling, extensive interventions in space, we could also disclose an artistic statement.

By his decision to entitle his work „Guess I'm doing fine (target)“, 2003, Stefan Sandner (*1968 in Vienna, Austria) sets off the traditional objectivity of Minimal Art. Through this title, the impression of coloured circles fitted into each other and placed on two triangular canvases is channeled toward the idea of a target. Accordingly, viewers’ interpretations of the work are directed away from the non-objective and abstract to the representational, while at the same time, undermining it through the use of combined shaped canvases reminiscent of Color Field and Minimal masters.

The exhibition also discusses the boundaries of Minimal Art. Does the viewer come to the decision arbitrarily if he or she views the work of Claudia Wieser (*1973 in Freilassing, Germany) as part of the tradition of Minimalism or not? Her fine line-making practice, which could be seen as at the edge of Minimalism, provokes the idea of Minimalism’s limits.
www.grimmrosenfeld.com