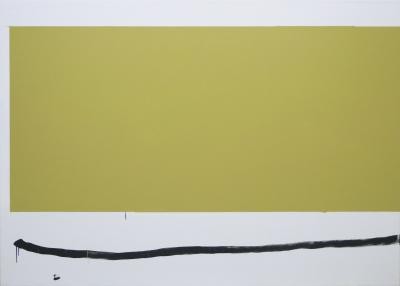 Andreas Grimm Munich is pleased to announce the opening of the first solo exhibition by Stefan Sandner in Munich.

„We can pose as the enemy to infiltrate the mechanics of the system to start its rot from the inside. Sabotage the empire by pretending to play their game, compromise just enough to call their bluff.” (Quotation from Kurt Cobain’s diaries)

There is hardly any way of trying to relate the art of Austrian artist Stefan Sandner (*1968, Vienna) to any well-known artistic style, despite or maybe even due to the diversity of allusions to art-historical discourses. By the appropriation of different artistic positions, Sandner is giving the viewer not just a broad hint, but many – which might be rather misleading than as adjuvant as it was expected by first sight.

The cursory impression of one of Sandners large-sized paintings on canvas, for example, which seems to be in a way a technical imitation of works by Cy Twombly, is to be revised or adjusted in addition of the context of the work: The black and yellow brush strokes turn out to be an oversized reproduction of a graphical ready-made – a handwritten note of an artist friend of Sandner, where she tried her signature and an edition number. Sandner intensifies the discussion on the originality and authenticity of an art work - which was initiated not just by Julia Warholas signature copies. But in the same moment he ridicules this argument by the double negation in his work. The question on the position of the artist as author of pictures, which is one of the central subjects of post modernist art history, opposes Sandner with his own, but also „borrowed“ question: „Does anyone have a means?“ („Hat wer ein Mittel?“)

Despite of the conceptual conformities in style with Appropriation artists like Sherrie Levine, Richard Prince or John Baldessari, Sandner opts for painting on canvas to appropriate stumbled material. While following this way taken, his art includes also the element of personal hand writing and individual brush strokes.

Stefan Sandner studied at the University for Applied Arts in Vienna, Austria. Among his numerous exhibitions in Europe since 1995 such as in London, Luxembourg and Basle (Art Statements, 2008, Galerie Grita Insam, Vienna), his solo exhibitions at the Wiener Secession (Vienna, 2006) should be highlighted. A well-illustrated catalogue was published on this occasion.
www.grimmrosenfeld.com