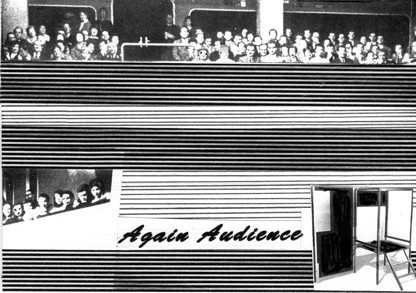 From March 23 through May 5, Galerie Andreas Huber presents Carola Dertnig’s third solo exhibition. The title “Again Audience” is programmatic. A curtain made of paper strips separates the entrance from the gallery rooms. Visitors have to pass this in order to see the exhibition. Carola Dertnig installs precisely the object, which separates the audience from the stage, the spectators from the actors in theatres as brink that has to be transgressed. Beside the physical experience, Dertnig addresses the issue of the audience on a textual level, too. “Again Audience”, a poem written by the artist, which makes her range of associations accessible for the visitors, is copied on the curtain. This text is also part of the video “Some exercise in complex seeing is needed“. The artist’s voice accompanies the monotone movements of a person swimming against the tide. A state of “rehearsal” is noticeable, as the title proposes.

Behind the curtain is the stage: Dertnig assigns this traditional structure to the gallery, and shows a stage, or rather a speaker’s desk in the second room. For this, she draws on Alexander Rodchenko’s Workers’ Tribune. The workers’ tribune was part of his Workers’ Club, a common institution in the USSR in the 1920s. Workers’ clubs served as ideological agency for the political fight and distinction from bourgeois life forms. They were regarded as spaces for cultural leisure activities for workers, which based on education, participation, and an active debate with artistic, social, and political ideas. With Rodchenko’s designs, the Workers’ Club became known worldwide.

Contrary to Rodchenko’s design, Dertnig’s speaker’s stage is a freestanding, mobile element for outdoor space, which can be folded up. Dertnig redesigned Rodchenko’s workers’ tribune for everyday use. The extendible size of the scissor fence determines the spatial presence of the performance. This piece is supplemented with photographs of a person installing the stage and who is just about to use it. This object’s “everyday use”, as proposed by the artist, means the transition of performative and political practices to daily routine.

The view from the stage reaches through the whole gallery space, on which rear wall one of five collages can be seen. This series deals with photographs of historically important performances. However, Dertnig selects the audience, and not the performers, as her motif, and posits these fragmented groups of people in a new, largely abstract, context. Thus, the collages are documents of an audience and performance history on the one hand; on the other, they create a space of its own, in which actions are made and conditions are redefined. Image details, which are used twice or threefold here, create a filmic effect. Dertnig introduces video, the medium that is so crucial for performance art, to the actually still image. It becomes clear that a refection on performance, performance history, and feminist practices are only completed when questioning the spaces, tools, and media of performance art at the same time – only with this can they develop new potentials.
www.galerieandreashuber.at