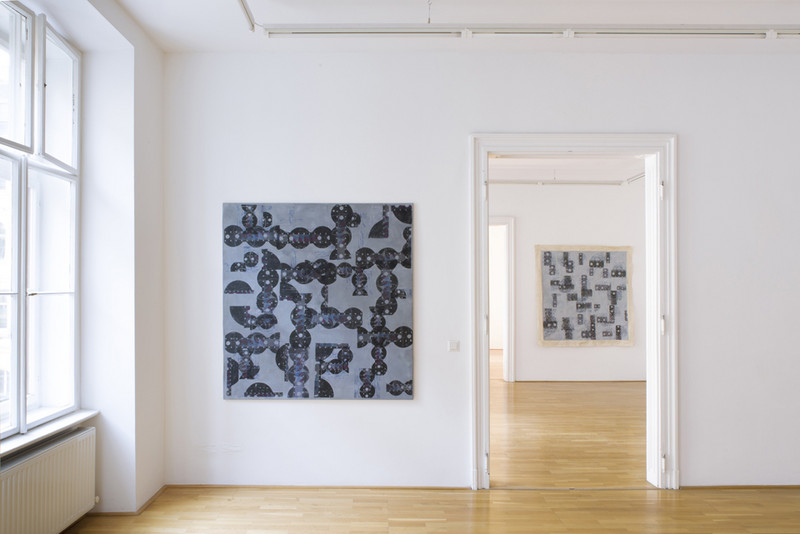 Carola Dertnig focuses in her solo show upon questions of attentiveness that amalgamate diverse genres, such as painting, film, textile arts and performance; in turn, these genres reflect upon status via the choices of material, actively engaging with appropriation as an art form, itself still undiminished in it presence and currency today.

Leftover copies of film strips that the director, Ernst Schmidt Jr. had himself reworked with paint provided the starting point for Dertnig’s large-format, almost square compositions; having initially obtained them from the director’s brother, Helmut Benedikt, Dertnig proceeded to copy and likewise rework them.

The copy of a copy of a copy is also an original work. The reworked paper copies of leftover film material were incorporated into a composition on a painterly, primed canvas as a new collage of copies. Each fragment of the collage was subjected to an elaborate, repeated transfer technique ultimately to be sponged down to the last layer; the process is reminiscent of conservation and restoration practices. Dertnig’s method of photographic transfer printing also focuses upon variety and the particularity of the individual feature: each partial motif has to be processed individually, superimpositions and layering occur as a result of the repetitions, extreme care and attention is required in order not to damage anything, and, in a similar way to the careful, painstaking uncovering of a fresco, it is an acknowledgement of something that is already present.

Carola Dertnig primarily engages with things that are normally neglected or that would not attract any particular attention: leftovers, the canvas, primer, printing techniques.

Handicraft rather than a showing-off, a recognition of the “lesser” practices – not then an express reconciliation of handcraft and art, rather a pervasive awareness for the oft-ventured “subtle distinctions” throughout via consideration of both. With this observation embedded in her artistic production Dertnig contributes to level distinctions: presumptuousness is meaningless in the face of careful dedication.

Genres do not mutually cancel one another out – performance, film, documentation and painting still contain the potential to embark on paths as yet untrodden. It is not without reason that the patterns in the paintings seem to dance. At this point, documentation is transferred into a form of choreographed painting and textural sensuality. At the same time, documentation is related back to a specific tradition, for instance, that of the textile arts, the narrative repertoire of which being defined by motifs and symbols, by the documentation of our human view of the world. In Dertnig’s case, this becomes a documenting of artistic acts and processes that have been abstracted, appropriated and artistically reworked.

Let us once more appreciate the unequivocal and enormously diverse gestures of appropriation that Dertnig has called upon for this show: Dertnig’s transformations, her paintings veritably exude her essential, balanced appreciation for everything that inheres within them. Her paintings do not depend upon a silent annexation that merely enhances its own self-referentiality, nor are they palmed off on the art system as autonomous. On the contrary, they are a compositional reflection of this very system, be it in terms of aspects of ownership, value, methodologies, conditions of production or presentation labels – art system define yourself! Why won’t you. It’s not as if we are asking anyone to rob a bank.