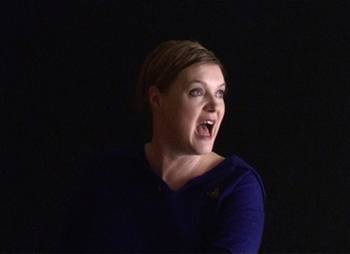 In her show "global player since long before Christ" Magda Tòthovà (born 1979 in Bratislava, lives in Vienna) presents space-filling objects. In her work, she repeatedly uses urban space as a field for artistic actions and manifestations, and stages everday as well as abysmal scenarios.
In the current show, too, she revolves the cosmology of an art form that's approaches show references to the Slovak conceptual artists Julius Koller or Stano Filko.
"It only needs a few trimmings, and the sun were born. Since then, it reflects more than merely a universe. This way, we once lost ourselves in it and found the beginning again, and lost ourselves anew." (Magda Tòthovà)

For the video "Angelika Elektra" Heimo Lattner (born 1969, lives in Berlin) wrote an Electra monologue, that picks up and intensifies all the roles ascribed to Electra in various adaptations and contexts, from Aeschylus to Sartre, Schleef and Jelinek. Electra is waiting for her brother Orestes who is supposed to take revenge for her father's homicide that was committed by her mother and her mother's lover. On the borders - of the palace, of a decision, in the pure present - she demonstrates the conflicts of power and powerlessness, of resistance and order, of masculinity and femininity, of opinion and consequence by incessantly struggling with these borders.
In the video performance, Heimo Lattner shows an almost contemplative image of a woman sitting in a scantly furnished room. In an almost unbearable way, the woman's speech contradicts this staging, that refers to the formal canon of classical portraits, and thus makes this existential situation that Electra can hardly cope with almost tangible. Electra is shown as well-behaved girl playing the violin and fanatic assassin, as pushy know-it-all and abysmal desperation. In this sense, Electra is a screen for projections, however not like a badge or a poster out of a fanzine, but rather as an unsettling question.