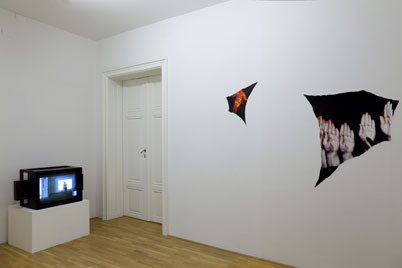 At the beginning of the last century, „Poésie sonore“, sound poetry, emancipated itself with an air of self-evidence from the common use of language – to describe, name, or express something. What it could not so readily rid itself from was the script and the problem of visual representation of sounds. Kurt Schwitters declared the alphabet to be deficient, and struggled to develop an adequate notation for sounds. „Better than to read is to hear the sonata“, he remarked on his „Ursonate“. Yet he didn’t find a solution to this problem.
For Henri Chopin, born 35 years later, very different resources were available for developing sound poetry. He was one of the first to test new modes of poetry with means of electro-technical recording equipment. He used the technical innovations to demonstrate that not only the voice, but the whole human body can „talk“, make sounds and, thus, create poetry. However, scarce possibilities to transfer these to scripts and the common forms of writing stood in his way. They reduced sound poetry’s potential, diverged poetry from the human voice, and from the human body. Thanks to a variety of experiments he invented new methods for recording/writing.
Still, the performativity of language is not a specific of avant-garde forms of literature, quite the contrary. Already since the mid 20th century but no later than the 1990s, speaking is no longer primarily perceived as something that describes actions, but as action itself, as performance.
The exhibition Poésie Sonore unites artistic positions which, despite great varieties with regards to the media, approach, and generation – one can note something in common. Beside works and archive materials from Henri Chopin and drawings of performance artist Joan Jonas collages by Carola Dertnig will be presented. The young Swiss artists Aloïs Godinat and Tobias Kaspar are represented with sculptures and photographies, in which – in their process of production – performative processes are immanent and present.
www.galerieandreashuber.at