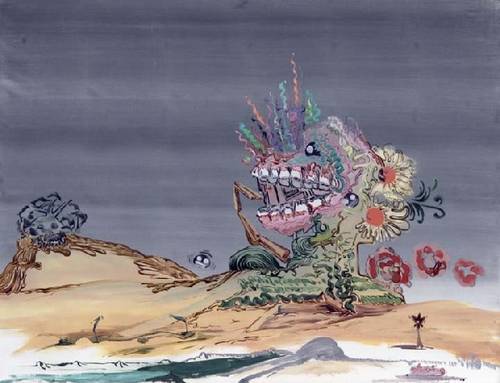 Andréhn-Schiptjenko takes great pleasure in announcing Johan Nobell as the first exhibitor of the year 2006. Nobell, born in 1963 in Gammelgarn, Gotland, Sweden, has spent time in New York but is currently working and living in Stockholm, Sweden. This is his second exhibition in the gallery and it will be accompanied by a publication titled Bye-Bye Tumba with a new text by American writer, artist, and critic Tan Lin. His work will also be exhibited in Abstract Athletics: New Positions in Painting in Brænderigarden, Viborg, Denmark (catalogue available), January 14 – February 28 2006.

Nobell is considered to be one of Scandinavia’s most original painters to have emerged in recent years and has indeed developed a pictorial language all of his own. His small to medium size canvases are ambiguous, quasi-narrative and oscillating between the figurative and the abstract. Being to a large extent influenced by the aesthetics as well as the economic geography of the American landscape his paintings are at once mysterious and stark.

While Nobell’s landscapes may appear dystopic in their view of Nature and the practice of landscape painting, his subject matter occupies a hazy, pastel-hued no-man's-land between fantasy and reality, an often cartoonish terrain that brings to mind the work of Philip Guston and Carroll Dunham. His paintings depict surreal, apocalyptic scenes with wry and witty imagery. Using vivid colors and a hyper-real, cartoon-like style, he pulls the viewer into seemingly definable narratives that prove ultimately elusive

I constantly strive for the slides between the narrative and the formal but without looking for absurdities. The details shall act as guerilla-troupes, making the paintings vibrate with threat, conflict and contradictions. Johan Nobell in Svensk Konst Nu, Wahlström & Widstrand 2004

The exhibition opens January 12 at 5-8 pm and runs through February 12. For further information or visuals, please contact the gallery.
The gallery is open Tuesdays – Fridays, 11-5 pm, Saturdays 12-5 pm.