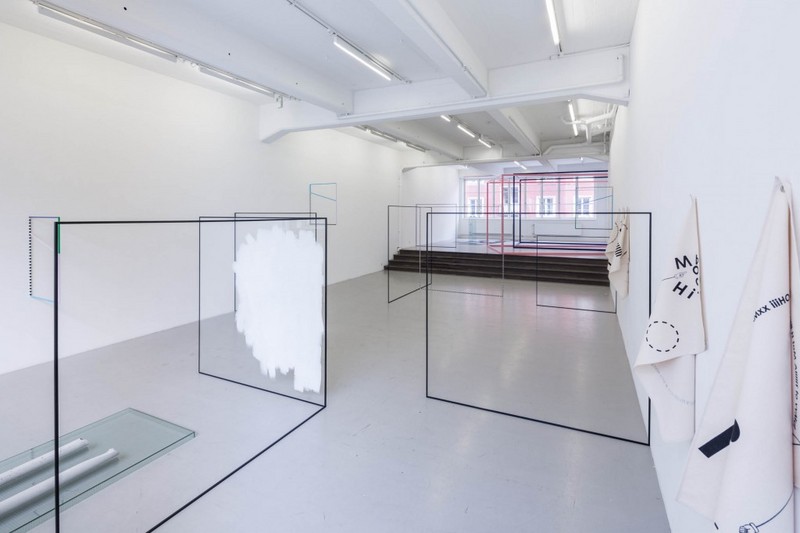 It is with great pleasure we announce the opening of José León Cerrillo’s first exhibition at Andréhn-Schiptjenko, which will be the artist’s first one person-show in Europe. The opening takes place in presence of the artist on Saturday April 5, 5-8 pm.

The exhibition will give a broad introduction to Cerrillo’s œuvre. A major piece will be a site-specific structure that transects the gallery and its walls, made out of cut and welded powder coated aluminium frames. The metal frame as material will be recurrent in a series of smaller sculptures. There will also be a series of sculptures made of glass, concrete and plaster, as well as a series of two-dimensional works, silk-screens on canvas.

Using language – as system of meaning with inherent flaws and implied power structures – as a starting point and drawing from graphic ideologies, linguistic systems, constructivism, geometric abstraction and modernist iconography, Cerrillo explores the possibilities of genuine abstraction through a wide range of media, from printed posters to sculpture, installations and performance.

The abstract is by definition un-representable. In his work, Cerrillo regards the concretization of the abstract as a series of failed forms; a representation of a void or an absence that inevitably points to yet another thought that is again abstract. His installations as a whole could be a way of analysing the transformation from the abstract to the concrete and the necessary representations of it through language.

José León Cerrillo (born 1976) lives and works in Mexico City. He received his BFA from the School of Visual Arts and MFA from Columbia University, both in New York. Recent projects include The Wittgenstein Suite, 2013, in collaboration with Sara Lunden, a series of songs and performances based on elements from Wittgenstein’s book, Bemerkungen über die Farben (Remarks on Colour) and EXPO 1: New York, MoMA PS1, New York + Triple Canopy, curated by Hans Ulrich Obrist & Klaus Biesenbach, New York. His work has been shown in Sweden within the context of the groupshow Abstract Possible, Stockholm Synergies, Tensta Konsthall, the 2012 iteration of a the Abstract Posible presented in 2011 at the Museo Tamayo, curated by Maria Lind.
www.andrehn-schiptjenko.com