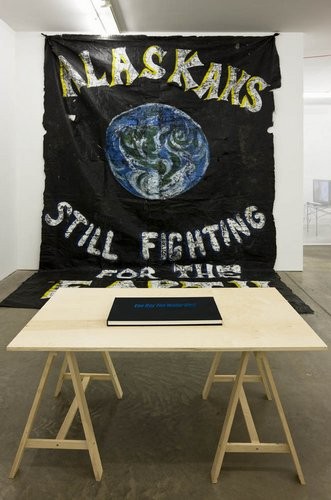 The Andrew Kreps Gallery is pleased to present Andrea Bowers’ new exhibition, entitled Mercy Mercy Me. Released in 1971, this influential Marvin Gaye song was, and still is, one of the most popular songs of all time that addresses the degradation of the environment, and other pressing social and political issues. Bill McKibben, American environmentalist, recently wrote about Mercy Mercy Me., “For a brief moment. . .it made perfect sense for the civil rights and environmental movements to be singing the same tune. Tragically, those movements soon diverged - diverged so far that some people still find it odd that activists are working side by side again on issues like global warming and poverty.”

In her current exhibition Bowers investigates the complicated politics of dealing with the contemporary idea of landscape and the problematic relationship of predominantly Eurocentric environmentalist’s attempts to collaborate with locals to fight against climate change. Almost without exception the most endangered locales are populated with people of color and those with low income. And despite their intrinsically humanistic attempts to help, human rights organizations, corporations interested in sponsorship and the Green Movement struggle with compatibility. This exhibition began with a trip that Bowers took with a small group of activists to the Arctic Village in Northern Alaska in the summer of 2009. It is a village of about 150 Native Americans, called Gwich’in, and is located in the southern edge of the Arctic National Wildlife Refuge.

The exhibition includes a group of four video projects, several drawings, books, beading and ephemera from past protests. Circle is a video that combines panoramic landscapes with interviews and footage of four generations of women from the Arctic Village. These women, some of whom are part of the activist organization, The Gwich’in Steering Committee, eloquently express the urgent needs of their people for the prevention of oil drilling in the Arctic National Wildlife Refuge and the protection of their lands from global warming.

Interview with Betty Ann continues Bowers’ interest in storytelling but for the first time she turns the camera on herself to tell a story about her correspondence with a woman bead artist that she met at the Arctic Village. A third video, which was recorded this summer, documents a tree-climbing lesson given to Bowers by environmental activist, John Quigley. This piece, focusing on the metaphor of ascension, encapsulates the good intentions and hopes of the environmental movement and continues Bowers’ interest in choreographic movements resulting from political action. Also part of this exhibition are works that reference the Exxon Valdez Oil Spill and Alaskan beading traditions layered with environmental activism.