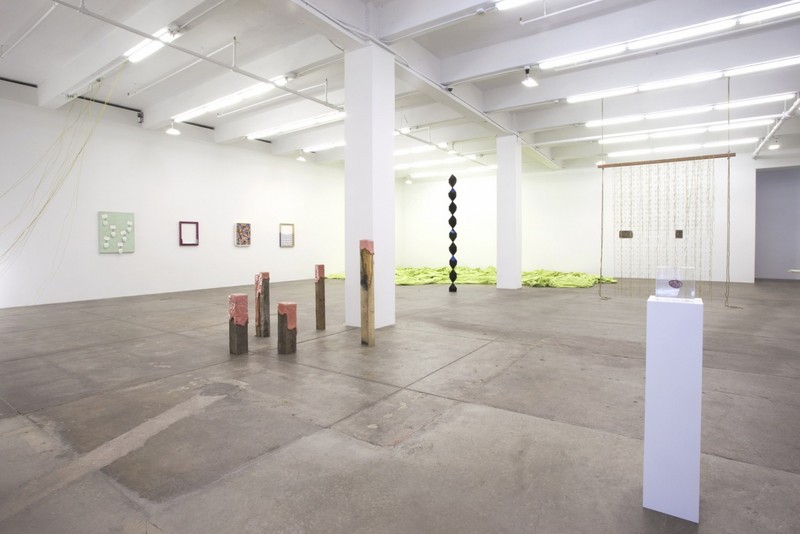 The Andrew Kreps Gallery is pleased to present Animal Mineral Vegetable, an exhibition featuring the work of six artists, all of whom push their respective mediums beyond conventional constraints. Eschewing well-worn methods, mediums and rules, the works included in the show foreground the de/reconstruction of material, physics, chemistry and gravity.

Navid Nuur’s work cannot be adequately described in terms of sculpture or installation alone. Phenomenological in nature, the relatively simple structure of his works combined with the choice of effectively banal everyday materials makes up the foundation for the bulk of the Nuur’s works. Tentacle Thought is created from the fluorescent light system from the gallery ceiling, that is partly functional but removed from its fixtures and draped/hung together. Resting in a geometric configuration on the floor, the sculpture creates a “light-emitting body rather than an object that simply channels light.”

The sculptures of Swedish artist Nina Canell are made of everyday materials such as chewing gum, wood, and electrical wiring highlighting the inherent or imminent movement within – as well as the danger of their own collapse. Brazilian sculptor Erika Verzutti’s works also reference common, quotidian items like fruits, vegetables, and eggs conflated with ceremonial forms, such as totems, tablets, and gravestones. Imbued with a sense of mysterious ritual, Verzutti’s sculptural works in the show resemble denizens of alternative worlds located somewhere between the real and the fantastic.

An expansive floor sculpture that takes the form of a huge quilt by Giuseppe Gabellone cuts an undulating path through the gallery like a large expanding stream – in contrast to the rigid, white geometry of the gallery, slowing down the pace of the viewer. Two bronze wall works by the artist further amplify the relationship between form and space, as a counterpoint to the soft sculptural expanse.

American artist Dianna Molzan’s canvases engage in an open and unpredictable dialogue with the history of abstract painting. While Molzan uses a variety of material each painting exhibits a subtle precision in its intention and execution. The works in the show seem disparate and all immigrate beyond the confines of their supports. In contrast, the underlying presence of the grid is the most striking feature of Leonor Antunes’ sculptural pieces based on woven wall hangings by Anni Albers (1899–1994). Although this work appears highly formal, and measured, utilizing techniques borrowed from vernacular traditions of craftsmanship, Antunes’ sculptures reveal a floating, inexplicable language that defies the design of their own making.
www.andrewkreps.com